Posted on October 30, 2010 by LBcruiseshipblogger

Day eight: We woke up to another sunny day on our InnerSea Discoveries cruise. This time in the Misty Fjords National Monument. Other than a touch of early morning mist, Walker Cove where the boat anchored up for the night remained mist-free.

Kayak in the Morning Light

Some people went for an all day one-way paddle in kayaks. The early morning light made for some interesting photos with reflections of the brightly colored kayaks in the water. Safari Quest picked the long distance kayakers up later in the afternoon on the way out.

We followed them for a bit and saw all sorts of sea life clinging to the rock walls. The walls dropped just as steeply underwater as they rose above it. Lots of sunstars, starfish, seaweed, and some crabs. Amazing how those crabs can scuttle along on a near vertical wall without falling off.

Curious seals popped their heads out of the water nearby, swimming toward the kayaks for a closer look. A tiny cove led to a waterfall. It seemed to erupt from the ceiling of a tiny cave up close, but from a bit farther back it ran down the entire hill. Everyone paddled their kayaks in for a close look at the waterfall. One kayak got a bit too close. It’s a pretty cold shower under an Alaskan waterfall. 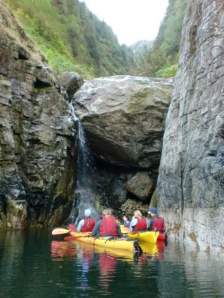 We paddled on, enjoying the scenery. A tree grew on a low ledge, not far above the water. About 30 feet up it ran into another ledge. From some angles the upper ledge looked like a ceiling, stopping the tree from further upward growth. From the other side, a kink in the trunk showed how the adaptable tree grew right around the ledge, resuming its upward climb above it. We paddled along for awhile enjoying the magic of nature in all her splendor. Eventually we parted ways with the group, heading back to the yacht while they paddled on.

For lunch we had clam chowder and do-it-yourself sandwiches. Dessert was orange poppy seed cake.

Tree in the Rock Wall

“Actually it is an octopus,” Mary (who works on the boat) said.

I stepped up where floor rises to the next level, 8 inches or so higher. “It does look like an octopus from here.”

“Don’t tell the pastry chef we didn’t know what it was,” Donna said.

The important thing is, it tasted good.

After lunch anchors away and off toward Punchbowl Cove, picking up the kayakers and anyone who went out for a last minute skiff ride along the way.

En route to Punchbowl cove, some people got off for a skiff tour, planning to rejoin Safari Quest there. Sitting in Punchbowl cove, waiting for the skiff to return we marveled at the near vertical granite walls towering above our heads, giving the cove its name. On our sunny cruise we could see the tops of all the walls. I sat in the bow of the boat and imagined what it might feel like on a misty day. With the cliff tops nowhere in sight the boat could feel no more significant than an ice cube floating in a giant punchbowl obscured by the rising fog of dry ice. Finally the skiff returned, its occupants cold, but happy as they had seen a bear. They saw an elephant seal too, which they nearly ran over assuming it was a log.

After dinner people shared their worst trip ever stories. Most involved lost luggage. Art took the cake with his tale of a cruise in a hurricane that destroyed all the ports so the ship had nowhere to go. The captain kept the boat afloat by hiding on the leeward side of islands. Not an easy task when that is subject to change at the whim of a wild wind. They fell right out of their chairs in the dining room, rolling until hitting something solid. Sleeping involved finding solid objects to sandwich themselves in between in order to stay in one place and not slide into things. To top it off, he needed badly to get off the ship to attend a funeral, though at that point everyone wanted off the ship regardless. Far from never wanting to cruise again, he eventually became a cruise writer and cruises frequently.

John had a pretty good tale too. Sitting at the airport in South America, a large group of military types with big guns announced they wanted to use his luggage to train their drug sniffing dog. Unable to refuse big guys with bigger guns, he watched as they inserted a large brick of contraband into his bag. He wondered if this was a set-up for his arrest. Soon another rough looking bunch came by with a dog that completely ignored him. The next group sadly removed the drugs. Now he was left to wonder if dogs back in the US would sniff him out for the residue of the drugs that had been there. And who would believe that wild tale if they did?

Not having any travel disasters of my own to share, I interjected with the only story I had. Sticking to the subject of airport dogs, I recalled the time in Australia when we all had to set our bags down for the fruit-sniffing beagle. The old lady next to me had an open topped shopping type bag. The dog dived in and dug away, searching frantically.

“I had an apple in there yesterday,” she said sheepishly.

Yes that was the best I could do. Pathetic, I know. Well I did have the one about canceling Christmas. We were supposed to go to Australia to visit our daughter for Christmas, but due to John’s work schedule we departed Christmas Eve. And arrived the day after. Yup, you lose a day on the way over. So in protest I bought no gifts, mailed no cards, did no baking or decorating, and you know what? Easiest Christmas ever, it was actually kind of a relief not to do all that what with all the traveling.

That evening we had a slideshow. Along with the official ship’s slides of the journey

taken by Kevin, we also each added some of our own. I was thrilled that people liked mine. I had been a bit nervous about that. They are all experienced professionals with fancy cameras. I am new at this with a little point and shoot digital and no giant telephoto lenses like everyone else has. I had some different sorts of shots though as most people like to get objects out of their pictures and I like to work them in for added interest when I can.

Un-Cruise Adventures is now the name of what used to be InnerSea Discoveries and American Safari Cruises.

MyCruiseStories blog tells stories about adventures in cruising on ships big and small. Things to do onboard and in port. Anything connected to cruising. Also food, travel, recipes, towel animals, and the occasional random blog.
View all posts by LBcruiseshipblogger →
This entry was posted in Alaska, Un-Cruise Adventures and tagged adventure, cruise, fun, kayak, Misty Fjords National Monument, nature, travel, yacht. Bookmark the permalink.