Posted on September 9, 2022 by LBcruiseshipblogger

Bonaire is rumored to have some of the best snorkeling in the Caribbean. On our cruise on Celebrity Constellation, we booked what they billed as a Double Dip Snorkel excursion. Our original booking was for 8:30am, which would give us lots of time to explore after the excursion. A couple days before the port we got a notification that the time had changed to 11:30, which was the second time option offered for that tour. Apparently they did not have enough people to fill two runs and the ship chose to put everyone at the later run, though the Sea Cow crew said the earlier one would have been preferable for both weather and having less other people in the area. They mentioned not being able to convince the cruise ships of that so they must all cancel the earlier time slot when two are offered and don’t both fill. Which is unfortunate for passengers wanting more time after their excursion to see other things. The ship stayed in port until 8pm, so we did still have some time to see part of the island afterword.

While our original meeting place at the early time was inside the ship, for the later one it was out on the dock. We went out a bit ahead of the time, which turned out to be too early for our meeting point to be ready so we wandered into the closest port shop to kill some time. Should have stayed there a bit longer because just as we got back the wind whipped up and blew down most of the canvas shelters the ship people had set up on the dock. Only a couple right where they check people’s ship cards were left standing when the rain began to pour buckets. Waiting under that wasn’t helpful as it was pretty much raining sideways in the wind so we went back into the ship for about 5 minutes until the actual time to meet. We had to scan our cards and belongings to get in, and cards again to get back out a few minutes later, but within that time the rain had stopped. We got pretty well soaked in the few minutes we were out in the rain, but we were going to get wet snorkeling later anyway.

The SeaCow is an open sided boat with a canvas top over most of the seating, but not all of it. It wouldn’t have kept anyone dry the way it had been raining so it was a good thing the rain didn’t last long. The sun came out about the time we got to our snorkel spot at Klein Bonaire, a small uninhabited island about half a mile off the coast of Bonaire. The three crew who were not the captain each had a group to follow them once people got in the water, group numbers assigned according to where people happened to sit in the boat. We were group 1 and went with the one female guide. Once a full group was in the water and ready they set out, mainly drifting with the current, but going deeper or shallower depending on what there was to see. Once all 3 groups were off and snorkeling the captain untied the boat and it followed. Somewhere along the line the boat went ahead of everyone and stopped at the point where we were to get back in.

Along the way we saw lots of coral, some of it pretty big for what you usually find in the Caribbean, and in most areas more plentiful. There were also lots of fish. The fish are generally more colorful than the coral. Caribbean coral is mostly brown or yellow, not like all the colors found in places like Australia’s Great Barrier Reef. There was a variety of corals. Some areas had a mixture of different types and others had one predominate variety.

There were lots of purple tubes, some of which were quite tall. Our guide identified them as tube sponges, which she said only grow about an inch a year, so the bigger ones were quite old. 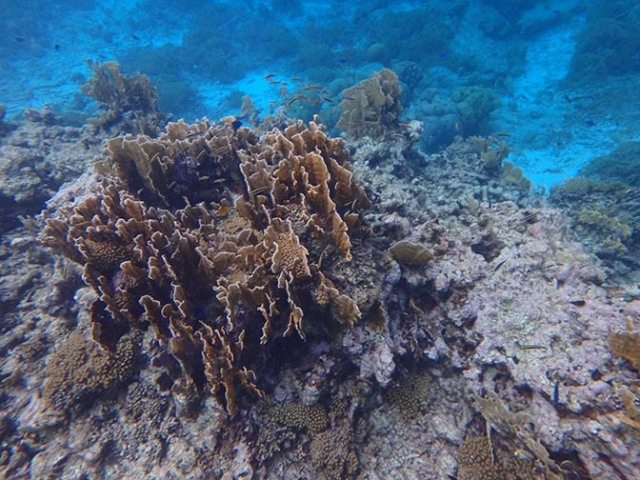 There was also fire coral, which is not actually coral, but a relative of jelly fish and it will sting you if you touch it. It rather resembled seaweed, except that it was solidly fixed in place rather than waving in the current like actual seaweed. This fire coral did not look at all like the fire coral we saw previously on a snorkel excursion in Belize. There were a lot of soft corals which do wave in the current like seaweed. Also lots of brain coral and some pretty big elkhorn coral. We saw some fan coral too and some other types as well.

A turtle swam below us for awhile, the only one we saw. The uninhabited little island we were by has turtle nesting grounds, but it was not nesting season when there would have been a lot more turtles. Klein Bonaire (Little Bonaire) is a marine preserve so nobody can build anything there to save the turtle nesting areas from destruction.

Later we came by what the guide referred to as Christmas trees. These branched metal structures had little bits of coral hanging from them, something Bonaire does to accelerate the growth. Once the bits have grown to the size they want they are glued onto places in the reef that need restoration. They’ve had an over 90% success rate with over 30,000 bits used in restoration of their reefs. The work is all done by a volunteer group, of which one of the guides on our boat works with. It probably helps that Bonaire is south of the area of the Caribbean normally hit by hurricanes, which can severely damage coral in those areas, but there are still all the other issues that affect coral like water temperature, pollution, PH, and human activity. With Caribbean reefs generally at an 80% loss, restoration is definitely important, though this was the first place we have seen any effort to do so. Every person in Caribbean waters (or anywhere else where there’s coral) can do their small part to help save the reefs by using reef safe sunscreen instead of harmful chemical sunscreen. 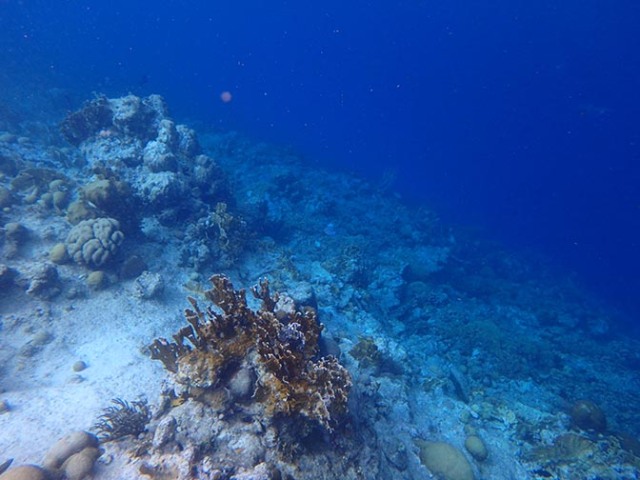 drop-off by the wall

After everyone got back in the boat they served juice, water, or soda before going back out for our second snorkel run. That’s why the excursion is called double dip, 2 different snorkel sessions along different areas of the little island. The water felt noticeably colder the second time in, probably due to the depth. It was a shorter run that went along the edge of the island where the land drops off from a shallow ledge at the shoreline to much deeper water. All sorts of coral grew vertically out of this wall. The wall went straight down for a ways, then sloped steeply into an abyss so quite a lot of the coral in that area grew out of the wall, though some was beneath us on the upper part of the sloped area before the bottom disappeared into the deep dark blue of the depths.

The wall had some ins and outs and pockets or hollow places where fish could hide. The corals often grew horizontally out of the wall and then turned to vertical growth where they had some room to spread without being up against the wall. While brain coral is usually round, there were a few sort of U-shaped ones in that area.

fish in the coral

Fish came in all sizes and colors. There were many female parrotfish, who are not nearly so brightly colored as the males. They still do their job of scraping algae off of coral though. Parrotfish are an important part of the ecosystem, keeping algae from growing too thick and suffocating the corals. The sandy beaches of the island are all made up of tiny fragments of coral pooped out of parrot fish. Most people on those beautiful sandy beaches have no idea they’re hanging out in ancient fish poop. 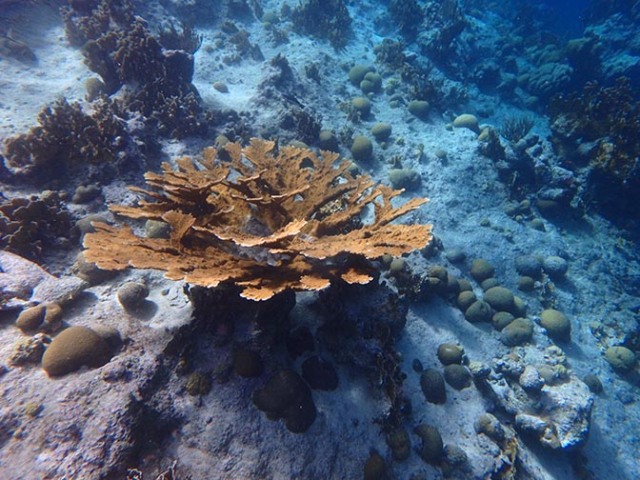 The boat drifted along and came out ahead of all the snorkelers again on the second round. Snorkeling with the current is definitely a lot easier than swimming against it, especially in places like that with a pretty strong current. It’s no work at all to go with the current, just relax and let it take you – as long as you pay attention to where you are going and stay out of the coral and rocks. In this case also staying with your assigned group.

fish by the wall

Back in the boat they served rum punch and other drinks on the way back. That’s pretty standard on Caribbean snorkel excursions. If they are going to include alcohol it is never before the snorkeling is finished. On this boat their punch had a higher rum to punch ratio than usual. Pretty strong stuff. Once we got back the boat docked right in front of the ship in the same little dock where it had picked us up. We had just a few yards walk to get back to the ship from the drop off point.

Manatees are sometimes called sea cows. It is highly unlikely anyone will see a manatee in Bonaire, but not totally impossible as there is at least one confirmed sighting of one in their national marine park. The most likely sea cow anyone will find there is the boat on which we took our snorkel tour. This was one of the better snorkel tours in the Caribbean as there was more coral than most in Caribbean places, likely due to their restoration efforts.

MyCruiseStories blog tells stories about adventures in cruising on ships big and small. Things to do onboard and in port. Anything connected to cruising. Also food, travel, recipes, towel animals, and the occasional random blog.
View all posts by LBcruiseshipblogger →
This entry was posted in Caribbean, Celebrity, Constellation, Ports of Call, Shore Excursions and tagged Bonaire, cruise, photos, Sea Cow, shore excursion, snorkel, travel. Bookmark the permalink.

2 Responses to SeaCow Snorkel in Bonaire