Posted on June 19, 2020 by LBcruiseshipblogger 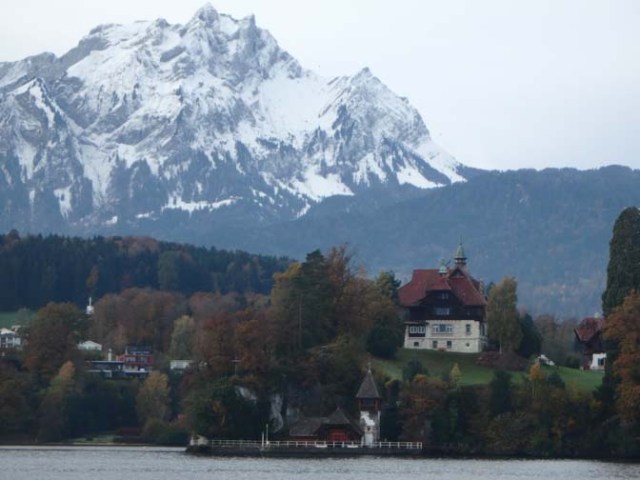 Mount Pilatus looms large in the views over Lucerne, Switzerland. For centuries it was forbidden to climb it. Medieval legends had dragons inhabiting the mountain’s rocky crevices. From the right viewpoint the mountain appears to be shaped like a sleeping dragon. People of the middle ages also believed the lake below the mountain harbored the restless soul of Pontius Pilate who committed suicide after allowing the crucifixion of Jesus. They said his ghost came out of the lake once a year on Good Friday to wash his hands with the blood of Christ.

boat at the dock in Lucerne

Trips to the mountaintop are now a major tourist attraction with access by either cogwheel train or aerial cableway and gondolas. Tickets can be purchased in various locations for all or part of a trip up the mountain. The tourist info booth right at the train station in Lucerne sold a variety of options with their golden round trip including a boat ride and bus as well as the mountain transport.

view from the window in the boat on Lake Lucerne

We just happened to stop in there 15 minutes before the only boat of the morning was scheduled to leave so we went with a package that included the boat, train, and to get back down the gondolas. Our journey started at slip 5 at the docks next to the train station. From there the boat made a trip just shy of an hour to Alpnachstad and the lower train station. 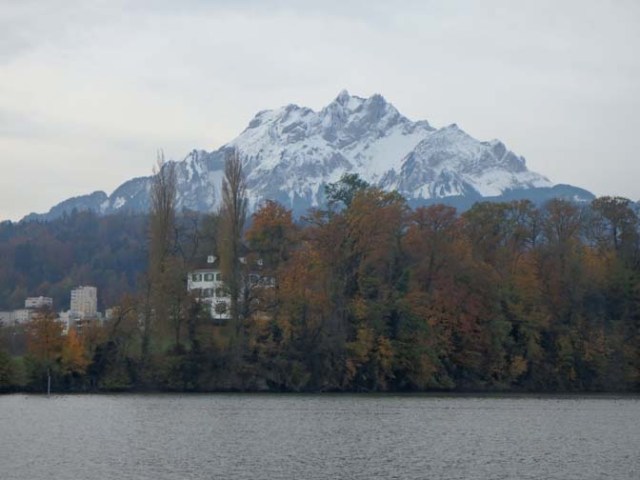 view on the boat ride

People can also get there by bus. Bus fare was not included in our ticket, but the guest house where we stayed gave us a voucher for free bus service during our stay in Lucerne so we could have saved the boat fare and gone to the cogwheel train by bus, but we wanted to take the boat ride, which was quite scenic. We did use the bus at the end of the day to get back to town after taking the gondolas down the mountain. 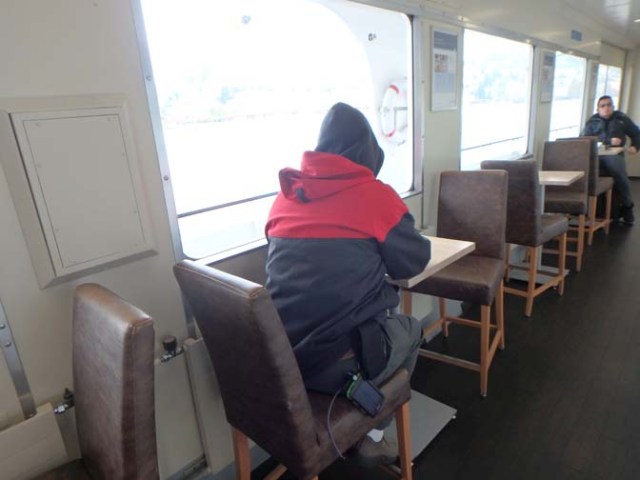 table by the window and a radiator

Mountains were always in view during our transit through Lake Lucerne. Parts of the shoreline were dotted with old Swiss chalet style buildings, while some areas had a more modern (and crowded) look. At one point we could even see the cableway descending the mountain. Also a helicopter buzzing around the mountainside carrying trees down from up high and dropping them off about midway down. 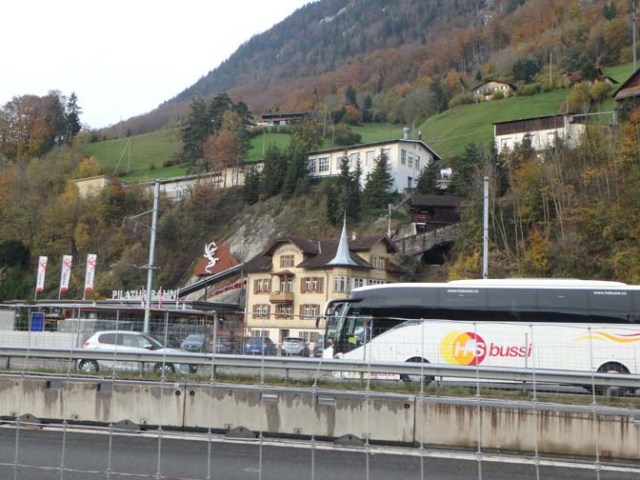 view from the boat dock at Alpnachstad

The ride was quiet and peaceful. We found a table next to the window which also had a
heating panel next to it so it was a cozy spot with a great view. A lot of the tables on the ship were in restaurants, but not wanting to order anything the one we found was just in a hallway.

cogwheel train station at the bottom of the mountain

The boat docked across the highway from Alpnachstad, but there was an underground crossing so nobody had to dodge cars to get there. The railway is billed as the world’s steepest cogwheel railroad with grades up to 48%. Each car moves up the track individually, though several left the station in a row staying fairly close to one another on the way up.

Mostly it’s just one track, but there was a place partway up where a second track allowed cars going opposite ways to pass by one another. The stations at the top and bottom also have two sets of tracks except at the very end where empty space allows the last bit of track to move over and bring the car from the up track to the down track or vice versa. When we got there several cars sat at the bottom waiting to load.

A few more came down the hill and parked next to the ones already there in the space where there were 2 tracks rather than just one. We got into the back compartment of the car at the bottom. The top one left, the next one moved up a bit, and ours moved up behind it.

leaving the station and heading up the hill

The bit of track our car had just vacated slid sideways across the cement ground and aligned itself with the end of the track where the cars that had just come down waited. The front one of them drove down onto that bit of track and it slid back over to the boarding stairs just below our car. It filled immediately with a large tour group. The one ahead of ours had a tour group from a Viking river cruise excursion, but ours was about half empty with just other random people who went there on their own like us so we got a whole compartment to ourselves. 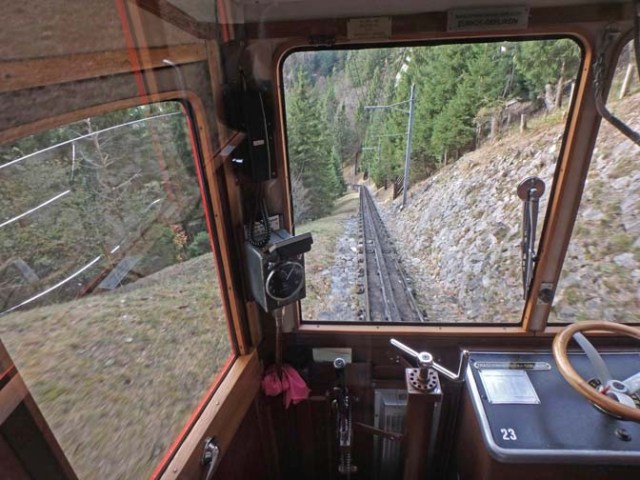 The back window overlooked a steering area, which is where the driver sits on the way down when that end becomes the front. Our driver sat at the other end, which is the front on the way up.

The grade ranged from not that steep to the max of 48% over different areas of our ascent, the least we noticed being 18% for a short stretch that seemed flat compared to the rest. The train went quite a bit faster through that bit. Periodically signs next to the track gave a grade range for the next section which would say something like 18% to 30% or 40% to 47%, with most of it over 30%.

looking back to a tunnel we passed through

The train passed through a number of tunnels on the way up. Some areas were wide
open, others had rocks, trees, or railroad structures right next to the track. There was a window on either end of the compartment that those inside could crank open for photos (or perhaps for air in the summer), but a sign on the window said not to lean outside.

Probably because if people weren’t paying attention and hanging any body part out in an open area they could suddenly find said body part smacking into solid rock or other objects. The bottom of the mountain was clear of snow, but eventually the train reached a high enough elevation where everything outside was covered in it, even some of the in-between portions of the track where the train doesn’t actually touch. Most of the track ran in a straight line going directly up the hill, but here and there it turned or snaked around a bit. 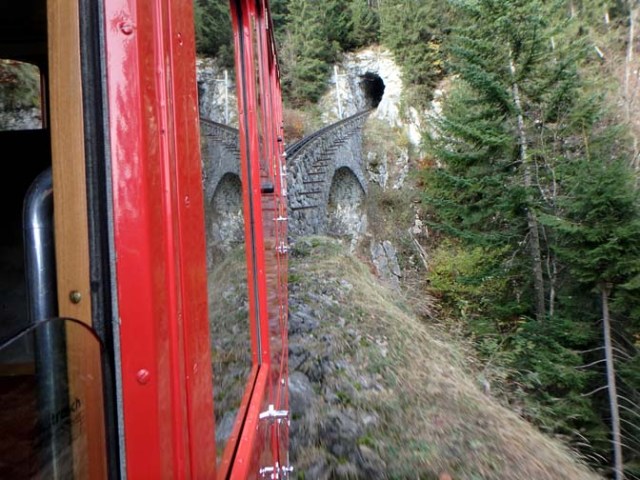 looking up to a bridge we were about to cross

Some portions were elevated a bit and here and there it passed over a small bridge.
After we had gone up quite a distance the train stopped next to other trains on a parallel track. These descending trains were waiting for all the ascending trains to get out of the way so they could finish their journey down the mountain. One was a regular red passenger train like ours.

yellow train at the passing zone

One was mostly open and looked to be some sort of service train intended for hauling supplies. The third was painted yellow, the only one we ever saw that color. Once the three of them left our group of 3 resumed travel up the mountain and didn’t stop again until they reached the top. 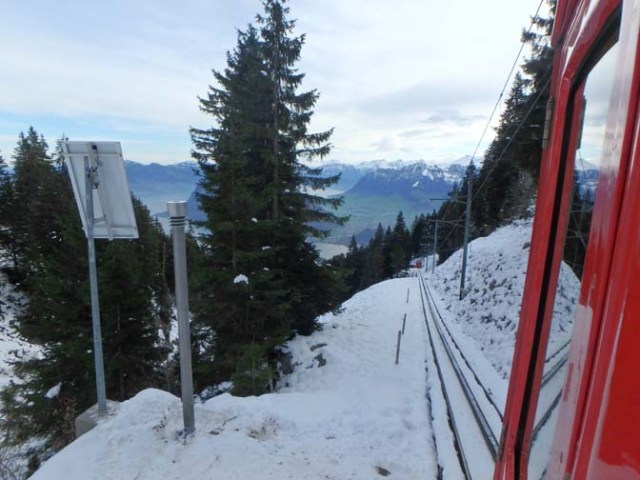 The snow got deeper as we progressed up the mountain.

icicles on a rock

Sometimes we passed so close to craggy rock formations that you could reach out and touch them if you wanted to risk losing an arm trying to do so. Others were more distant and some even had icicles.

at the top there’s a stairway where the train stops

The train stopped at the top in a room that was nothing but a stairway for getting out of the train. The stairs led up to a doorway and from there you could get to the rest of the things on the mountaintop.

buildings at the top of the mountain

At the top of the mountain there’s a gift shop, several places to eat, free restrooms, trails to several viewpoints, and the entrance to the aerial cableway. There’s also 2 hotels. The highest summit is Tomlishorn (2,128 m).

cogwheel trains at the passing spot

MyCruiseStories blog tells stories about adventures in cruising on ships big and small. Things to do onboard and in port. Anything connected to cruising. Also food, travel, recipes, towel animals, and the occasional random blog.
View all posts by LBcruiseshipblogger →
This entry was posted in Day Trips, Europe and tagged #MtPilatus, Alpnachstad, cogwheel train, Europe, lake cruise, Mt Pilatus, photos, Switzerland, travel. Bookmark the permalink.