Posted on September 27, 2019 by LBcruiseshipblogger

Royal Princess arrived in San Diego around 4am, though the scheduled arrival time was 7am. That gave the crew plenty of time to set up gangways on two different decks long before most of the passengers woke up. The morning started out foggy, but the day turned sunny by late morning as the fog burned off.

San Diego, California is the oldest permanent European settlement on the west coast with the first Spanish mission and fort established in 1769 – 7 years before the declaration of independence. The San Diego area was under Spanish rule until it became a part of Mexico when they gained independence from Spain in 1821. It joined the USA in 1846 during the Mexican-American war. The old town area originated where Spanish soldiers built their residences below the hill on which the first fort perched. In 1867 an enterprising merchant named Alonzo Horton purchased 800 acres that he developed into the new town and by 1872 he had gotten most of the population of old town to relocate. The original old town area is now a state historic park. 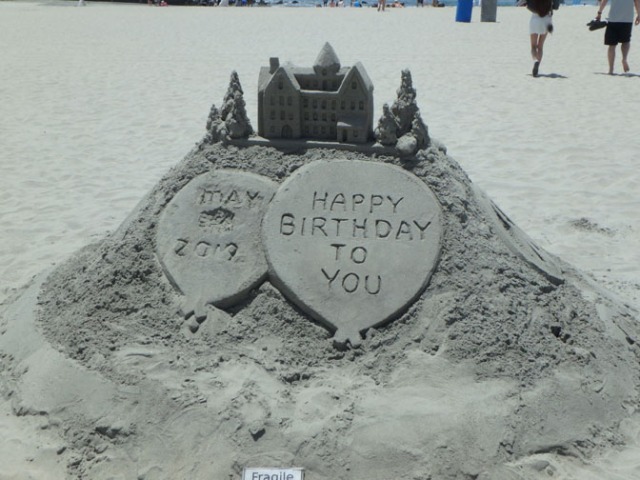 The cruise port in San Diego is in an area called the Embarcadero. Both cruise ship terminals sit near each other within the 2-mile waterfront strip that area consists of. There are quite a variety of things to do right off the ship. There was an aircraft carrier museum just a couple berths away from our ship as well as a nearby museum in an old sailing ship. A seaside path leads from there to a tourist spot called Seaport Villiage built by Disney in the 1980’s to represent a town on the sea of a century or so ago. There’s shops, restaurants, entertainment, and a marina there. 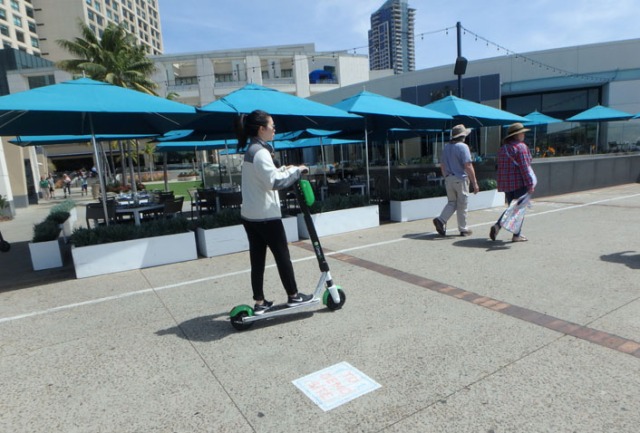 scooter rider on the waterfront walkway passing by the Seaport Village

Self-powered electric scooters of the sort people stand on are available for rent. They sit along the sidewalks sometimes in groups and sometimes where someone left a lonely one. They appeared quite popular as people of all shapes and sizes whizzed by on them. 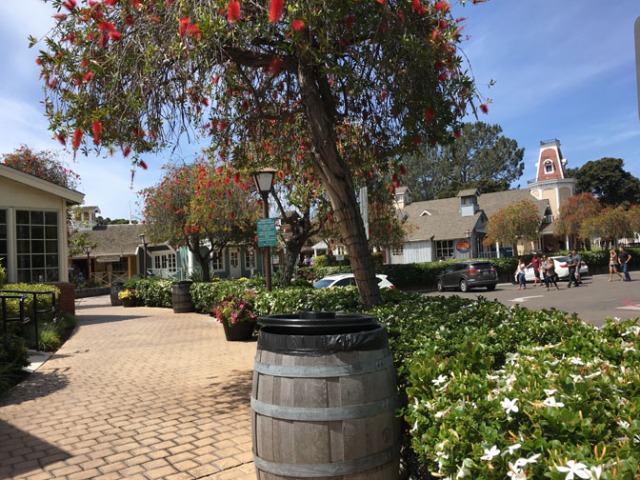 walkway in the Seaport Village

Also within walking distance of the port there’s a firehouse museum, children’s park and museum, and a train depot. Harbor cruises are available in the port area. Seal tours leave from the nearby Seaport Village. These amphibious vehicles are called Ducks in most cities, but San Diego is home to a base for navy seals as well as a navy base.

There’s a hop-on-hop-off trolley station right near the cruise pier, which makes for an easy and convenient way to get to the touristy areas of town. You can buy tickets for it at a booth by the trolley stop for less than purchasing them in advance on the ship.

San Diego’s biggest attractions besides sunshine and beaches are Balboa Park, the San Diego Zoo, and Coronado Island. San Diego also has a Sea World, numerous parks, theaters, museums, and of course plenty of places to eat and to shop. Other things to see in San Diego include a variety of historical monuments. There’s an oceanfront amusement park called Belmont Park in the Mission Beach area (which has nothing to do with the horse racing track of the same name in New York), and on the opposite end of the spectrum rugged coastline with trails to natural un-touristy beaches at Torrey Pines State Natural Reserve near La Jolla. 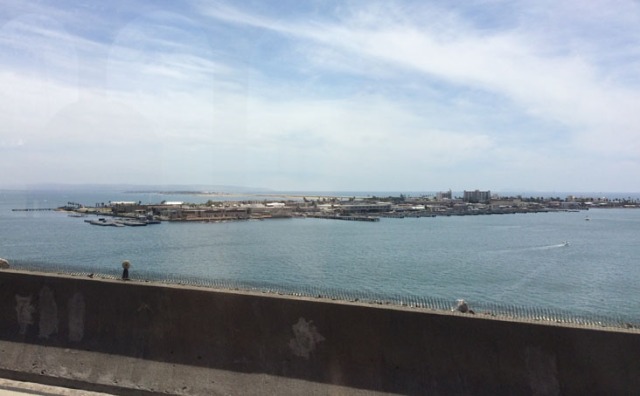 view of the navy base from the bridge to Coronado

Besides the usual attractions, San Diego also has a number of places where scenes from the movie Top Gun were filmed. The famous “Great Balls of Fire” bar scene was in a real and still existing place called Kansas City Barbecue. Banker’s Hill (West Laurel and Union Streets) of the chase scene, and a little house at 102 Pacific Street that was Charlie’s house (Kelly McGillis) in the movie are among the places most easily accessible to the public.

Overall there’s definitely more to do in San Diego than anyone could do within the time frame of a cruise ship port stop. There’s actually more to do just at Balboa Park alone than there is time enough to do it all in one day.

MyCruiseStories blog tells stories about adventures in cruising on ships big and small. Things to do onboard and in port. Anything connected to cruising. Also food, travel, recipes, towel animals, and the occasional random blog.
View all posts by LBcruiseshipblogger →
This entry was posted in Port Cities, Ports of Call, Princess, Royal Princess, USA and tagged cruise, photos, San Diego, San Diego cruise port, things to do in San Diego, travel. Bookmark the permalink.