How to Make a Towel Snowman

Posted on January 1, 2018 by LBcruiseshipblogger 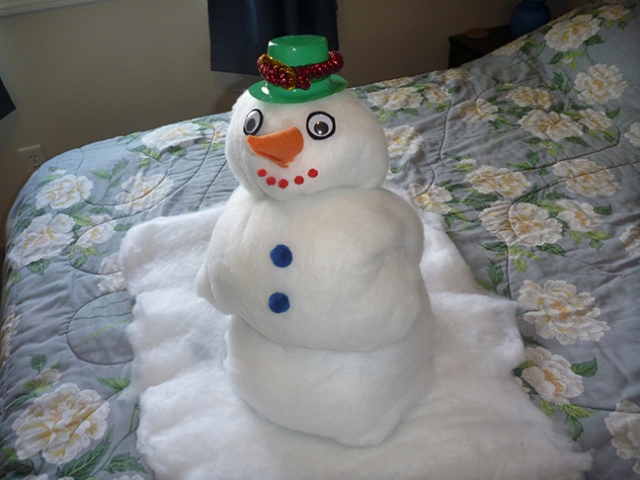 The towel snowman is easy in that you don’t have to make any precise folds or tight rolls. The challenging part is getting the “snowballs” to stack – and stay put. It’s OK if the snowballs aren’t perfectly round. In fact if the top and bottom are a bit flat it will help with stacking.

Directions for Making a Towel Snowman

roll a towel into a ball

To make the bottom snowball start by rolling one hand or bath towel into a ball. There’s no right or wrong way to do that. For me it worked out best to start with one corner and scrunch, roll, and ball the towel up from there. After the first towel is in a ball, wrap a bath towel around it, again scrunching, rolling, and folding the towel as needed to make it somewhat round. The inner towel can be any color, but it helps if the outer one is white. The snowman pictured started with a hand towel, which did not really make the bottom ball any bigger than the middle one made from just one towel so I’d recommend using 2 bath towels for the base.

After you finish rolling your snowball wrap a piece of the decorative cotton used as fake snow at Christmastime around it and cut to size.

For the middle snowball use just one bath towel, again scrunching and rolling it into a ball, then covering it with fake cotton snow.

Roll one hand towel into a ball and cover with fake cotton snow for the head.

Stack the “snowballs” just like stacking real ones – except these don’t squish into each other or stay on as easily as actual snow. Do whatever works to get them to stay stacked, whether that means careful placement or patting the top and/or bottom of some of the snowballs into a flatter shape. If desired spread out a piece of the fake cotton snow to put the snowman on so it looks like he’s out in the snow. 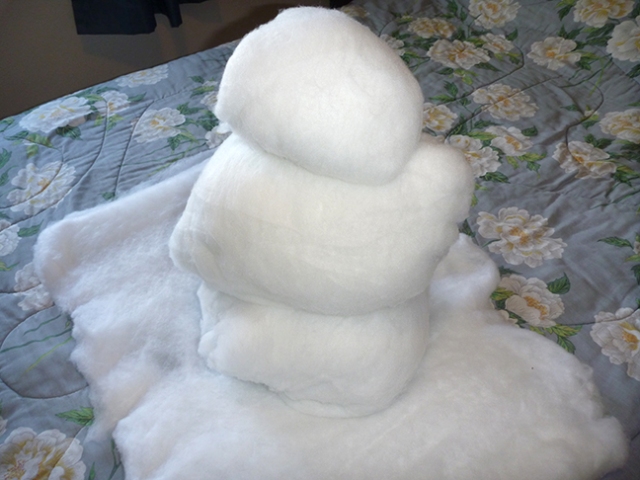 snowballs stacked and ready to decorate

Once the snowballs are stacked in place you can decorate as desired. My snowman’s eyes are googly eyes, which are taped onto black felt so they stand out more against the white of the snowman. Eyes could also be made from things like felt, paper, or pop-poms. For the nose I rolled a triangle of orange felt to resemble a carrot. Double stick tape holds the eyes and nose onto the snowman. His mouth is tiny red pom-poms, which stick to the cotton on their own without tape. The buttons are larger blue pom-poms.

This snowman’s hat is re-purposed from a hat bought at the dollar store for a towel leprechaun, decorated with red trim previously used for making a towel reindeer.

Sometimes people use sticks to make arms for real snowman. Pipe cleaners (aka fuzzy sticks or chenille stems) can be made into stick shapes and tucked into the sides of the middle snowball for the towel snowman’s arms.

MyCruiseStories blog tells stories about adventures in cruising on ships big and small. Things to do onboard and in port. Anything connected to cruising. Also food, travel, recipes, towel animals, and the occasional random blog.
View all posts by LBcruiseshipblogger →
This entry was posted in Towel Animals and tagged holiday towel animals, snowman, towel animals, towel art, towel creations, towel origami, winter decorations. Bookmark the permalink.

4 Responses to How to Make a Towel Snowman