Cruise Ship Cabins on Royal Caribbean Explorer of the Seas

Posted on December 29, 2017 by LBcruiseshipblogger

Explorer of the Seas in Hawaii

Royal Caribbean has all the regular room types you find on most large cruise ships – suites, balconies, ocean view, and inside. They also have some unique features on ships like Explorer of the Seas, which has inside cabins with virtual balconies and inside cabins with views of the Royal Promenade – an area inside the ship that resembles a city street. Besides the standard lower deck ocean view cabins there are also some upper deck cabins with panoramic ocean views with nearly the entire outer wall a window. Lower deck ocean view cabins have round windows. These may look like portholes, but actual portholes are smaller and have covers that can close them up during stormy weather. This ship has no true porthole cabins for passengers.

Suite categories vary from junior suites to grand suites, owner’s suites to two bedroom, two bathroom royal family suites to the biggest royal suite of all, which at 1188 square feet is bigger than my house. Suites vary in shape and size and while many are grouped together on deck 10, others can be found about the ship in other locations. 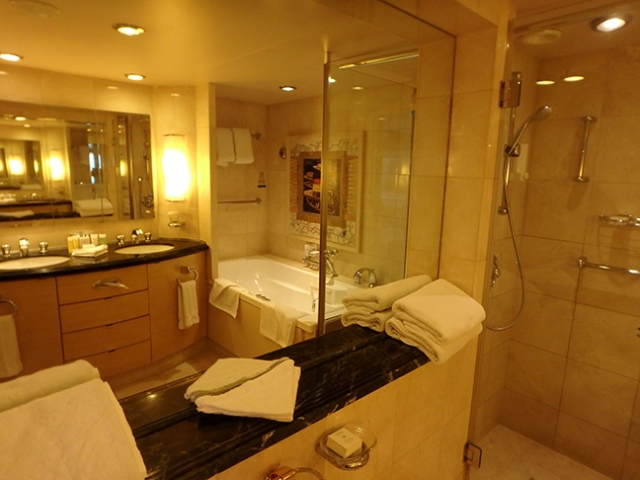 bathroom in the owner’s suite

Cabin numbering is a bit different on this ship than on ships we’ve sailed on previously. It has even numbers for outside cabins and odd numbers for inside cabins rather than even for port and odd for starboard. Decks 9 and below have the cabin number starting with the deck number, as is usual on most ships, but the cabin numbers on decks 10 and above give no indication of the deck where that cabin resides without looking at deck plans that say which numbers are located where.

Sometimes cruise ship passengers have a special occasion like a birthday or anniversary while onboard. They can arrange in advance to have the room decorated before they board, which is usually done as a surprise for someone in the room.

Accessible rooms are available in interior, oceanview, balcony, and junior suites. Besides having accessible features, these cabins tend to be larger than others in the same category.

Royal suites have over a thousand square feet with a separate bedroom and a balcony as big as the average stateroom. They sleep up to 4 people.

Royal family suites have less interior space, but even larger balconies. These suites sleep up to 8 people with 2 bedrooms, 2 bathrooms, 2 drop down bunks, and a sofa bed for 2.

Grand suites sleep up to 4 people with separate bedroom and living room areas. Both the room and the balcony are about double the size found in standard balcony staterooms.

Junior suites sleep up to 4 people and are about as big as a stateroom and a half. 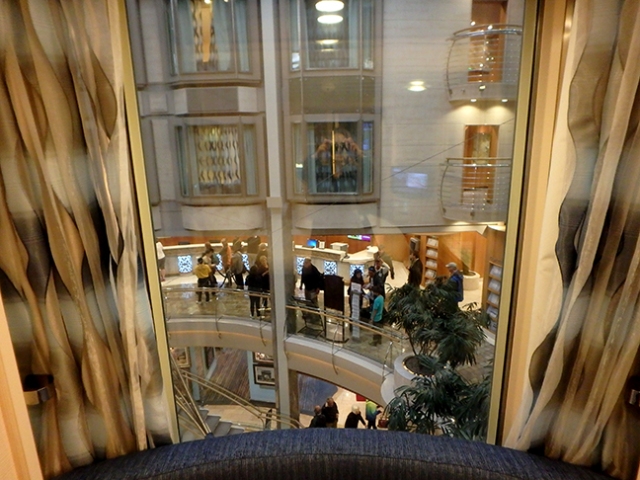 In addition to standard inside cabins, Explorer has some interior cabins with virtual balconies. It also has some with real windows and a view of the city-like promenade. The max guests for interior rooms is 4. Virtual balconies are a false window with a real-time video view.

inside cabin 6611 with promenade view

Our cabin had lots of storage space, which is typical of all the staterooms on this ship. The closet had pull-down extra racks and space for life jackets to sit on top of the closet so they weren’t taking up room inside. It had 2 sets of drawers and 2 side mirrors with shelves behind them at the desk area and 2 small cupboards above the TV. Each nightstand had a shelf and a drawer and there was a 3-shelf storage cabinet behind a side mirror in the bathroom. The refrigerator came empty so people could put what they wanted to in it. It did have an option to purchase mini-bar items, none alcoholic. 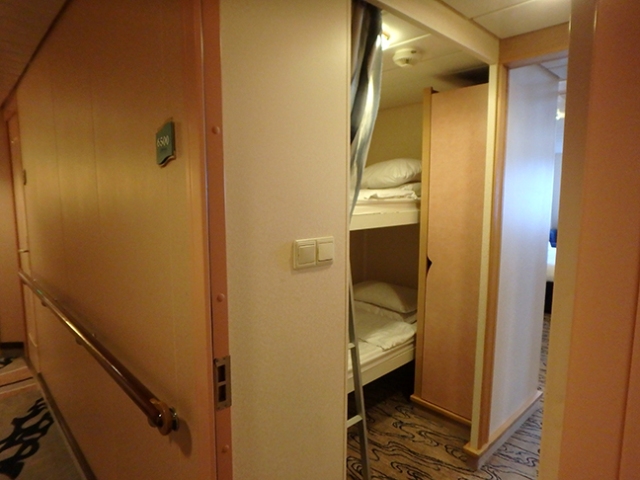 The room had two outlets in the desk area, which is one more than you find on some ships, but not enough for most people so it’s always a good idea to bring your own power strip. Walls are magnetic which is helpful for keeping paperwork organized if you bring magnets. The cabin doors are magnetic too which comes in useful for people who like to decorate them. 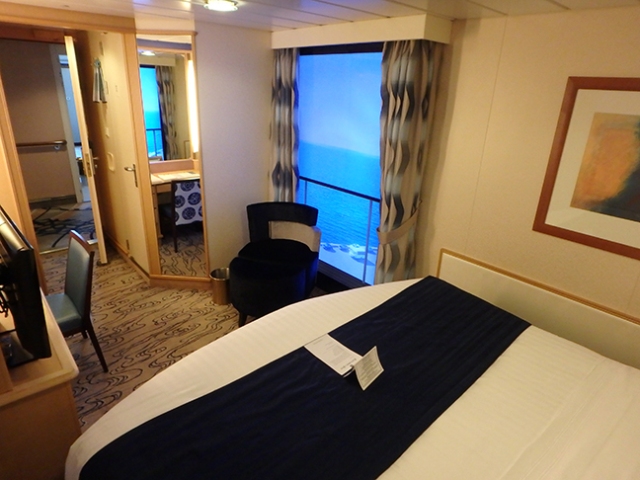 The bathroom had the smallest clothesline we’ve ever seen on a cruise ship in its little round shower. Bringing some sort of clothesline of your own comes in useful, especially since this ship has no guest laundries. Bathroom supplies provided included a dispenser in the shower with 2 in one shampoo/conditioner and tubes of shampoo, conditioner, body wash, and hand lotion. They also provided bars of soap. We enjoyed our time on Explorer of the Seas and would be happy to sail with Royal Caribbean again.

MyCruiseStories blog tells stories about adventures in cruising on ships big and small. Things to do onboard and in port. Anything connected to cruising. Also food, travel, recipes, towel animals, and the occasional random blog.
View all posts by LBcruiseshipblogger →
This entry was posted in Explorer of the Seas, Royal Caribbean and tagged cruise ship cabins, Explorer of the Seas, ocean view cabin, promenade view cabin, Royal Caribbean, Royal Caribbean stateroooms, Suites, virtual balcony cabin. Bookmark the permalink.