Posted on September 8, 2017 by LBcruiseshipblogger

The Naval Undersea Museum in Keyport, WA on the Kitsap Peninsula has quite a lot to see. You can’t beat the admission price – it’s free! The hours are a bit short, open just 10am to 4pm daily May to September and closed on Tuesday the rest of the year. Large exhibits sit outside the building around the parking lot. Even the museum building itself has an exhibit attached – the end bell from Sealab, an underwater habitat used for research on saturation diving in the 1960’s.

submarine sail from the USS Sturgeon

Other outside exhibits include the sail of submarine USS Sturgeon and Mystic which was one of two rescue vessels for submarine crews. Mystic or her sister ship Avalon could be transported by plane, truck, or ship for a rescue anywhere in the world. A crew of 3 could rescue 24 submariners at a time. Though they were on duty for about 30 years, neither was ever needed to perform an actual rescue. 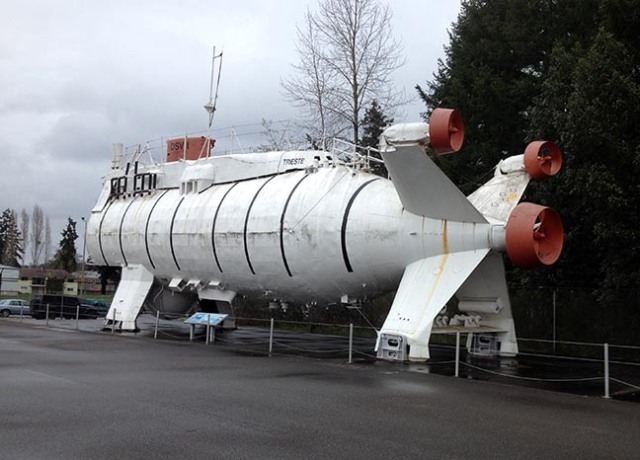 Trieste II bathyscaphe – mostly it’s a tank of lighter-than-water gas for buoyancy and ballast for sinking. The 2-man crew sits in the little ball hanging from the tank.

Triest II towers over Deep Quest on one side of the parking lot. Deep Quest launched in 1967 and remained in service until 1980. During that time it performed research for commercial activities as well as for the US Navy. It was equipped for and performed salvage operations as well as seafloor surveys and mapping, photography, and other deap sea research. Deep Quest holds the depth record for US built submersibles from a dive of 8,310 feet in 1968.

The original Triest set a record as the first manned vessel to reach the deepest part of the ocean in a part of the Marianas Trench called Challenger Deep. Triest II which sits outside the museum was operated by the Navy from 1964 to 1980. Her contributions included salvage operations on the submarine Thresher, whose loss in 1964 caused the navy to initiate submarine safety and rescue programs.

Inside the museum there are different sections each with a different theme for their displays. From the lobby you can enter into different exhibits. A man working there suggested starting with undersea history, which depicts man’s initiative and inventions through the ages for better and better ways of getting under the sea, deeper, and for longer periods of time from early diving methods to early submarines.

That chamber led into the temporary gallery, which told all about the loss of the submarine Thresher at a time when there was no ability to rescue a submarine crew, and how that loss led to the development of submarine safety, rescue programs and equipment. One other sub was lost before refurbishment to the new standards, but no others have been lost since the new regulations went into effect.

One area has exhibits about the ocean itself and the things that live within it. Other areas have things like torpedoes or diving equipment from helmets to ROV’s. The submarine room even has the interior of a control room from a submarine. 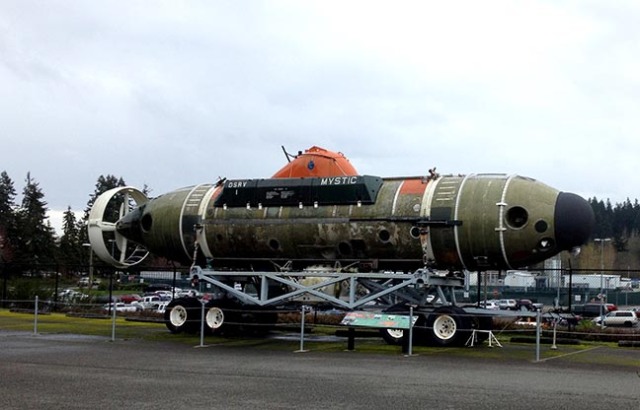 Keyport is about 11 miles from Bremerton, which is just a ferry ride away from Seattle.

MyCruiseStories blog tells stories about adventures in cruising on ships big and small. Things to do onboard and in port. Anything connected to cruising. Also food, travel, recipes, towel animals, and the occasional random blog.
View all posts by LBcruiseshipblogger →
This entry was posted in Randoms, USA, Washington and tagged dive, missiles, museum, navy, photos, submarines, things to do near Seattle, undersea. Bookmark the permalink.