Posted on September 2, 2016 by LBcruiseshipblogger

Guatemala is a Spanish-speaking Central American country with volcanoes, rain forests, and ancient Mayan sites. Their currency is the Guatemalan quetzal, but shops at the cruise port are quite happy to accept American dollars. Shopkeepers at the port speak at least enough English to make a transaction. They are also willing to bargain so you can usually buy things for less than the marked price. 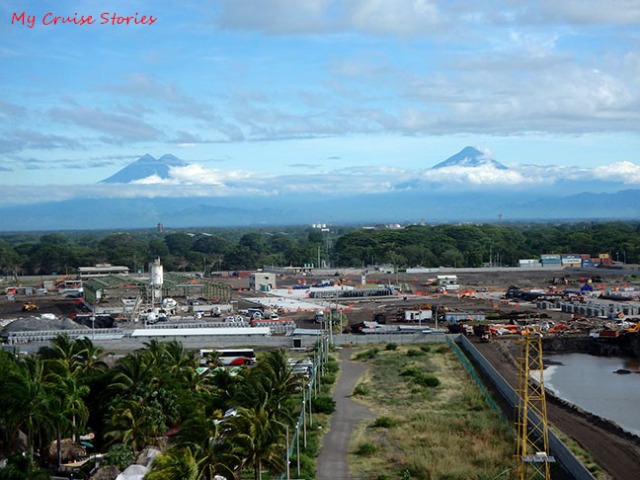 Volcanoes on the horizon

Taking a ship’s excursion or staying in the immediate port area is often recommended when visiting Guatemala as it is not currently one of the safest places on the planet. The ship offered several excursions, most to the capitol city of Antigua involving a 90-minute bus ride each way and a fair amount of dollars. Two volcanoes stood prominently on the horizon in the morning that Celebrity Infinity came into port, only to become obscured behind a fog of clouds as the day progressed. 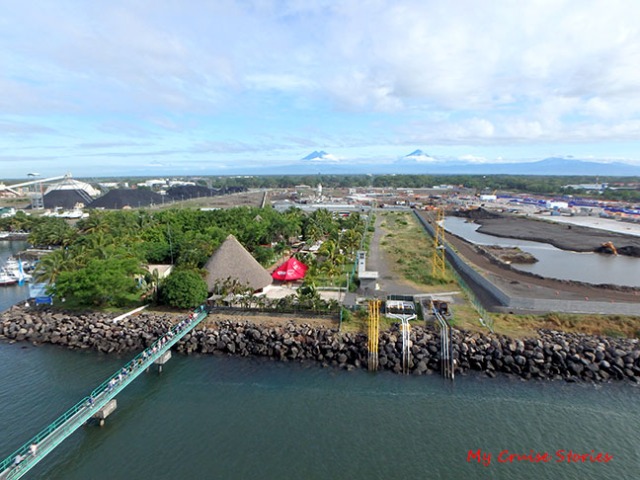 The cruise dock in Puerto Quetzal sits near an industrial area where container ships unload. From the deck of the ship we could see the parklike cruise port area sitting next to what appeared to be an active coal mine, with mountains of something black enough to be coal at a facility on the other side.

Not having booked an excursion, we opted to look around the port area in hopes of finding free internet and then enjoy some time on the uncrowded ship. The short walk down the dock from the ship leads to a small round building with a volcano shaped palapa top. Inside a marimba band played next to the tourist info booth which had a sign pronouncing that people could have their passports stamped free. Across the room another booth had a couple tour companies offering 5-hour van tours for about $45.

Just one open-air bar under a canvas roof offered wi-fi connections in the port area. Not free, but not too expensive at $5 per hour. Nobody else was there when we came and the internet was fast enough to open emails and things without taking too long. As more people came and logged on it got progressively slower so definitely better to go there when it’s not crowded.

Walking through the little jungle area of shopping booths we saw many palm trees with the bottom of the trunk painted white – which a local at a port in Mexico once told us was to keep the ants away. People had a good time posing with some Styrofoam statues next to the path. Booths everywhere sold local crafts, jade jewelry, t-shirts and other things tourists might buy. Several stalls had a woman or girl weaving more items to sell. 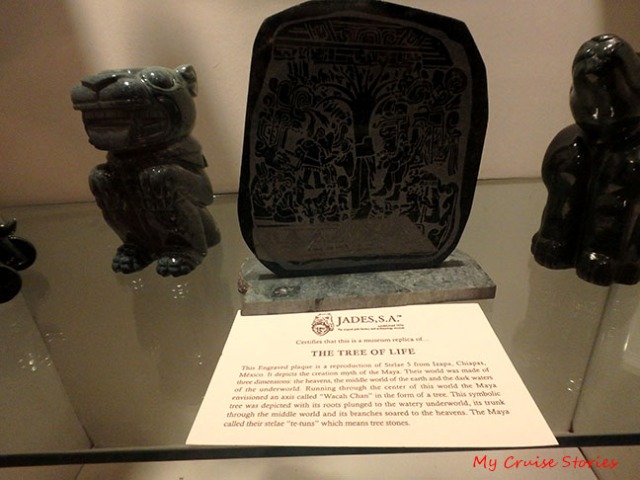 At about the center of the park-like pavilion a sign for a jade museum sat in front of a little round building. People can go in there and look at their exhibits for free. The museum had a number of jade items from the old Mayan civilization on display along with interesting facts like Mayans knew how to drill teeth centuries before Europeans, evidenced by skeletons with jade baubles adorning their teeth. 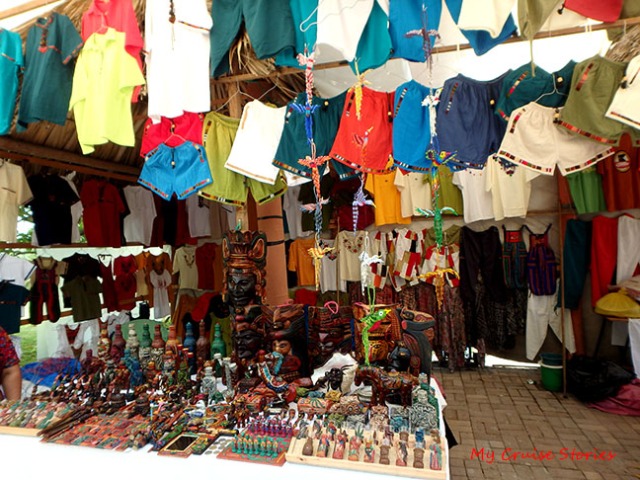 The little museum also had a video playing about a modern day search for the jade mines of the ancients. Eventually they found boulders in a farmer’s field containing jade that matched ancient artifacts so closely they could have come from the same boulder. Jade, it said, forms in areas of great pressure and in Guatemala is found along just one river where two of the earth’s tectonic plates meet. The museum also had a shop where the jade jewelry cost considerably more than in the little booths all around it. 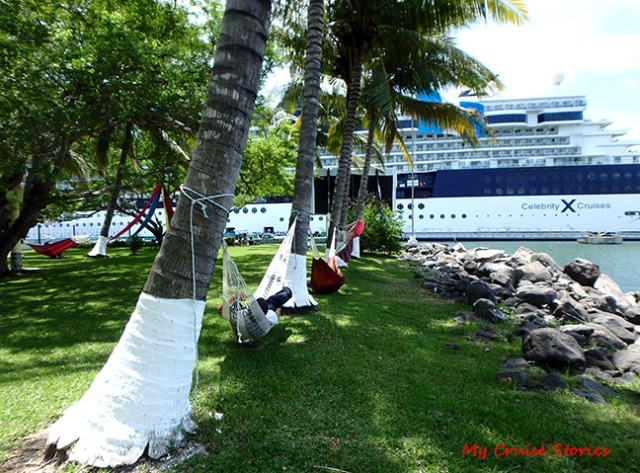 Near the water’s edge a row of hammocks tied to coconut trees beckoned passers-by to stop for a comfortable rest and a view of the ship. At the far end of the complex you can find taxis, but in addition to going out on your own not being recommended, they are also expensive. The 5-hour tour costs less than a private taxi.

MyCruiseStories blog tells stories about adventures in cruising on ships big and small. Things to do onboard and in port. Anything connected to cruising. Also food, travel, recipes, towel animals, and the occasional random blog.
View all posts by LBcruiseshipblogger →
This entry was posted in Celebrity, Infinity, Ports of Call, South and Central America and tagged cruise port, finding wi fi, Guatemala, Guatemala cruise port, jade, photos, travel. Bookmark the permalink.