Posted on June 23, 2015 by LBcruiseshipblogger

One morning on the Wilderness Adventurer from Un-Cruise Adventures started at anchor near Orcas Island in Washington State’s San Juan Islands.  Orcas is one of the few islands in the San Juan Island chain serviced by the Washington State Ferries.  After another fantastic breakfast people grouped up according to their chosen activity. Skiffs brought passengers to the dock near Rosario Resort where everyone hiked up a very long dock to a parking lot with vans waiting for the trip to Moran State Park.

We chose somewhere in between, the 4-mile lake hike. The trail circled around a beautiful green lake with some ups and downs in the terrain, but nothing like the steep incline of the uphill hike option. We heard frogs and woodpeckers and saw a number of trees and stumps riddled with woodpecker holes, but did not actually see any woodpeckers or frogs. I did see a spider scurrying across a single strand of web above the trail though.

They do their best to cling to a thin layer of dirt on a rock without getting blown over in a storm. Most of the trees consisted of cedar, spruce, or hemlock, but some areas had shore pines as well. Shore pines found clinging to the rocky edges of islands in the San Juans look small and often twisted, but the same tree in better growing conditions can become tall, straight, and as large as any other inland evergreen tree.

the trail took us under a fallen giant

Huckleberry bushes grew along the edges of the trails in some places. Wild Washington huckleberry bushes have little round leaves, and when in season, tiny red berries. Wild strawberry plants, Oregon grape, nettles, or other vegetation grew alongside other trails. Luckily ferns often grow near nettles which can come in quite handy as fern juice can ease nettle stings.

Nettles do have their uses. Some people harvest young nettle leaves to cook like spinach or to dry for making tea. Nettle tea is said to help lessen the affects of allergies to things like pollen. If you pick a nettle leaf with your fingerpads on the top and bottom of the leaf without touching the pointy sides you can harvest it without getting stung. As kids my sister and I tested that theory at summer camp where we picked many nettle leaves to scare the mean girls who mercilessly picked on one of the other girls at the camp. We never got stung. Fortunately we had no luck catching a wild mouse we found at the camp one day since it likely would have bitten somebody.

In some places along the hike we just saw forest, others revealed views of the lake. In one spot the lake water appeared almost luminescent emerald green. Unfortunately the camera did not catch the ethereal beauty of the scene.

big bridge on the trail

Along the way the trail crossed over a number of wooden bridges mainly over small forest streams. Bridges big and small all kept our feet dry as we passed above the water. A full loop around the trail brought us back to the van for the trip to the top of the mountain. 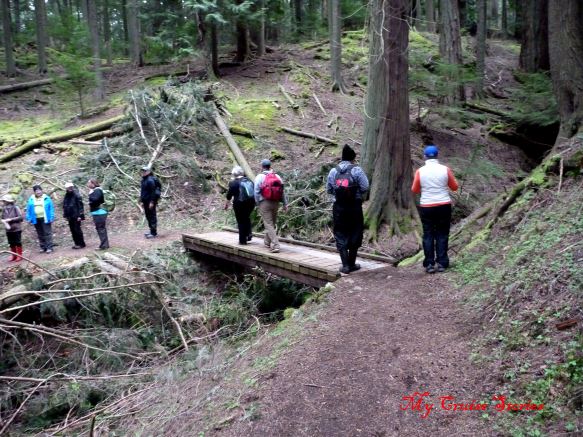 passengers crossing a small bridge on the trail

It was rather windy up there, but the summit had some impressive views of Puget Sound and nearby islands. A castle turret-like old stone tower gave us an opportunity to climb up even higher for views above all of the area’s trees.

stone tower on the top of Mount Constitution

Little rooms alongside the tower stairway gave the history of the life of Robert Moran, who donated the land for the park and paid for some of the roads and bridges running through it. His estate is now the privately run Rosario Resort where our skiffs landed.

inside the stone tower

Robert Moran had an interesting life.  He came to the frontier town of Seattle in 1875 at 18 years old, alone with no money.  He worked his way up from a steamboat worker to a shipbuilder, sending for his family along the way when he could afford it.  At 31 he served two terms as Seattle’s mayor, during which time the great Seattle fire destroyed much of the town.  He was instrumental in rebuilding it.  In 1905, just one year after completing the only battleship ever built in Washington, ill health sent him to Orcas Island in retirement, where he lived much longer than he would have dealing with the stress of his life in Seattle.

some passengers have a picnic with a view

We enjoyed a picnic lunch at the top of the mountain, which the ship’s crew had made for us before we left the ship that morning. The vans then brought us to the town of Eastsound at the end of the waterway called Eastsound to catch our skiffs as the ship had moved while we were away. It started to rain and the wind kicked up. We boarded the skiffs from a rocking dock and the skilled crew brought everyone safely back to the ship through the pounding waves. 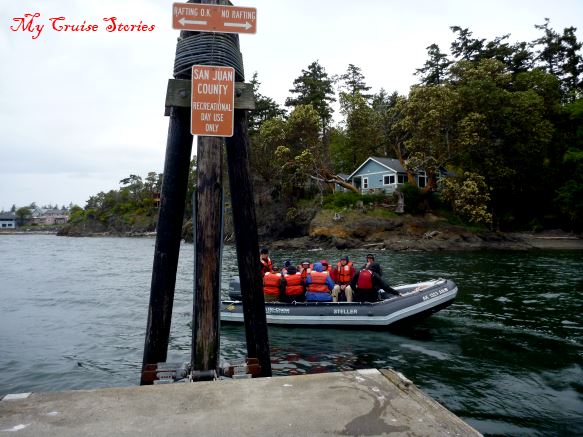 skiff picked up passengers at the public dock at Eastsound

After waiting out the weather a bit the captain gave the OK for anyone who wished to take a skiff back to Eastsound to explore if they should so desire, but nobody did. Instead of the scheduled brewery tour in Eastsound, people from the brewery roughed waves and weather to come to the ship bringing along beer for passengers to taste. On cruises you have to be flexible and sometimes it’s better to go with plan B – even if that plan was hastily made up on the spur of the moment.  It was a beer cruise so we had a lot of beer lovers onboard who appreciated and enjoyed the samplings from Island Hoppin Brewery.