Posted on September 2, 2014 by LBcruiseshipblogger

Outside of the Divina, of MSC  Cruises, we boarded a bus for our excursion to Hato Caves. Along the way the tour guide gave us a lesson in the history of Curacao (our local tour guide pronounced this Kure-uh-sow.) One of six Caribbean Islands that once belonged to Holland, then to the Netherlands Antilles, Curacao governs itself now. It retains ties enough with the Dutch as part of the Kingdom of the Netherlands that its citizens can travel to Europe without visas though they are not part of the European Union.  Curacao is the C of the ABC islands, (Lesser Antilles) which include Aruba and Bonaire as well as Curacao.  Aruba is also self-governed now, but Bonaire is a special municipality of the Netherlands.  These three islands lie outside of the Caribbean hurricane belt, making them safe to visit any time of year.

The Spainards first discovered Curacao in 1499, but as it lacked for gold or silver to mine or water for farming they did not have any large settlements there. The Dutch claimed it in 1634.  They used it as a place to obtain salt and a major slave-trading port.   A 100-year-old oil refinery remains in operation, providing jobs while it pollutes the island. Steps have been taken to modernize and reduce emissions, but in the meantime the refinery covers the cost of annual painting of a nearby building that once housed nuns and a catholic girl’s school and now functions as an old folks home. 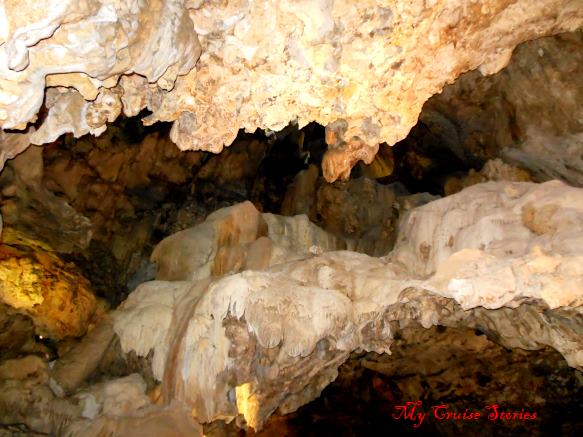 Hato Caves sits at the top of a hill, far from sea level. Because of its height it is a warm cave rather than cold like most caves. Fans placed throughout the cave provide cool air and ventilation for visitors.  The layers of the island of Curacao are called terraces.  Most of the island’s caves are found in the second terrace, but Hato Caves, the biggest and most visitor-friendly cave on the island, is uniquely located on the third and highest terrace. 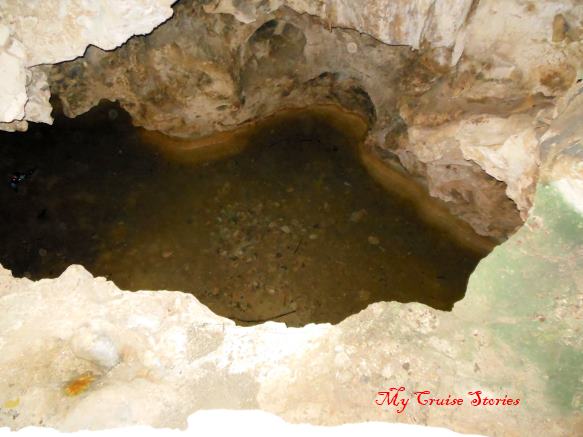 pool in the cave

Water seeps through the limestone rock of this porous cave, filling pools that remain year round, though the water level rises in the rainy season and recedes in dry times. No plants, animals, or algae of any kind live in the water so it stays clear and odorless. Visitors once threw many coins in the pools as they passed through, but in this increasingly cashless society just a few collect there now. Our cave guide joked about installing a debit card machine for wishing well use.

The tour bus stopped just outside the Hato Caves area.  A pathway through a gate brought us to buildings containing restrooms and a small shop.  More paths led uphill to the steep stairway to the cave entrance.  It’s hard to imagine how historic users reached the cave or navigated through it without the paths, stairs, lights, and fans that exist today.

pathway through the cave

The first chamber of the cave had a blackened look to the ceiling, the result of fires from users of a past era, who apparently kept their fires to that one chamber as it was the only area of the cave with fire blackened stone.  The Arawak people who once inhabited the island used the cave for shelter.  Later runaway slaves hid there.  Today small fruit bats call the cave home and sometimes dart about overhead or hang from the ceiling in groups. While we did see some bats, we did not see the cockroaches whom the guide said keep the cave floor clean of bat guano.

lighted path through the cave

Lights placed throughout the cave shine for visitors to see, and are turned off after they leave. In lighted areas green algae clings to the walls, where in the dark the algae remains black. Light of camera flashes can also contribute to turning the algae green, as well as blinding any bats that may happen by.

One chamber of the cave has a window through the ceiling and large rock formations on the floor that are neither stalactites nor stalagmites, but the remains of what once hung above, but fell a thousand years before. In this area of natural light from the ceiling, the algae on the walls grows green of its own accord, and the bats have a sort of back door to the outside.

tourists looking for a rock formation

Locals have given some of the cave’s rock formations names for things they remind them of like a donkey or the madonna and child.  The limestone in these caves originally came from coral formed under the sea eons ago.  As the water receded, the island was born and the coral turned to limestone.

While the walls of the cave remain in their natural state, and touching them is not allowed, the floor has been smoothed over into a flat pathway and railings added to keep guests within the allowed area. Some of the cave’s features show evidence of a more rapid advancement in the distant past, but currently the stalactites and stalagmites grow at an incredibly slow pace taking centuries to join together as columns.