Posted on November 3, 2012 by LBcruiseshipblogger 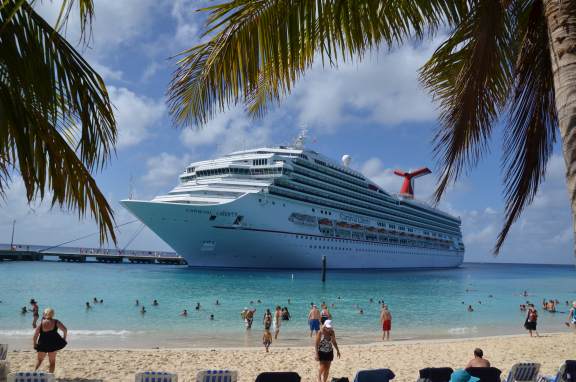 Sunshine sparkles on water in varying shades of blue on both sides of the dock.  Walking down the dock from the Carnival Liberty in Grand Turk takes almost no time.  The light blue of shallow water drops to the dark blue of deep just feet from the bow of the boat. 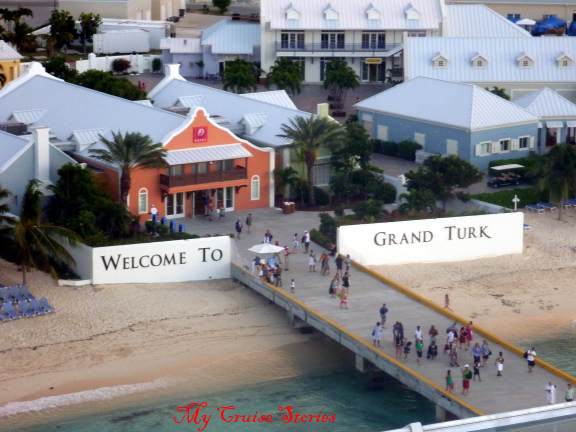 Typical of pretty much anywhere, the dock ends at a gift shop.  A stroll through the gift shop and out the other side brings guests into the usual cruise ship port full of shops, though this port seemed to have more.  Margaritaville has an expansive swimming pool, with swim-up bar included. 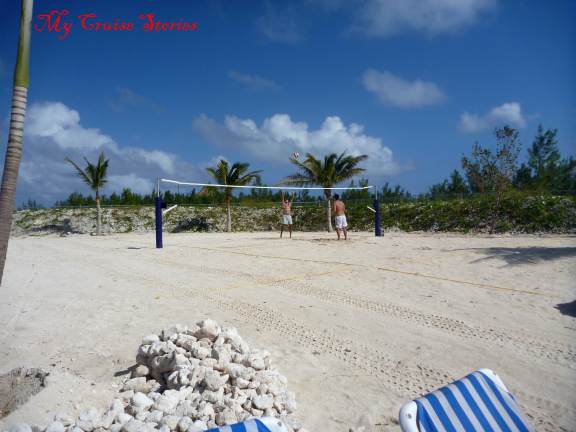 volleyball on the beach at Grand Turk

Heading toward the nearby point at the end of the island brings guests past rows of beach chairs, a volleyball net and game area, and a fence indicating the end of the cruise ship port.  We were told we would find good snorkeling off that point outside of the cruise ship land, but the current looked very strong and there was nobody around to see if anyone got in trouble so we chose not to risk entering the water there. 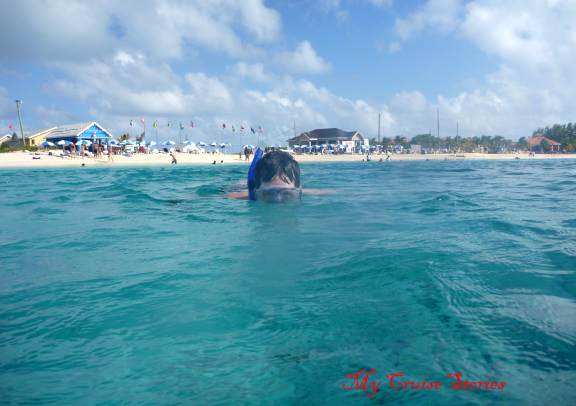 Going the opposite way down the beach, a sign indicates the boundary of the cruise ship port.  Beyond that different chairs line the beach, belonging to the local bars hoping to entice customers with free places to sit.  Some of the bars even offer free internet.  Local people sell trinkets in little booths of various island crafts.  At the far end of the beach, near the end of the roped off swimming area, underwater structure attracts fish to a small snorkeling area. 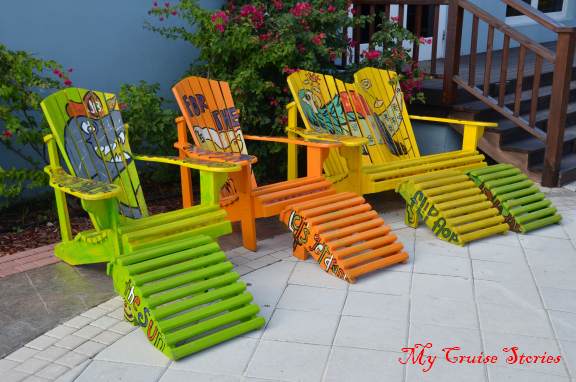 The cruise port has snorkel gear for rent, but anyone planning to snorkel much could buy their own online for the price of a couple rentals.  For a bit more, one can buy a set with a dry snorkel, which comes in quite handy for anyone who likes to dive under a bit, but doesn’t like blowing the water out of the snorkel afterward.  Snorkel socks are also a good thing for avid snorkelers to purchase in advance as they save toes from sores rubbed from frequent wearing of fins.  Be sure to clean the mask on a new snorkel set because the coating on it will cause fogging.  Buying some defogger is helpful too as that works much better than the old spit in the mask or dip it in the water methods of fog prevention.

The shallow bit of beach at the water’s edge quickly gives way to  somewhat deeper water.  Powerful breakers churn the coarse sand in a salty froth when the waves come crashing in.   Once past that rough first few feet at the water’s edge though, the water was pretty calm on our visit.  The ropes marking the outer edge of the swimming area ran right along the part where the water drops off deeper, putting the best snorkeling off limits. 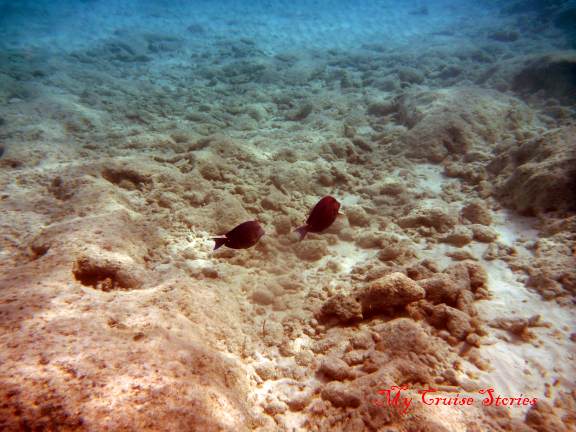 We’re not really the relax in a beach chair type, so we just used the conveniently placed beach chairs at the far end of the not-quite-in-the-cruise-port beach as a place to put our things and went snorkeling in the one area within the roped off swimming beach that had a bit of fish-attracting structure under the surface on the side of the ropes where we were allowed to swim.  We saw quite a few fish, a bit of coral, a shoe and a few cans.  The shoe may have washed out accidentally if someone left it too close to the surf, but there’s really no excuse for leaving litter on the beach where it can make its way out into the water. 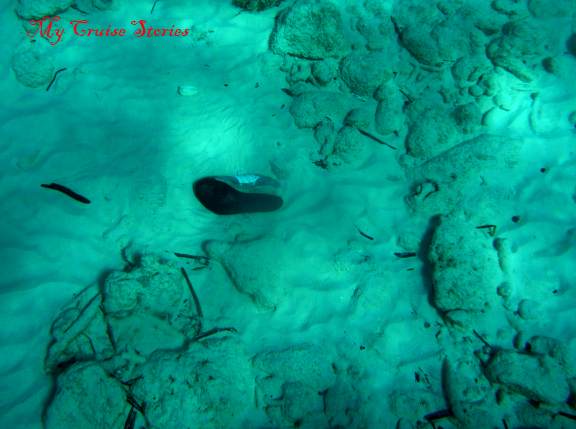 People who choose to stay within the boundaries of the cruise port area will also find plenty of chairs to sit on, but not so much to see under the water.  The cruise port has plenty of shops and a monument to John Glen whose space capsule landed near Grand Turk in 1962 following his historic first ever orbit of the earth.  A couple people sitting on the ground leaning against one of the shops with their laptops said they found a free internet connection there. 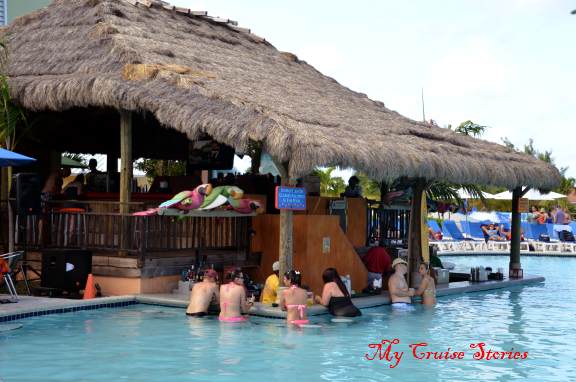 swim-up bar at Margaritaville with FlowRider in the background

Grand Turk offers a variety of shore excursions.  It has quite many different snorkel excursion choices including beach or reef snorkels, stingrays and even a bike and snorkel excursion.  There’s also power snorkeling, snuba, and of course, scuba diving.  Those who want to see the fish and coral without actually getting in the water can try the semi-sub or clear kayaks.

Other excursion choices bring passengers to pools or beaches.  Ride horseback on land and sea.  Take a tour on foot or by dune buggy, truck, trolley train, or segway.  Try the FlowRider located right in the cruise ship port.  Or go deep sea fishing.

A BRIEF HISTORY OF GRAND TURK

Like some other islands in the area, the Taino Indians were the first known inhabitants of Grand Turk.  As in many other places, once the Europeans arrived the original inhabitants died out due to foreign diseases they had no immunity to and slavery forced upon them by the Europeans.

Cockburn Town on Grand Turk claims its place in history as the reported place of Columbus’ first landing in the new world in 1492.

Island history includes pirates and a variety of countries laying claim to the islands until they finally ended up as an independent crown colony of the United Kingdom.  The Turks and Caicos Islands did not see as much action as some  Caribbean islands.  Turks and Caicos lay not only outside the major shipping path of old world sailors, but also outside of the Caribbean Sea itself, sitting in the Atlantic Ocean instead.  They had no gold or other treasures to interest the early Europeans. Bermudans came to the island and made their fortunes there through logging and salt mining.

The name Turks and Caicos may come from the Turk’s Head Cactus, which appears to wear a fez, and caicos meaning a string of islands.  Or it could have come from an old name for pirate dating back to the Ottoman Empire, where the Turkish ships dominated the Mediterranean, harassing European sailors, to whom Turks may have meant Pirate Islands. 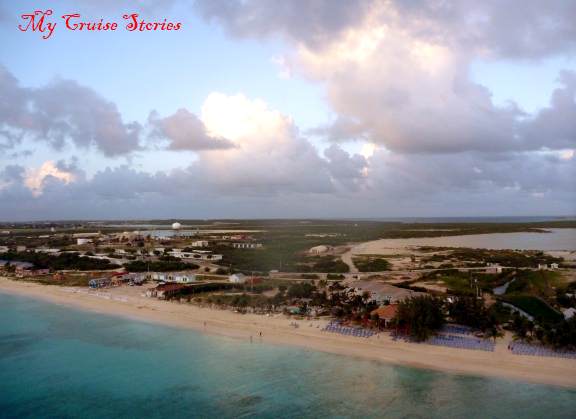 View of Grand Turk from the ship

At just over 6 miles long and a mile wide, Grand Turk is the largest island in the Turks and Caicos.  It and the other islands have miles of white sand beaches.  The average temperature ranges from 80 -95 degrees Fahrenheit.  Residents speak English and currency is the US dollar.

The Turks and Caicos Islands spread over 193 square miles of ocean, with the world’s third largest coral reef (after the largest,  Australia’s Great Barrier Reef and second largest, the Mesoamerican Barrier Reef extending from Cozumel to Honduras.)   Only 8 of the islands have human inhabitants.  The reef makes diving the main tourist attraction of the islands.  The reef is accessible for beach snorkeling.  Offshore divers visit a drop-off with a 7000 foot vertical wall.  People visit Grand Turk for fishing and sailing as well as for its excellent diving and snorkeling.

MyCruiseStories blog tells stories about adventures in cruising on ships big and small. Things to do onboard and in port. Anything connected to cruising. Also food, travel, recipes, towel animals, and the occasional random blog.
View all posts by LBcruiseshipblogger →
This entry was posted in Caribbean, Carnival, Liberty, Ports of Call and tagged Caribbean, cruise, Grand Turk, island, photos, pirate, port, travel, tropical island. Bookmark the permalink.