Swine Flu and the Voyage Home

Posted on September 8, 2012 by LBcruiseshipblogger 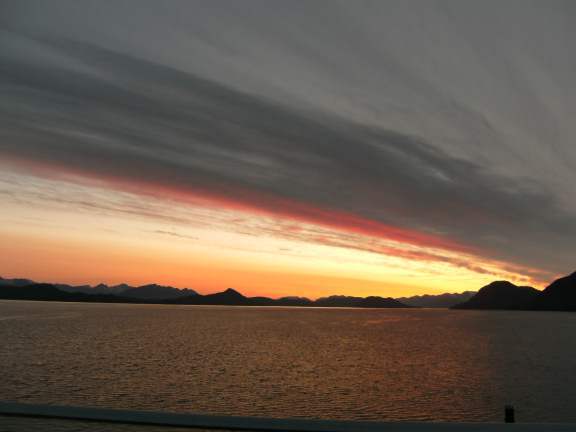 My son Chris, grandson Justin, and I took our cruise on the Norwegian Sun early in the Alaska cruising season in 2009, the year of the big swine flu epidemic.  At that time many of the ships on the Alaska run in the summer cruised Mexico throughout the winter.  Whether or not our particular ship had just come up from Mexico (where the swine flu outbreak started) or not, we were bound to run into people in port that came from ships freshly out of Mexican waters.

Despite my daughter’s warnings of quarantined ships not allowed to dock in Australia, we decided to take our cruise anyway.  The crew did everything under their power to stop the spread of germs.  They had people stationed at the entrance to every food venue armed with hand sanitizer who would not let passengers pass without a squirt.  Some crew members spent the whole day going up and down the stairways repeatedly cleaning the railings.  Anything passengers touched frequently was bound to get cleaned multiple times daily.

By the time we reached our last port in Skagway, Chris had started feeling a bit under the weather, though not enough to miss our train ride.  Shortly after, Justin and I did not feel well either.  Instead of enjoying all the ship has to offer on the voyage home, we mostly just stayed in our cabin.  Our dark little interior cabin, as we did not want to spend the extra money for one with a view.

Leela, Bender, and Fry from Futurama

I tried reading, but after reading the same paragraph several times and then realizing I had read the same page at least five times and still comprehended nothing, I gave up on that.  Chris had DVD’s with every episode of Futurama, and we probably watched all of them several times.

Every now and then either Chris or I managed to drag ourselves up to the buffet and gather a tray of soup and drinks for us all.  Although this flu did not include the upset stomach or emesis associated with the 24-hour flu, none of us much felt like eating, but we knew we had to at least try and stay hydrated.  At least Chris and I did.  We could hardly get Justin to take so much as a sip of water or spoonful of jello.

Once we even mustered up the energy to try and attend a towel animal folding lecture.  We did not get there early enough to get good seats and we couldn’t see much.  English definitely was not the presenter’s first language so we didn’t really understand what he said either.  I gave up early on and went back to the cabin to lie down.  Chris and Justin soon followed.  How to make towel animals remained a mystery to us at that time.

Other than the free cruise drawing from the tickets we got playing bingo, which I went to by myself and missed winning the cruise by one number, we spent the rest of the journey home in our room.

I don’t know if anyone else got sick on this cruise since we spent the majority of the last portion of it in our cabin.

The one adjustment I have made due to this is that I now get a flu shot every fall, at least 6 weeks before any scheduled cruise.  Not only have I not been sick on a cruise since, I also have not gotten sick from airplane flights or when many of my co-workers do.  Before that I had never gotten a flu shot, but having the swine flu once is one time too many so I try to make sure it won’t happen again.

MyCruiseStories blog tells stories about adventures in cruising on ships big and small. Things to do onboard and in port. Anything connected to cruising. Also food, travel, recipes, towel animals, and the occasional random blog.
View all posts by LBcruiseshipblogger →
This entry was posted in Alaska, Norwegian, Sun and tagged Alaska, cruise, futurama, sick, sick on a cruise, swine flu, travel. Bookmark the permalink.

11 Responses to Swine Flu and the Voyage Home