Discovering Shipboard Activities while Cruising on the Norwegian Sun

Posted on June 2, 2012 by LBcruiseshipblogger

Norwegian Sun docked in Vancouver BC

On my previous cruises at this point, I hadn’t really made use of all the ship had to offer.  Sure we had attended some shows, but that was about it as far as participating in the activities the ship has to offer goes.  My first cruise to the Bahamas was so short, and most of the time spent cruising was overnight so there wasn’t time to do much.  We did go to a show and Sheri tried singing Karaoke.   That pretty much filled all the time we had other than sleeping and a shore excursion.

The next two were the Card Player Cruises to Mexico, on the Spirit and the Oosterdam.  The poker room for the card player people gave us a full-time activity there for all time the ship spent at sea, so we didn’t investigate much the ship had to offer then either.

On the Reef Encounter, (except when the boat was in transit from reef to reef) we spent most of our time diving or snorkeling.  When on Australia’s Great Barrier Reef, the sea is pretty much where you want to be.

Finally on the Norwegian Sun with some sea days and nothing specific to occupy them, we started finding other things to do.  Justin was 6 at the time.  He loved the comedy shows, but not so much the production shows, even when they had one of Peter Pan.  I guess he is not into singing and dancing.  Unless of course he is the one doing the dancing.  We went to bingo early one day and they let him dance to his heart’s content on the empty stage until more people came and they needed to get the bingo game started.

Since this cruise happened not only before I started this blog, but also before I owned a digital camera, I have a limited supply of pictures supplied by Chris.  So in order to supplement things I don’t have photos for I’m borrowing an idea from my daughter Sheri at mommy adventures and drawing some cartoons (which I am not very good at, hers were much better. Unfortunately you can’t see them as her blog no longer exists and the name has been taken over by another website).

At each bingo game they had raffle tickets, giving out so many for each bingo card purchased.  On the last day of the cruise they had a drawing  for a free cruise from those tickets.  One day when Chris got to the line to buy the bingo cards at about the same time or slightly before another passenger on the ship, he did the polite thing and let her go first.  The raffle tickets are all in numerical order, so she had the set just before ours.  When drawing day came they had everyone stand up at the start and then sit as the tickets in your hand no longer matched the numbers called so far.  Near the end it got down to just her and me.  Then they called the last number.  These were the tickets from that particular game, and mine was one number too high.  Yup, had Chris not been so polite we’d have won a free cruise. 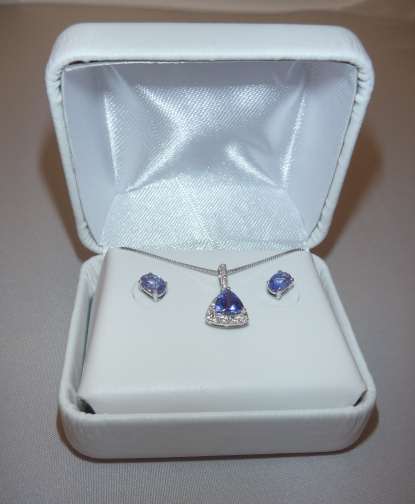 On this cruise we also discovered jewelry lectures where we first learned of the existence of tanzanite, alexandrite, and other sorts of rare stones.  Also how to get free things at port stops.  Interestingly enough, Justin seemed to like jewelry lectures, or at least did not get bored enough to misbehave.  One would think a small child would find a stage show more entertaining than a lecture, but apparently not, at least not this child.

my own creation – towel Yoda

We also tried attending the towel animal folding demonstration, but we didn’t get good seats so we really couldn’t see much, and the steward doing the demonstration didn’t speak English very well so we didn’t really understand a thing he said and gave up on it.  We remained clueless about how to fold cruise ship towel animals at that time, though I have since learned and now I even make up my own.

You never know what might entertain a 6-year-old.  On this cruise, one of Justin’s favorites turned out to be the hand sanitizer.  At the entrance to every food venue, in addition to a stand filled with hand sanitizer you could use on your own, they also had an employee stationed with a spray bottle of it to insure that each and every person got their hands sanitized before going in.  They took every precaution they could to keep people from getting sick since this was the year of the big swine flu epidemic, at about the time it had started migrating north from Mexico (where a lot of the boats going to Alaska at that time had just come from.)  Justin would get a spray of hand sanitizer from the person and then still use enough for about 10 giants from the sanitizer stand and enter the food venue with his little hands oozing and dripping with the stuff.  Sometimes he probably would have ran the stand dry if someone didn’t stop him.

Did I get enough?

Cruise ships have lots of stairways and this one had someone going up and down them all day cleaning the handrails to try and prevent passengers from spreading germs that way as well.  They did all they could to keep anyone from getting sick.

When mistakes make the best photos

Justin loves to pose for photos and although Chris and I are both totally unphotogenic we had fun posing anyway.  Most of the port stops had someone dressed as a moose or some such character for the kids to pose with. 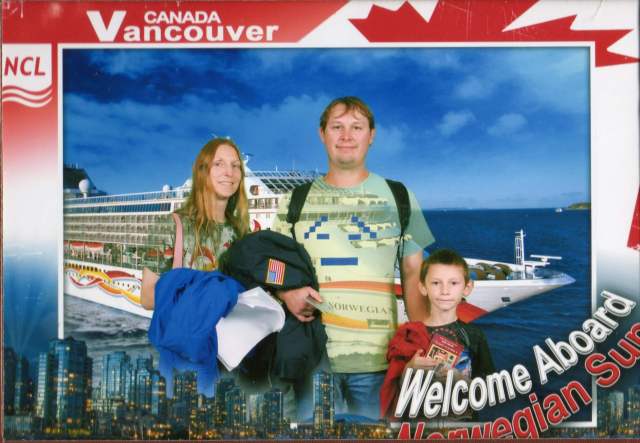 When we first boarded the ship they took the photo against a green screen and then added the ship in later.  Ours had the ship going through people where Chris and I had worn green shirts.  They offered to fix it, but Chris said then he wouldn’t want it.  He bought that one and liked it so much that we all wore green shirts for the initial boarding photo on our last cruise hoping to get a photo with a ship through us all, but it didn’t happen, we were just people in green shirts.

It worked for other people

Whenever Justin picked a Kid’s Club activity he thought he wanted to do, we would drop him off there early for the free play time when he could watch cartoons or play video games and then try and use the casino coupons the ship had given us while we had some kid-free time.  We never did get to use all the coupons…..more about Justin and Kid’s Club in a future blog.

There’s some activities I have yet to discover though.  Other than Sheri’s one crack at singing karaoke, we haven’t gone to compete in, or even watch, any of the various games or other competitive events ships offer for passengers to do.  I hadn’t really given this much thought until reading in Canadian Bald Guy’s blog about winning a ship on a stick at such an event.  Not that I need a ship on a stick or any other such bauble, but the events themselves could be fun.  (I’m currently in de-clutter the house mode, selling everything I think we don’t need on e-bay.)

Come to think of it, a couple teenagers passing us in the hall one day on our last cruise asked for a towel animal for a scavenger hunt, but as the ship charges for missing towels we declined going back to our cabin to get them one of ours.  Good thing they didn’t pass by early one morning when I was actually carrying a towel animal around to take photos for my Towel Animals Tour the Ship album on My Cruise Stories facebook page.  If they’d had a towel in hand and a couple minutes to spare I could have made them a snake.

We also spent some time on our Alaska cruise doing one of my favorite shipboard passtimes, exploring the ship.  The Sun had a lot more dead end passages and places where you had to go up, down, or around things to get through than any other ship I have ever been on.  It also had a lot more eateries scattered about the ship, though a number of them cost extra.  (Chris splurged for the sushi a couple times saying the $10 was well worth it.   Justin and I ate at the buffet those nights, as neither of us had any desire to eat raw fish.)

The Norwegian Sun had a small children’s waterslide which Justin eyed longingly.  The weather on  our trip was just too cold to let him use it.  We never used the pool either, as this ship did not have one of those sliding covers some ships have that make the pool area indoors.  It would have been a definite advantage on this trip.  We did use the hot tub some nights.  We’d make a run for it from the nearest door, drop our towels and jump in.  When done we got out as quickly as possible, slipped on the flip-flops while wrapping ourselves in towels, and made a beeline for the door back to the warmth of the inside.

Like all the major cruise ships, the Sun had some shops.  We didn’t make any large purchases, but we did find a few trinkets we liked.  Justin found a book about a  cruise ship named Peter who took an Alaskan voyage.  And I found a Norwegian Sun Christmas tree ornament.