Posted on May 26, 2012 by LBcruiseshipblogger 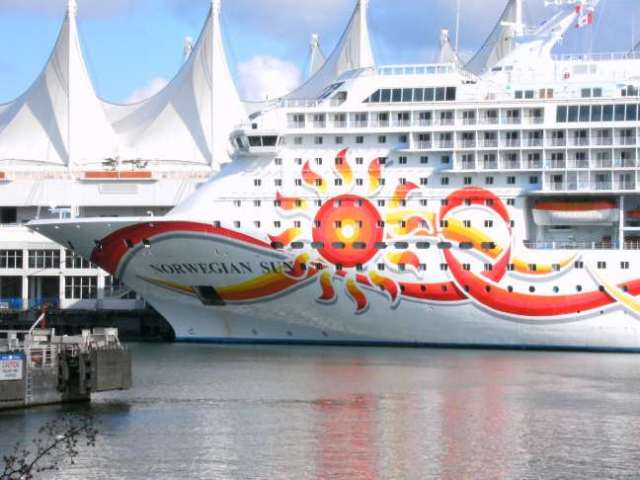 Norwegian Sun in Vancouver BC

Several years back, I decided I’d like to go to Alaska and see some glaciers before they all melt away.  Having been to Alaska quite a few times on fishing trips, my husband did not want to take a cruise there.  My son, on the other hand, also had never seen Alaska and decided to come with me.  We also brought his son, my grandson along.  This is the last cruise I took before starting this blog, and since Alaska cruise season starts about now, it seems like a good time to write about it.

As usual with us when booking a cruise, budget pretty much topped the priority list.  We also had to make sure our itinerary included Skagway because grandson Justin loves trains so we wanted to take the train ride there.  We found that most of the ships departing from Seattle did not have Skagway as one of their port stops, while the ones leaving out of Vancouver, British Columbia in Canada often did.  After searching the internet for the best possible price we could find, we booked through NCL on the Norwegian Sun, making sure to choose a cabin that slept three.

Due to budget constraints, we picked an inside cabin.  The taxes and port fees cost more than the room for the third person.  Our cabin had the usual two beds that could be pushed together as one if a couple booked the room, plus a couch that made into a bed for the third person.  We had our 3 little beds in a row, with a narrow aisle and a night stand on either side of the middle one.  The room had lots of closet and drawer space, and between the closets and the beds it had a fair sized square of floor that gave Justin enough room to play with his toys.

We made use of the bow cam channel on the TV as sort of an electronic window.  If we left it on at night with the sound off, the screen stayed dark enough throughout the night that you wouldn’t really know it was on, but when the sun rose and the screen once again had a picture we would know morning had arrived.

This was the only cruise I’ve ever taken where I really made good use of the gym.  I normally woke up long before the other two so I’d slip out and visit the gym, then return and have a shower before they even got out of their beds.  Now waking up early on a cruise means quiet time for writing blogs.

We booked this cruise months in advance of the departure date.  Our trip took place near the beginning of the Alaska cruise season.  Although we had heard that the weather in Alaska is normally better later in the summer, we had to go while Chris would be in the area.

But WE are NOT swine! 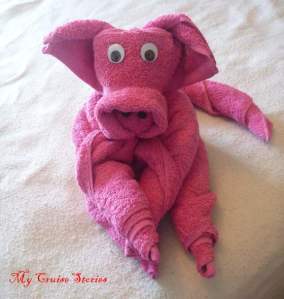 It was 2009, the year of the big swine flu epidemic that started in Mexico.  This was also before Mexico had so much unrest and at that time the majority of the ships doing the Alaska run in the summer went to Mexico in the winter.  So whether or not our particular ship came from Mexico, we were bound to run across people at port stops whose ships had come from there.

By the time the whole swine flu thing started we had long since booked our cruise and weren’t about to cancel it even when my daughter called from Australia begging us not to go.  She said they had a cruise ship full of sick passengers there quarantined out in the bay and not allowed to dock.  We told her we’d be fine.  We never have spent the extra for trip insurance, so cancelling wasn’t really an option even if we had wanted to, which we didn’t.  We’d looked forward to this trip far too long to let a little thing like a major swine flu epidemic get in our way.

Neither of us had GPS in our cars yet, so we set out for Vancouver in Chris’ car with a set of directions from Norwegian’s website, and a second set from mapquest.  We passed through customs without any difficulty, found Vancouver without any trouble, and set out through the city looking for the port.  Vancouver has all sorts of signs posted directing people to cruise ship ports, but they have more than one port so you have to know where you are going or the signs could lead you astray.  Having two sets of directions that did not always agree didn’t help either.

We found the ship without more than one or two u-turns from having gone the wrong way.  Someone working in the parking garage there told us where to pull up to unload our luggage.  Then he said we could either park in that garage, or for significantly less money go park in an outside lot a short distance away.  Of course we opted for the less expensive choice.  About the time we got our parking squared away, the shuttle to the ship left just before we could get on it.  The workers said the next one wouldn’t come by for another 15 minutes.

It seemed like a good idea at the time

“The ship’s right there,” we said to each other, looking at the ship about a city block or so away.  “We could walk to it in a lot less than 15 minutes.” 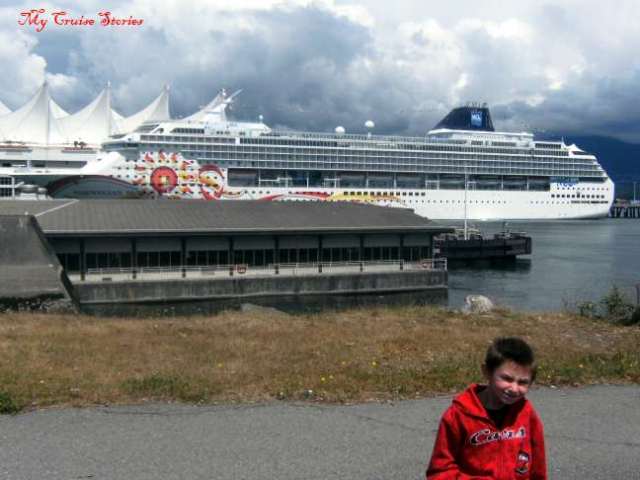 So Close and Yet So Far

Walk to it, yes.  It did not take long at all to reach the ship.  We could see people loading supplies onto the lower levels behind fences with locked gates.  What we did not see was any sort of access to the ship for passengers.  We finally ended up having to walk quite a distance past the ship to find an unlocked door into a place that looked something like a convention center where we could find a way up to a higher level.  Then we retraced our steps back toward the ship, only this time higher up.

The street we had started out on passed through a tunnel under another street on the level where we ended up.  We left that building and again saw the ship right there.  We could walk around 3 sides of it on docks where people could stand to wave goodbye to departing passengers.  What we could not do was actually get on the ship.

Eventually we found our way back into the parking garage, and from there finally did find where passengers go to get on the ship.  Of course the shuttle let the people off right there, and several of them had come and gone since the one we hadn’t bothered to wait for.  We did get on the ship in plenty of time before it left port though, and that’s what matters most.  Next time I’d wait for the shuttle.

Things to do in Vancouver B.C.

Vancouver has a lot to see for those who have a bit of time to spend there before or after the cruise.  It also has an international airport and hotels to fit any budget.  In addition to buses and taxis, public transportation includes the skytrains, which move about the city on elevated tracks except in the downtown area where they go underground.  In addition to the large BC Ferries that take people places like Vancouver Island, Vancouver B.C. also has small passenger ferries or aquabuses to take people to places like Granville Island, which has all sorts of things for tourists to see.

Shopaholics won’t want to miss the famous Robson Street, or some of Vancouver’s other many shopping areas.  Vancouver has a host of other things to do.  The many tourist attractions  include an aquarium, museums, space center, gardens, Science World, double decker or trolley bus tours and much more.  The famous Stanley Park, in itself could probably keep a family entertained for a week or more with everything from horse carriage or train rides to gardens, beaches, trails, and even a water park among its countless offerings.  History buffs might like Gastown, the oldest part of the city. 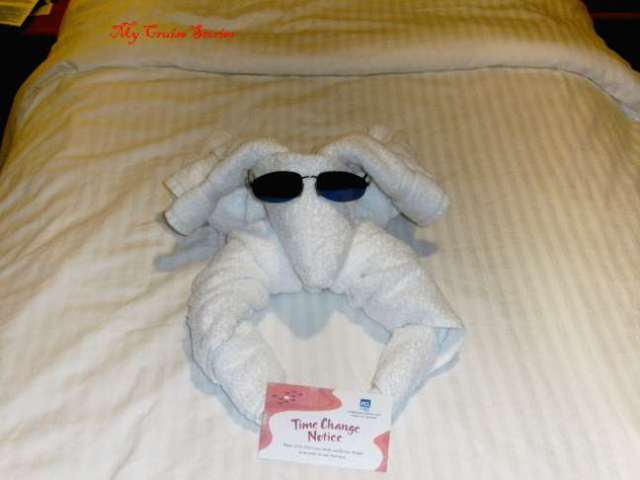 MyCruiseStories blog tells stories about adventures in cruising on ships big and small. Things to do onboard and in port. Anything connected to cruising. Also food, travel, recipes, towel animals, and the occasional random blog.
View all posts by LBcruiseshipblogger →
This entry was posted in Alaska, Canada, Norwegian, Port Cities, Sun and tagged Alaska, boarding a ship, cruise, cruise dock parking, funny, how to get on a cruise ship, lost in plain sight, travel, Vancouver. Bookmark the permalink.

7 Responses to Cruising to Alaska from Vancouver B.C. Canada