Posted on April 2, 2011 by LBcruiseshipblogger

Horse Ride at Half Moon Cay

Finally, the Holland America Westerdam made it to Half Moon Cay, Bahamas.  About 6 months before we booked this trip, I read in the Mariner Magazine (which Holland America sends to past guests) about the “sea” horses swimming on the ride at Half Moon Cay.  I wanted to take a Caribbean cruise anyway, and on Holland America specifically after I read that article.   I looked forward to the horse ride by land and sea more than anything else ever since we booked this cruise.  I couldn’t believe my luck when the cheap cruise we stumbled on just happened to be the one I most wanted to take.

Why, someone might wonder, would a person who has horses of their own want to pay good money to ride rental horses?  It’s all about the long warm ocean swim.  That Mariner Magazine article made it sound so wonderful.  I’ve had horses most of my life, but rarely had opportunities to swim them.  Never for long distances and only in cold water.

When my kids were young, we discovered a small lake several miles down a trail we could ride to from our house.  We rode a couple miles down the road to get to the trail.  Considering the distance, we didn’t go there often, but when we did we had a great time.  One side of the lake dropped off rather steeply, but the other had a nice gentle slope perfect for wading horses into the water.  As we reached the middle it was just deep enough to swim a few strides before their hooves touched bottom on the other side.  Then one summer we rode all the way there to find the lake surrounded in houses and completely inaccessible.

We didn’t get to swim our horses again until a 4-H trip to Nehalem Bay State Park on the Oregon Coast.  Most people carefully avoided the large potholes.  Easy to spot by their dark blue color, we all carefully rode around them until Maria, one of the 4-H girls, trotted her horse off the edge and splashed down in one.  Any other 4-H leader probably would have come unglued and scolded her mercilessly, but I thought it looked like fun.  So I tried it myself.  Everyone in our group tried it.  We dubbed it “cliff diving” and from then on it was our favorite thing to do whenever we went to Nehalem Bay. The water usually wasn’t quite deep enough for swimming in the potholes.  Once on an incoming tide my rather tall quarter horse, Taylor, splashed down into a hole deep enough he actually swam a few strides.

found a gently flowing sandy bottomed river to ride down.  Every now and then we hit a spot deep enough that the horses had to swim a few yards before touching bottom again.  Except Sera, my Arabian mare who could not swim.  She’d sink down under water and jump up for a breath of air.  So we sent her rider, Johanna, a 4-H member without a horse of her own, to the riverbank.  She had to follow on shore while the rest of us stayed in the water.

I haven’t had a chance to swim a horse since, and never in warm  water or for more than a few strides.  This long warm ocean swim at Half Moon Cay was to be the highlight of my cruise.  I anxiously looked forward to that moment.  We booked the first ride of the day within days of booking the cruise.  I did not want to run the risk of missing out because the ride filled up before we got signed up for it.

If you look up this ride on Holland America’s website, this is what they say about it:

Saddle up for the experience of a lifetime! After a short tram ride to the corral you’ll receive an orientation before setting out on a ride along winding trails up to the highest point on the island for a panoramic view of Half Moon Cay and the surrounding islands before you continue along the bay, back to the corral. Enjoy a refreshment as your horse is “dressed” for swimming in a special saddle pad and a rope halter (no saddle), then you’ll venture into the ocean for the sensation of riding a horse while it’s swimming! Ride the tram for the trip back to the Welcome Center.

We gathered on the stairs with all the other folks awaiting the first tender of the day.  They don’t have to take down any boats off the ship, the island has its own large tenders.  Our scheduled ride time came and went and finally we boarded the tender to Half Moon Cay.  We caught the tram out to the stable with the other passengers on our excursion.  Our small group included several people from Holland America who wanted to experience the excursion for themselves.

First we put our things in the cubbyholes provided near the bathrooms.  Then they 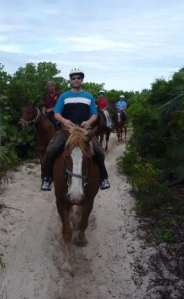 John on the trail ride

paired people up with horses the guides felt were a suitable mount for each person.  Once mounted, we rode around an arena to get used to the horse while the rest of the group mounted up.  Finally we set out for the trail.  We followed a nice sandy trail past the pastures of the stable area, where chickens ran free and goats grazed on a hillside.  As long as everyone stayed about 4 feet from the horse ahead of them and kept both hands on the reins all was well.  Stray a few inches one way or the other or try to lift a camera up to take a picture, and one of the many guides (who probably have far less riding experience than me) was sure to snap.

Riding English normally involves using both hands on the reins, but these horses wore western saddles.  People traditionally ride western one-handed.  After all, the cowboys need a free hand for their lasso, their gun, or to hold the leadrope to the first horse or mule in a pack string.  I’m not sure why they thought western riders should keep both hands on the reins at all times on a trail where the horses had nowhere to go other than straight ahead.

me taking a picture of the Westerdam

An instance of safety gone awry I think.  Luckily these are tame rental horses, because 4 feet is probably the least safe distance should one be inclined to kick.  Not that they would because rental strings don’t use kickers.  Up close a kick may land, but has no power, and farther away they can’t reach the next horse.  A horse length or about 6-7 feet is the true safe following distance.  Perhaps 4 feet is the distance they best keep the horses bunched together and following one another.   There really isn’t anywhere else for them to go with trees along both sides of the trail.  Maybe they are afraid the horses will stop and munch the foliage and inexperienced riders won’t get them to move again.

getting ready for the swim

I ignored their scoldings and took pictures anyway.  Why would they list a camera among the things to bring if they don’t want us to actually use it?  Once while taking a picture, my horse walked around the opposite side of a tree from where the others went.  Oh the horror!  Runaway horse out of control, the guides came unglued.  Honestly had I not had the camera up at that moment I would have purposely ridden on the other side of the tree from the rest just to do something different.  At one point one of the Holland America people snapped at the guide to shut up and let her relax and enjoy the ride.  This coming from someone who had never ridden before.  I hope she reported this to Holland America and that they have asked these guides to back off a bit so people can enjoy their ride.

riding in the water

pictures for me.  As if.  My brand-new camera that I just bought for this trip.  He wouldn’t have any idea what photos I wanted, nor did I have a clue if he was any sort of decent photographer at all.  Not that I’m a pro or anything, but at least they are my photos, not some random person’s.  Finally a different guide who realized by then that I actually did know how to ride told him to leave me alone.

Perhaps Holland America has had a chance to give these guides some training in customer relations by now if their people complained enough.  I certainly hope so.  Safety is important, but nobody did anything that warranted their constant correction and without it this would have been quite a pleasant trail ride.

After our loop around the trail we came back to the stable area.  Everyone dismounted and while we stripped down to our swimsuits the guides exchanged the saddled horses for a new batch wearing their bareback pads.  Before we mounted, they gave everyone a flotation device and instructed us to put them around our middles.  I’m not sure who makes up these safety rules, but I can state with certainty that I would far prefer to stay firmly put on a swimming horse’s back than to float up off of it while it swims. (Okay I was wrong about that. Years later when actually swimming with horses we saw what that float is used for, and floating off the horse is quite fun – see the video at the end of this post for a real horse swim.)

They got everyone mounted up, and in a line we trotted out into the ocean.  One person strayed slightly and immediately the lead guide snapped a leadrope on their horse and led them the rest of the way.  The water got deeper as we trotted.  Time for that long anticipated swim.  The line of trotting horses made a wide turn and headed back to the beach.  Wait a minute, where was the swim?  Their feet never left the ground.  I mentioned this to one of the guides.  With a surprised expression on his face that somebody realized they hadn’t swam when most people think they had, he said “They don’t swim.”

What? Where is this sensation of a horse swimming I was supposed to feel?  Shame

on you Holland America.  If they aren’t going to swim you should promote this as a ride in the sea, not a swim.  Honesty as they say, is always the best policy. If people get what they pay for you avoid bitter, bitter disappointment.  I went on this ride solely for the swim.  I looked forward to it for months.  Not the highlight of the cruise I expected, or even anywhere near.  Just an extremely huge letdown.  I would not have booked this excursion had I known they did not actually swim.

People who don’t know what swimming a horse feels like may enjoy this excursion, but you can’t fool someone who does.  I felt pretty much the way someone who bought a lottery ticket actually expecting to win would feel when they found out that they didn’t.

Several years later we finally got to swim with horses for real. On a trip to Montego Bay, Jamaica we set up a private excursion at Half Moon Equestrian Center. Though the name sounds similar, this is nowhere near Half Moon Cay, which is in the Bahamas. If you want to see what it looks like when a horse actually swims watch this video from Jamaica which even has some underwater footage.

Swimming with horses for real in Montego Bay, Jamaica