Westerdam, Before the Cruise

Posted on November 28, 2010 by LBcruiseshipblogger 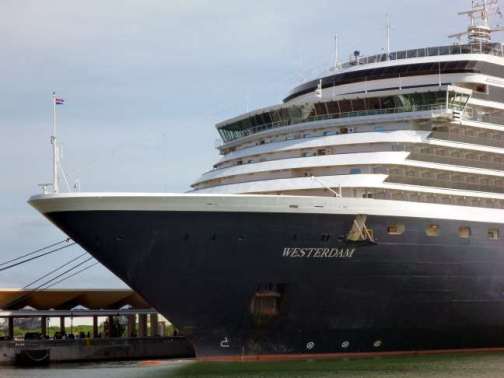 August, 2010. I finished my workweek and settled down at my computer. I had to check on any last minute adjustments to the scheduled time for meeting my sister and niece the next morning for our annual horse camping trip. There in my email inbox I found an email from John. He had left a couple days prior for a fishing trip in Alaska. A forward from SkyAuction.com. Book it, he said. Who can resist these prices? There it was, a 3 day sale on Caribbean cruises from Holland America, starting at $249 per person. I’ve wanted to do a Caribbean cruise for awhile, and on Holland America specifically ever since I read once in the Mariner Magazine they send to past guests that on Half Moon Cay, their private island, they have horseback riding that includes a swim in a warm ocean. I’ve taken my horses to a cold ocean, but there is not much swimming involved in that. They had five or six different cruise options. Eliminate everything that doesn’t stop at Half Moon Cay, and the ones over $400, and that left the Westerdam, Eastern Caribbean. I didn’t care where else it went or what boat it was, just give me Half Moon Cay.

What do you know, a new way to buy cheap cruises. And we do like things cheap, so I booked it. Or thought I did. The next morning I tried to leave for my camping trip. I got a phone call saying my credit card had been denied. How could that be? I had no balance on a card with a ridiculously high limit. So I had to delay leaving for my trip and investigate. Turned out that they had dropped the formerly sky-high limit to $1000. $20 less than the total price of the cruise once you add in the exorbitant fees and port taxes all cruises charge. (These taxes are the same regardless of the actual price paid for the room. For this trip, our taxes cost slightly more than the room.) They agreed to up the limit enough to pay for the cruise. After straightening out that mess, I was finally on my way for the camping trip.

The next week I applied for a new passport. One that expires in October just will not work for a cruise in November. I had to get that done in plenty of time to be sure I’d have it. I went to do the online cruise registration on Holland America’s website and did not get far before coming to the page that needed passport information. I remained stuck at that point until I got the new passport. While on Holland America’s website, I noticed they had us in the lowest possible room category. The drawback to booking this way, we did not get to choose our own room. I kind of figured we would go in whatever room doesn’t sell, but if we expect the worst than anything is an upgrade. Or perhaps we actually will have that room. I noticed only two in that category while glancing through the deck plans. The ones at the end of the hall closest to the showroom on the lowest deck with passenger rooms. Not the quiet sort of room I would choose, but conveniently located to get in and out of the shows quickly. There is less motion on the lower decks too. So far I have not had any motion sickness problems on cruise ships, but you never know. 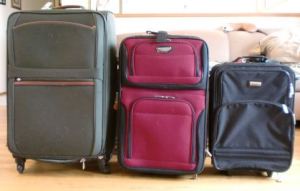 September 2010. We went on an American Safari Cruises / InnerSea Discoveries cruise to Alaska. I went to pack and remembered that I broke my big rolley bag last time I went to Australia. I have not needed it since so never replaced it. My small ones were too small, but John’s mondo bag that I borrowed for that trip is too big. I really needed to get a new bag before this cruise. I looked in the local stores, but they only had 5 piece sets. I just needed one bag. Perhaps I could find something online. 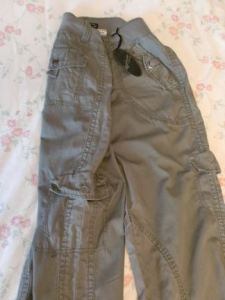 on the Alaska trip. (I did not find a swimsuit I liked, good thing I had an old one.) I found a new pair of cruise pants instead. What exactly are cruise pants? Anything with lots of secure pockets! Perfect for shore excursions. Who wants to carry a purse while dangling from a zip line or riding on a horse? Yet you can’t get on or off the boat without the ship’s card and there are often places to shop… Things like that are far too important for open pockets, hence the cruise pants with pockets that fasten securely. A good pair has enough room for a small camera, chapstick, a comb, all that sort of important stuff. I have no idea if said pants come anywhere close to being in style, but you know what? I don’t care! When you see grandmas, they never seem to wear anything remotely resembling the latest styles. Perhaps stylish grandmothers exist, but I have never seen one. So I always figured when I am a grandma, I no longer have to care. No kids around to embarrass by what I wear. Since I have

no contact with anything having to do with the latest fashions in my daily life anyway, I wouldn’t know hot from not if it bit me. Point being, I am a grandma, I can wear what I want and not care what anyone else thinks. So I bought the cruise pants. These even have strings at the bottom that draw the legs up shorter. Probably intended to convert them to capris, but for me drawn up at their shortest they almost don’t drag the ground. I will have to do something about all that excess string though.

The passport came, so I went back to Holland America’s online

check in. Got that done and moved on to the next page where they want flight info. Sigh, stuck again. We haven’t booked our flight yet. But while I was there I booked the horseback swimming shore excursion. That way we are sure to get it, I would be seriously disappointed if we waited to book until we got onboard and found out it was full.

I got my flu shot the other day. Cruise ships and airplanes have a lot of people packed into a small space. Nobody likes to get sick on vacation. Lots to do before a cruise.

October 2010. We finally got our flight booked. We’ll fly in the day of the cruise, and spend one night in Miami before flying home the day after. No more snags on the online registration, got that finished. Almost anyway, I just need to get more ink for my printer so I can print out the edocs and the luggage tags.  I found an affordable wheeled bag at overstock.com.  Cheap even.  Slightly bigger than I wanted, but not the embarrassingly large mega-bag I took last cruise, so it’s all good.

The new bag arrived, it’s not too big after all.  Its size seems just about right.  I also got an underwater camera.  Perfect for snorkeling.  I got a netbook of my own too.  Now I should have everything I need.  Well except a new swimsuit, but the old ones will work.

November 2010:  I still haven’t printed out those edocs yet.  Good thing I didn’t do it too soon though.  First the departure time changed, and then we got a room upgrade.  Seems I figured correctly that Skyauction cruise sales fill the rooms nobody picks. Nobody will complain about an upgrade, and just about everybody about a downgrade.  We got moved to a nice quiet deck with nothing but rooms above, below, and all around it. Still an inside room, but we can’t complain at the price we paid. Tomorrow I will put new ink in my printer and print out those edocs.  I finally used up the last of the little bit of ink it had left.

We found someone to look after our animals and someone to take us to the airport.  We even had somebody to pick us up in Fort Lauderdale.  Nothing left to do but go on a cruise!

MyCruiseStories blog tells stories about adventures in cruising on ships big and small. Things to do onboard and in port. Anything connected to cruising. Also food, travel, recipes, towel animals, and the occasional random blog.
View all posts by LBcruiseshipblogger →
This entry was posted in Holland America and tagged Caribbean, cheap cruises, Holland America. Bookmark the permalink.

3 Responses to Westerdam, Before the Cruise