Posted on October 9, 2010 by LBcruiseshipblogger

Day five: Another day of Alaskan cloud failure (or what the rest of us call sunshine.) The crew of the Safari Quest had the anchor up and the boat underway before breakfast, which included the best muffins ever, coconut lime. These warm, fresh from the oven homemade muffins tasted so good they were one of the highlights of the cruise.

Icebergs Up Close in LeConte Fjord

Following breakfast, we boarded the skiffs for a tour of LeConte Fjord, included on the InnerSea Discoveries Eastern Coves itinerary. We passed towering icebergs grounded on the terminal moraine of LeConte glacier. The face of the glacier itself lay 11 miles distant down the winding windy fjord in waters teeming with icebergs and bergy bits, so we stayed near the entrance of the fjord getting up close and personal with the ice bergs there. The other group ventured farther into the fjord, but cold wind and clusters of icebergs blocked them from progressing very far.

All the nearby icebergs looked white, while some in the distance glowed with a beautiful blue iridescence. Pursuit of the blue icebergs seemed as futile as finding white ice on Baird Glacier. The deep blue ones always stayed distant. Once we got close they were all white, or at best light blue. The color is all about the purity and density of the ice and the way light refracts from it, so getting close changes how we see the light in the berg and thus the color we perceive.

My favorite berg had several caves. One cave tunneled all the way to the other side. We could look through it and see water lapping against the far edge. Some icebergs had large overhangs clinging precariously overhead. One had a big boulder of ice that seemed to sit unattached on top of it. Popcorn-like crackles broke the silent stillness as air pockets burst in the melting ice. Kevin broke a bit off a passing iceberg and handed it around so we all had a chilly taste of glacial ice, water in its purest form. After close examination of a big berg with a large overhang, we moved down the way 100 yards or so. Kevin stopped the skiff, opened his backpack and began to pull out mugs. He filled them with steamy hot chocolate and offered to add peppermint schnapps. Everyone had just started sipping cocoa so rich it tasted almost like drinking a candy bar when all of the sudden we heard a loud crack and a crashing splash.

“That was the overhang we were just looking at,” Kevin said.

Sure enough on the way back the overhang had vanished and new bergy bits appeared floating next to that berg as if by magic. Heading back to the yacht, I sat near the bow and (as if I couldn’t see this for myself) John called out “Watch out Lois we are heading straight for an iceberg!”

Noticing he gave no warning to Pokin, who sat a hair closer to the front than me, but apparently could see said looming iceberg for herself, I replied “I don’t know, I was going to stand up and do the Titanic thing.”

“When Kate Winslet sailed with us she actually did stand up in the bow and spread her arms and even sang the same song she sang in the movie,” Kevin interjected.

Back at the ship, they served us BLT&C (bacon, lettuce, tomato & chicken) sandwiches and soup for lunch while the boat got underway and headed for Ideal Cove. I had to pull the tomato slices out of mine though, anything more than little diced pieces is just way too much tomato for me.

Once we anchored up in Ideal Cove, almost everyone set out for a hike. John decided to go kayak fishing by himself instead. In the skiff, on the way to the trail Kevin mentioned that some of the crew had come up with Indian type nicknames for themselves, and he needed one.

Boardwalk through the Muskeg

“How about High on Nature,” I suggested. I thought it fit because he’s the only one I’ve ever met who could get so excited about the underside of a blueberry bush or the pattern of water on mud. And I thought I was easily amused. I did not get the feeling he wanted to use it though.

“It sure is beautiful out here,” someone said. “I’ll be sad to have to go back to the real world.”

“Mirage,” I said. “Isn’t that a hotel in Vegas?” Followed by silence. Wrong thing to say I guess. Las Vegas is so far removed from wild remote Alaska it could be on another planet.

After a fairly short hike on a forest service boardwalk trail, with much stopping for various people to take photos, we came to a bridge with a view of a beaver dam where the Ideal Cove Trail hooked up with the Three Lakes Trail. The short hike group decided that this would be the place to turn back. I wanted a longer hike than that, so with a bit of apprehension that the long hike may turn out to be too long, I set off with the rest. We hiked through the muskeg, or Alaskan peat bogs, where we saw natural bonsai trees, dwarfed by their living conditions in the peat bog rather than human manipulation. A crow loudly scolded us from the top of a grove of tall trees. We didn’t need a translator to know that his cawing meant get out of my forest you trespassers.

“How do you suppose they got the boards here to make this trail?” Someone asked, followed by much speculation.

“It would be a lot of work to pack all these boards in.” 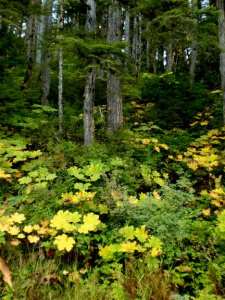 “Maybe they dropped them by helicopter.”

However the boards got there, it is amazing that someone built boardwalk trails in the middle of nowhere. They must get some maintenance as well, or there would be a lot more broken and submerged boards than there are. Through the peat bogs, there are places where some will have boards 2 to 3 high and others do not. A few either have a bit of water running across or squish down into the bog when stepped on and get water over the top. Probably the next candidates for stacking one board higher. Some boards even have fish net stapled over them for traction. 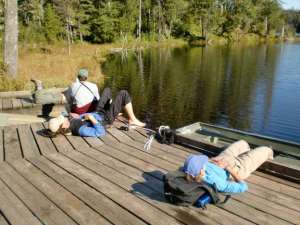 Sleeping on the dock

After awhile we came upon a dock in a lake. The dock had a picnic table, with a small pair of socks on it and a blue t-shirt underneath. A rowboat with one oar sat in the water, tied to the dock. It seemed like a good place for a rest, so everyone sat down either at the table or on the dock. Those on the dock soon lay down for a nap. We lay quietly in the silent stillness of the place until Nellie woke up to the buzzing sound of dragonfly porn taking place on her leg. I had tried earlier to take a picture of a dragonfly, but it left whenever I turned the camera on, only to return as soon as I turned it off. By this time I had given up on dragonfly photos and joined the nappers, but with all the good flat spots already taken I found a comfortable board on the part slanted to the water’s edge like a boat 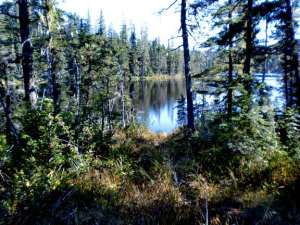 launch. This did puzzle me a bit as any boat light enough to be carried a considerable distance down a narrow winding board trail with many ups and downs could probably just be dropped straight off the dock into the water.

We hiked awhile longer until the trail ended on a logging road. After hiking up the road a bit, we came to another trail and back into the woods we went. I noticed that even when I did not stop to take pictures there seemed to always be an ever-widening gap between me and whoever was ahead of me. Any looking around widened the gap further. Beats me how they can go that fast on a narrow boardwalk and see anything at all other than the boards under their feet.

Bridge at the Beaver Dam

Eventually we came to the beaver dam and the bridge, and back to the beach. Kevin called the boat for a skiff to come pick us up. A voice on the radio said that John went out alone in the kayak and they had heard him blow a whistle. They sent the skiff to investigate. I don’t think the others heard because they seemed a bit surprised when the skiff did not come our way.  The radio mentioned the whistle blowing for a second time. I hoped nothing bad had happened. After a few minutes of needless worry, the skiff reached him and the radio said he had caught a fish. The other skiff set out in his direction and somebody mumbled something about how many skiffs does it take for a fish. I thought he would surely be Mr. Unpopular that night as people complained about the wait cutting into hot tub and cocktail time. It turned out the first skiff left with no supplies and he needed a float to bring his monster fish in.

Finally one skiff came our way. John’s skiff got to the boat first (it must have towed the

kayak as he was there as well.) All grumblings were forgotten as people who had never seen a halibut before marveled over his 60-pound fish, caught on a 3 1/2 oz pearl green Point Wilson dart. Dinner that night was already in the works, so we had halibut tacos for lunch the next day with plenty left over for another meal.

Anchors away and off toward Wrangle. As we passed near Petersberg during dinner, many people abandoned their king crab for their ipads and internet phones and that all-important internet access.

We hadn’t seen many other boats before, but there they passed quite frequently. We had fun playing “What’s that Cruise Ship.” One member of our party could identify them all, even the state ferry.

InnerSea Discoveries and American Safari cruises are now both under the name Un-Cruise Adventures.