Posted on November 19, 2021 by LBcruiseshipblogger

Symphony of the Seas

After having been shut down for a year or so due to covid, the cruise ship industry has to take precautions to prevent outbreaks on ships from shutting them down again. Because of this, the boarding process has gotten harder, starting from before you even go to the dock.

Vaccines are required for some cruises, which is definitely a good idea when you want to prevent outbreaks of disease. Although the governor of Florida seems determined to insure everyone in his state has every possible opportunity to get sick and that businesses and other public places are unable to protect their employees or anyone else, because ships visit countries with more sense some cruises departing from there can require vaccines anyway. After all there’s no point to setting out on a cruise if you aren’t allowed to dock at the scheduled ports because of unvaccinated passengers. 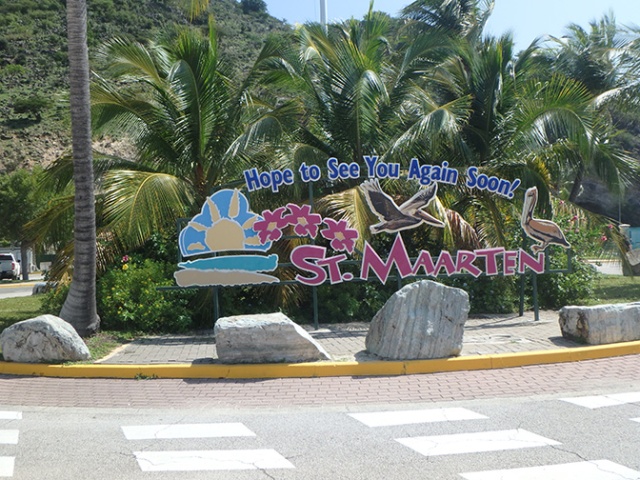 Two of the 3 ports scheduled for our cruise on Symphony of the Seas required vaccinations, as they don’t want a bunch of covid infected tourists bringing new outbreaks of the pandemic to their islands. Proof of vaccine wasn’t the only pre-boarding requirement though. It was actually one of the easier ones. Pre-registering online has been a thing with cruises for ages, so adding vaccine info to their app is just an extension of that. It even allows phones to take photos of the vaccine card right as you are filling in the info.

The hard one is the requirement of a covid test. Testing stations  in some places are inundated with unvaccinated people who require proof of a negative covid test to go just about anywhere indoors so rapid tests may only be available to those showing symptoms. This was further hampered by the requirement of the test being no more than 2 days ahead of time for a Saturday departure and results taking several business days to arrive. Results of course must be presented at boarding so if you haven’t got them yet you don’t get on the ship. Limited testing at the dock was offered for people who ran out of other options if booked 24 hours ahead – at which time we’d be on a plane. 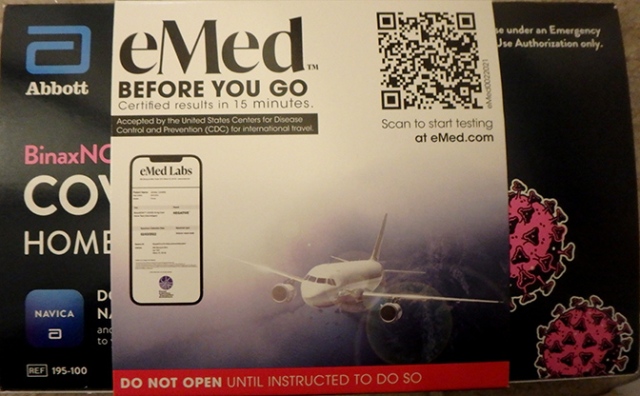 home covid test in a box

Their other option was ordering a home test from them, which has quick results, but requires an online observer watching you take the test. No other home test was acceptable, just the one you buy from Royal’s website. It takes just a few days from ordering for the test to arrive. The telehealth thing was already out of my comfort zone. Then the test came, with a qr code on the box saying that must be scanned to start the process. My phone has a scanner for that, but I’ve never used it. Not wanting to miss the ship due to last minute flight changes, I left 2 days ahead for a hotel at the closest airport, then flew out 1 day ahead for a hotel near the dock. So this meant doing an unfamiliar test in unfamiliar ways the morning I’m trying to leave. There was no opportunity to familiarize yourself with the procedure ahead of time either since the box clearly said not to open it until instructed to do so, and it had no instructions on the outside. Too bad they don’t have Covid sniffing dogs at the port. Then they could do away with the pre-arrival testing and just have a dog check everyone on the way in – and rapid test anyone the dog was suspicious of. 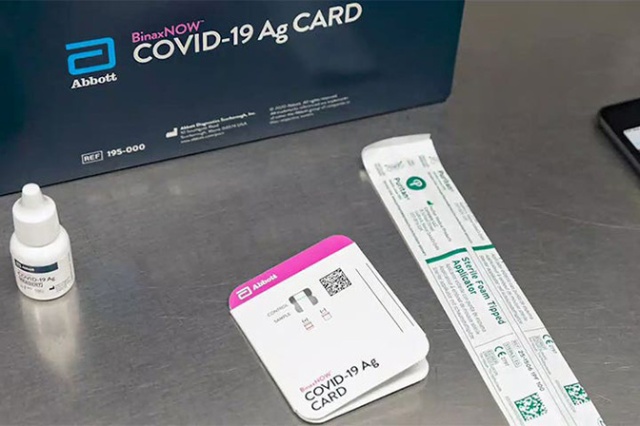 My sister who lives in a later time zone did her test first. She said the 25 minutes it said it took really took about 40, mostly due to figuring stuff out time. She also warned that you need your driver’s license handy for ID, and the people watching can see you, but you never see them, which in itself is a bit creepy. She also said that you can just scan the qr thing in the phone camera and it prompts you from there, and to set up on a flat surface like a table or desk. 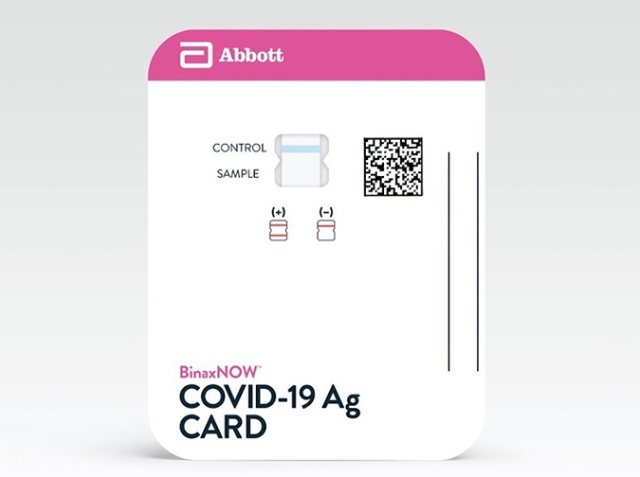 before the test the card shows a blue line

It was quite a windy day at my house. Shortly before I got started the power and internet went out briefly in a gust of wind, but came back fairly quickly. She hadn’t warned me about the necessity of making up a password so I didn’t have that ready before I started. There was supposed to be a checklist of required things in the box, but besides the fact that there actually wasn’t, since it also said not to open it until instructed to do so even if said checklist had existed it wouldn’t have been available until too late to have things ready anyway. It started out OK. The scan worked easily and the prompts went into setting up an account. This required use of a code they send to your email, only my code never came. I waited awhile, refreshed the email, and tried looking at it in my computer as well as on the phone, but no email with a code ever appeared so I asked for another. After asking for the second one the computer showed two code emails and the phone one. Trying the code that showed in both, in the phone it said it was the wrong code, but in the computer it said the exact same code was correct and it allowed me to set up the account. I got to the part where you put in a password and then enter it again to verify. Only as I was entering the password a second time for verification a very loud explosion of a nearby transformer blowing up was accompanied by an instant power outage, which also killed the internet. Had it accepted the code in the phone that may not have been a problem, but since I was on the computer at that time I didn’t quite complete the verification. After that it would neither let me log in nor sign up using that email address, leading to great frustration. 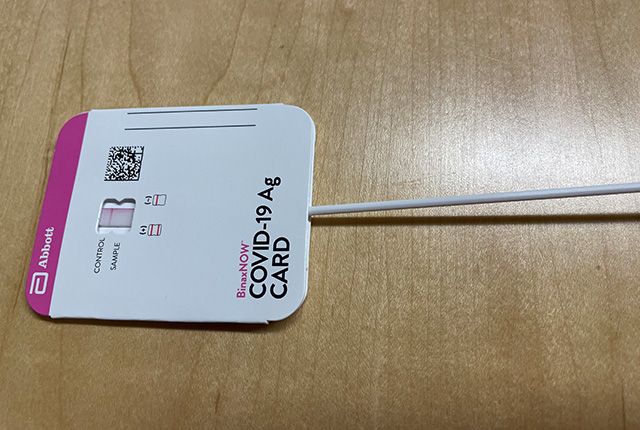 after the test you want just one pink line

Finally my husband tried with his phone and set up the account using his email address, which of course meant all the results would go to him rather than me, but at least the test could go on. They ask you to show both yourself and the test while opening the box and while doing the test so having a second person to hold the phone at the required angles is really a necessity as you can’t do all that one-handed. Barbara managed it by herself with the aid of some sort of custom phone holder she could angle just so, but the rest of us don’t have any such thing. She also hadn’t mentioned having a knife or something handy to break the seal on the box. The test itself was as easy as promised, but the whole telehealth thing and setting up the account was a nightmare. The test required opening things exactly as directed, opening the card and putting drops on it, running a swab around both nostrils several times, and inserting the swab into the card, then closing it and waiting 15 minutes for another person to contact you about the results. The phone shows a countdown cycle while you wait.

The card clearly showed what positive or negative would look like, but of course the unseen person has to verify those results. Once done they say you will get an email within 15 minutes. One comes nearly immediately with the results, the second one includes a qr code. Though those qr codes were crucial throughout the testing process,  a printed copy of the email without one was sufficient at the port. We had the other one handy on the phone screen just in case, but were not required to show it. I probably took longer than Barbara’s 40 minutes with all the issues of not getting the code and then having the account freeze up and having to start over. There’s also the figuring stuff out time as it has down arrows that do nothing while the info you need is below the part of the screen that shows unless you scroll down while nothing tells you to do so, then when you find that info it sort of spins around in place, but touching the answer you want does nothing as you have to go back up and touch the down arrow while that is highlighted to actually get it to enter, again with no instructions to do so. 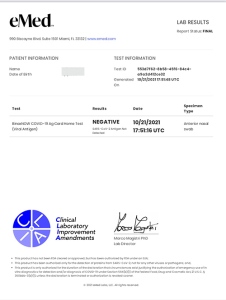 the first email you get

With that finally finished, I was able to head off to Linda’s house as we were leaving together from there and spending the night at a hotel near the airport in order to miss the next morning’s rush hour traffic and be sure we made it to our plane on time. She has an older model phone and had not been able to get the app to work so I entered her vaccine info once I got there, which was quick and easy. Then she had to do her test. It seemed to get worse with each succeeding sister. She had been forewarned about necessary items and space, and I knew I’d need to help her with the camera work so we thought she was all prepared to do it quickly.

the second email has a qr code, but they did not require it at the dock

Once again it started out fine, other than the sound wasn’t working so the first telehealth person had to text everything. That one lost contact and the sound worked with the next person. She got the account set up using her phone for the scan and her computer for the email. The violent windstorm at my place did not extend as far as hers, which is about an hour and a half and across a body of water away so sudden loss of internet wasn’t a problem there. She got as far as opening up the box, but her phone kept getting slower and slower and finally froze up. We tried again using my phone. She explained the situation to the next telehealth person, who said they could not go on with the test if the box had already been opened. They said she would have to start over with a new box and a new person, then hung up on her. Luckily the cruise line had recommended that each person have a spare test so she did have another. Her account still worked so she was able to log in and start over with a new test and a new person, and my phone worked throughout her test so we were finally able to get it done and obtain the third necessary negative result. Hers probably took the longest of all after having had to restart several times due to technical issues.

MyCruiseStories blog tells stories about adventures in cruising on ships big and small. Things to do onboard and in port. Anything connected to cruising. Also food, travel, recipes, towel animals, and the occasional random blog.
View all posts by LBcruiseshipblogger →
This entry was posted in Caribbean, Royal Caribbean, Symphony of the Seas, USA and tagged Covid test, cruise, cruising post covid, new cruise boarding requirements, travel. Bookmark the permalink.