Enclave at the Spa on Royal Princess

Posted on May 29, 2020 by LBcruiseshipblogger 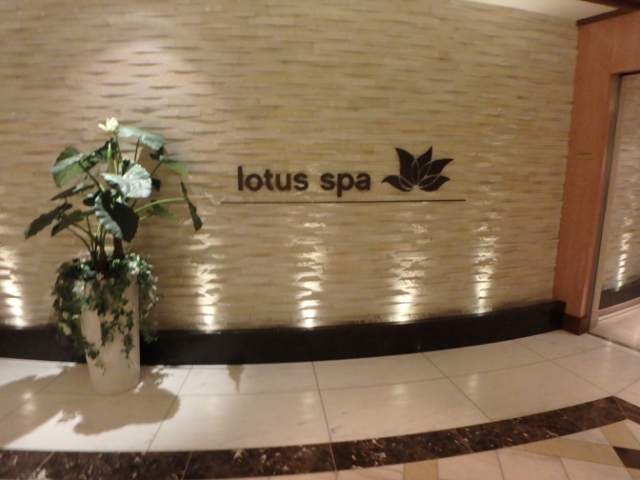 entrance to the spa

On most cruise ships the spa and gym go hand in hand being located next to each other and sharing a locker room. There’s generally a beauty salon in the vicinity as well. Royal Princess breaks with that tradition having the spa near the bow on deck 5 and the gym at the stern on deck 17. Naturally being that distant each has its own locker rooms. The salon is located on deck 5 near the spa. 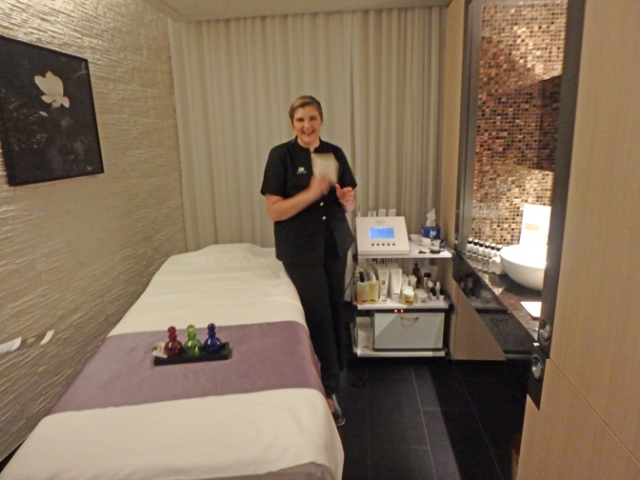 treatment room on the spa tour

The spa offers all sorts of services. There’s a variety of massages, facials, acupuncture, and teeth whitening among their offerings. Spa services don’t come cheap. On ships that have a good one we consider the thermal suite to be the best value for the money since the others have limited time, but the thermal suite is available for the entire cruise. 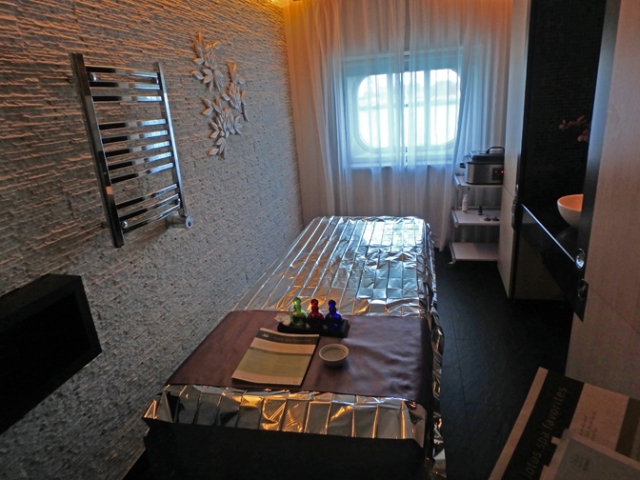 treatment room at the spa

On Royal Princess the thermal suite is called the Enclave. All of the amenities are contained within a single room. It’s fully within the interior of the ship. There’s no windows or view so passengers can seek an inner peace rather than watching peaceful scenery go by. 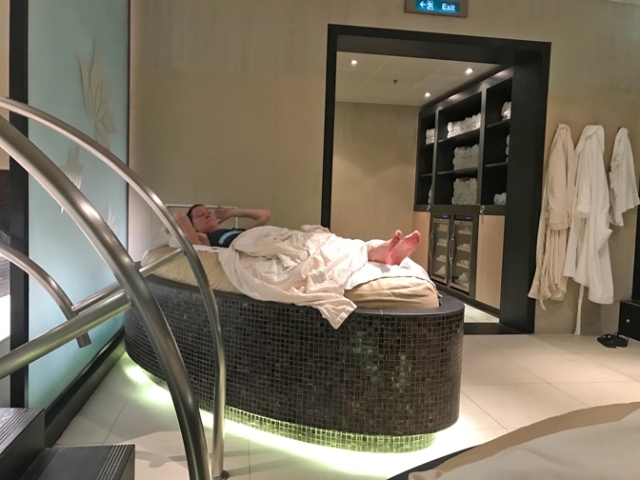 waterbed in the enclave with the towel station in the background

At the entrance there’s a water station with plain or fruit infused water in jugs. Cups stacked nearby invite people to take a drink with them to enjoy while they relax in the enclave. Towels are available at the end of the hall to pick up on the way in. Robes come from the lockers in the locker room, so people who want one already have those and spa shoes before going in. 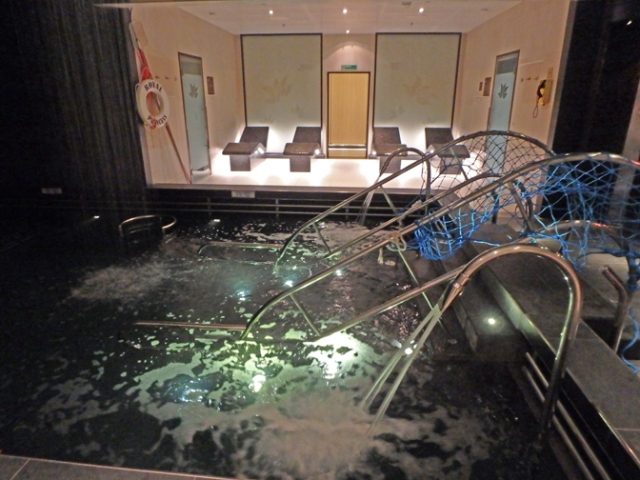 pool in the enclave

The hydrotherapy pool dominates the center of the room. It has a stairway into the pool on one end. Different buttons around the pool activate various water features, with most people’s favorite the rack at the far end where they can sit and relax in the jets. It would have been nicer if they had placed the rack a few inches lower so there would be more water over anyone sitting there. Each side of the pool has a sort of ring with jets, big enough for one person, also a popular feature. The giant rainshowers hovering over the lower stairs were not well-liked. People rarely ever turned them on, but if anyone did most people ducked around it avoiding the cold rain as much as possible on their way into or out of the pool. They had some temperature issues with the pool during our cruise. It was closed a couple days for being too cold, and most of the time when it was open it was a bit chillier than what most people like. Only one day it was really nice and toasty warm. 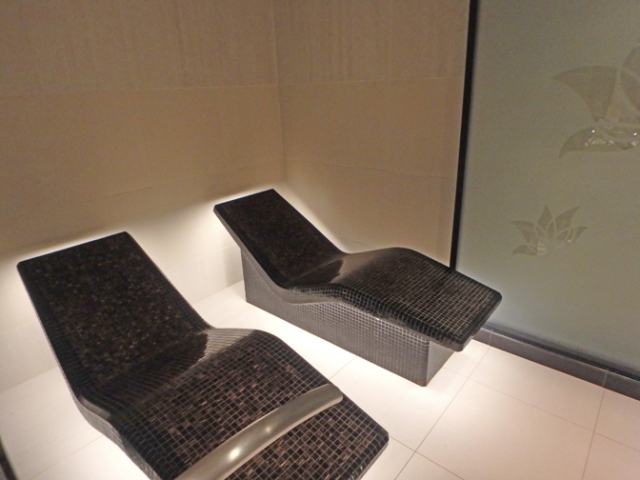 Opposite the pool there’s a set of 4 showers, with each one doing a different thing. These also tended to be cold so we stuck with the one that would generally get warm. The enclave also had a dry sauna and two steam rooms, one scented and the other not. These rooms were toasty – too hot to stay in for very long. A row of heated ceramic chairs sat along one edge of the room between the sauna and one of the steam rooms. The end of the enclave opposite those had more heated ceramic chairs in a semi-separate area raised above the rest of the room and behind a divider. The heated ceramic chairs hit the Goldilocks zone. After other features being too hot or too cold, they were just right. 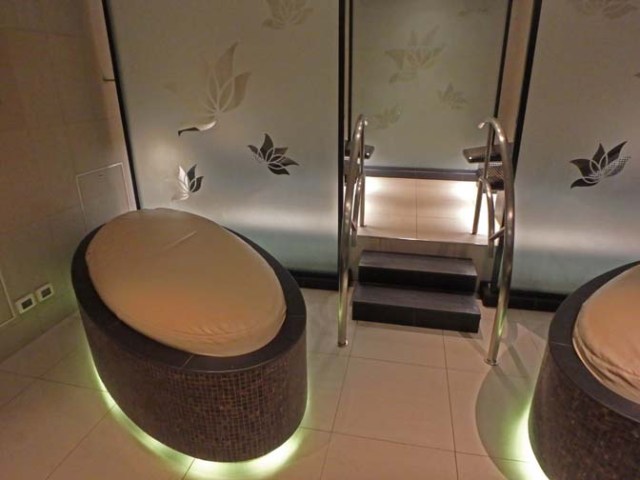 In front of that divider sat two sort of waterbed tables, something I’ve not seen before on any other  ship. The waterbeds were my older sister’s favorite thing in the room, where my younger sister and I tended to prefer the heated ceramic chairs. 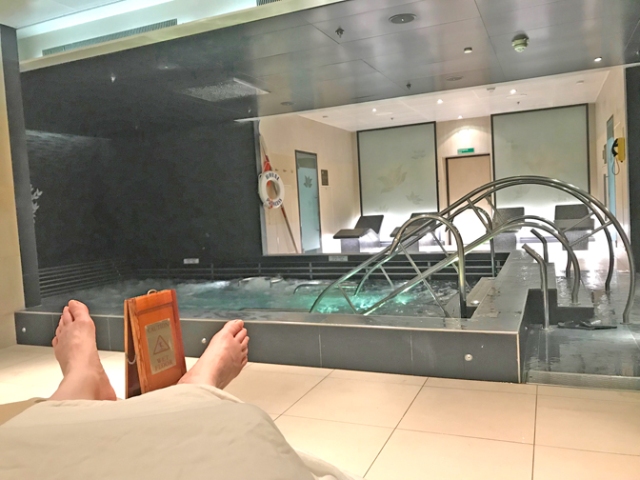 relaxing in the enclave

MyCruiseStories blog tells stories about adventures in cruising on ships big and small. Things to do onboard and in port. Anything connected to cruising. Also food, travel, recipes, towel animals, and the occasional random blog.
View all posts by LBcruiseshipblogger →
This entry was posted in Princess, Royal Princess, Shipboard Life and tagged #RoyalPrincesssSpa, Enclave, photos, Princess Cruises, Royal Princess, spa, thermal suite, things to do on a cruise ship, travel, vacation. Bookmark the permalink.