Posted on December 27, 2019 by LBcruiseshipblogger

Before our 20-day MSC Lirica cruise from Venice to Dubai, we decided to spend a bit of time exploring parts of Europe where we’ve never been. We left 10 days ahead of the cruise, but the flight didn’t arrive until the day after leaving so we had 9 nights to spend there. Googling the best price for the flight put us on British Airways flying through Heathrow in London, an airline and airport we had no experience with. We started with a night in Zurich, Switzerland, then took the train to Lucerne, Switzerland; Vaduz, Liechtenstein; Innsbruck, Austria, and Venice, Italy.

Flying into London’s Heathrow Airport we had just an hour scheduled between flights and our plane came in 20 minutes late. We were at the back so more time ticked away waiting to get off. It came in at the B gates, with the next flight leaving from the A gates of the same terminal. Getting from one set of gates to the other involved a train ride, a lot of walking, and a trip through security. Why they make people go through security to get from one gate to another is beyond me. Obviously everyone already passed security before getting on the first plane. At some airports they give people with tight connections some sort of assistance in getting to the next plane, whether that comes in the form of a speed pass, an escort, or a bypass of lines. This airline and airport provided nothing but delays.

There were long lines at security. They had no priority or speed lines for those with immediate flights so we were stuck behind all the people whose planes must have been several hours distant as it took them about 5 minutes each to put their belongings in the bin for screening, dawdling slowly as if they hadn’t a care in the world and had all day to wait for their next plane. When we asked if we could go ahead of people who had more time before their plane the screener just said everyone there had a plane to catch. He totally ignored the fact that it makes a huge difference if that plane is due to depart in 20 minutes like ours was at that point, or several hours distant as some people’s were. 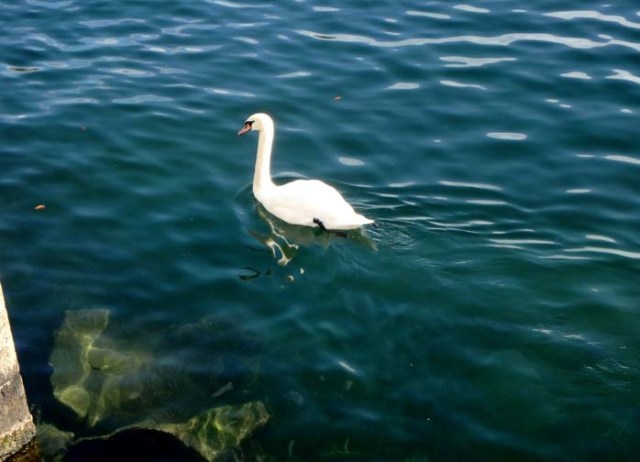 swan in the river in Zurich

We finally got through the screening, with less than 10 minutes to get to our flight, which was of course at the farthest possible gate from security. We ran all the way to the gate and could see the plane still sitting there, but were told the doors had been shut and nobody else could get on. British Airways is not very helpful. Besides doing nothing to help speed the way for people with a long distance to go and not much time between planes, once you miss it they really don’t care. All the people at the gate would say was to go to the help counter, which was of course quite a long distance from the gate. There they said the next flight was 5 hours away. They gave us each a voucher worth 10 pounds towards the price of a meal, but did not put the gate number on our tickets and would not say what gate the plane would be at, just somewhere in the A gates and to wait until it was posted. The A gate complex was something like an expansive shopping mall spreading out over a large area with lots of shops, some eateries, and here and there a gate thrown in.

There was one spot with lots of seats in front of a giant readerboard where they posted the gates – eventually. They didn’t post the one for our plane until it had already started boarding so in spite of being there 5 hours ahead of the plane it was still a mad scramble to get to the gate on time as it was of course nowhere near that readerboard. At least we were already within the A-gate complex so we didn’t have to pass through security or once again we would have missed the plane. We talked to someone who missed their plane while sitting at the airport waiting in an airport lounge because their gate wasn’t posted in time to get from the lounge to the gate before the plane left. It really makes no sense for an airport to keep where planes will be a secret for so long that passengers have no time to get there from wherever they are once the information is finally revealed. Heathrow is not an airport I’d pass through again given any other option. Nor is British Airways an airline I would choose again if anything else reasonably priced was available. Besides their lack of helpfulness and refusal to post gate information in a timely manner, all of our 4 flights this trip were at least 20-40 minutes late at landing. 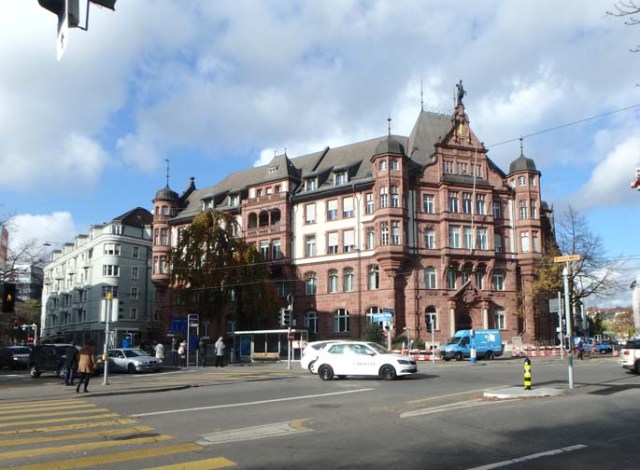 We had just one night in Zurich and had intended to get there in time to spend the afternoon sightseeing as well as the next morning before catching an afternoon train. With the delay in flights it was long past dark by the time we arrived. We stayed in an apartment found on Booking.com called Main Station Studios. It was conveniently located across the street from the train station, which was its best feature. It did also have a comfortable bed. The nightly price there was better than anything else available in that area of Zurich during our stay. That apartment also books through Airbnb. Even with the address printed out on the booking info, our taxi driver had a heck of a time finding it.

this is what they called a kitchen in the Zurich apartment

The apartment was in a building where some units are nightly rentals like the one we had, but others are where people actually live. The cost of living must be pretty high in Zurich for anyone to live in a place like that. Calling it an apartment was a stretch. It had less than some hotel rooms both in space and amenities. The total square footage was actually smaller than the average hotel room. The kitchen consisted of a small counter on one side of the entry hallway, which had a hot plate, a mini-fridge, a tiny sink, and a cupboard.

other than a small table between the wall and bed on the side not shown, this is it

There was no closet, just a rolling rack with a hanging bar and a shelf. The bathroom was spacious, but the main room had barely enough space for a bed and a small table with a couple little chairs. There was no other furniture other than a TV, and no room for any. The room had a window with a Juliette balcony. It was fine as a place to stay for a vacation, but I can’t imagine living there. Replacing the bed with a sofa bed or Murphy bed would make a little living space, but it still wouldn’t be much. At least with the hot plate we had somewhere to heat water for tea, and it did have a coffee maker, something none of the other places we stayed in Europe had. Most had nowhere to heat water at all. There was one towel each provided, but no wash cloths. Apparently Europeans don’t use wash cloths as they are rarely ever available there. Bedding consisted of 2 separate pods that were a combination of sheets and a comforter all together in a sleeping-bag like bundle, which is what we found at all the hotels that trip. 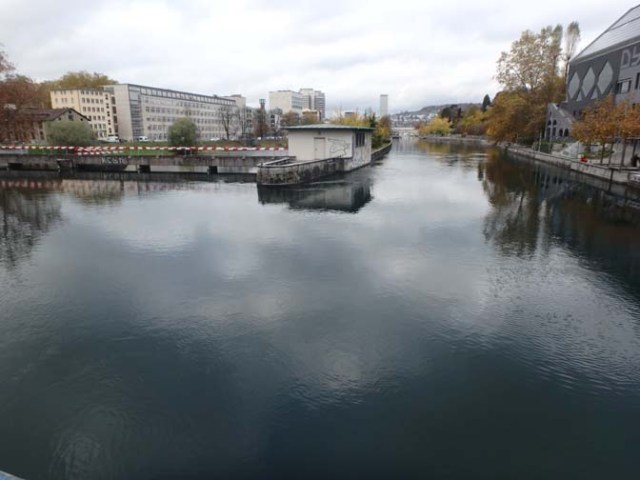 The city of Zurich sits at the north end of Lake Zurich in northern Switzerland. The picturesque lanes of the central Altstadt (German for Old Town), on either side of the Limmat River reflect its history. The area has been continuously inhabited since the Roman empire, and there is archeological evidence of human habitation as early as the 5th century BC. Zurich is in the German-speaking part of Switzerland, but most of the population also speak English, which is very helpful for English speaking tourists. Everyone we came across in Switzerland spoke English very well. They learn it in school starting at the elementary level. Most Europeans speak multiple languages, as do crew on the cruise ships from a variety of countries. The USA is definitely lacking compared to much of the rest of the world when it comes to language education.

Zurich’s Altstadt consists of Medieval houses, narrow lanes and buildings from the Renaissance period. The double towers of the Grossmünster (Great Minster) are Zurich’s major landmark. According to legend, Charlemagne built the towers at the location where the graves of the city saints Felix and Regula were discovered. Further sights worth seeing include the Peterskirche (Peter’s Church), which has Europe’s largest clock face, and the Fraumünster (Minster of Our Lady), which is known for its stained glass windows by Giacometti and Chagall. 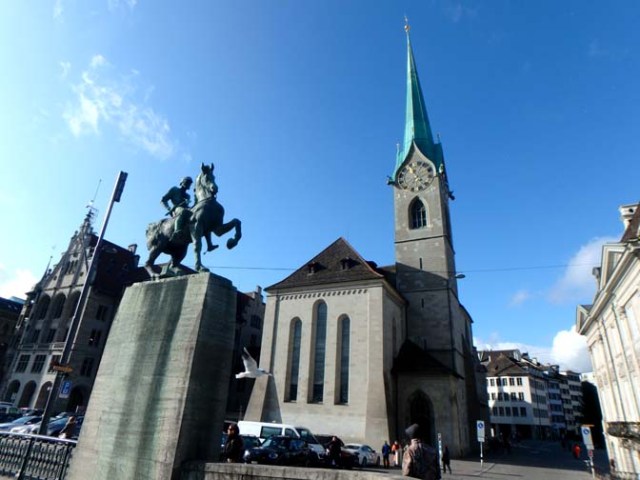 Things available to do in Zurich depend on the time of year. Summertime activities include a Riverboat ride or lake cruise (ends October) and a funicular to Stoos-Fronalpstock. A stroll through Old Town works any time of year, and of course snow sports are seasonal to wintertime. Other options which may or may not be open depending on the time of year include Mount Titlis cable car, Rapperswil fairy tale town on Lake Zurich, Rhine falls, Flumserberg mountain, Einsiedeln Abby, Lindenhof fort/park, Mykugelhopf Zurich sweet tour (chocolate samplings), and museums.

MyCruiseStories blog tells stories about adventures in cruising on ships big and small. Things to do onboard and in port. Anything connected to cruising. Also food, travel, recipes, towel animals, and the occasional random blog.
View all posts by LBcruiseshipblogger →
This entry was posted in Europe and tagged airplane, British Airways, Heathrow, London, photos, Switzerland, travel, Zurich. Bookmark the permalink.