How to Fold a Towel Skunk

Posted on July 4, 2019 by LBcruiseshipblogger

Some people might think making a towel skunk stinks, but I had a request for instructions on how to make one, so I had to figure out how. Here it is, a brand new My Cruise Stories original towel animal. Possibly the only towel skunk folding directions in existence since the person requesting it could not find them anywhere.

Use 1 black washcloth to make the skunk’s head. Start by folding the washcloth in half on a straight line so it comes out as a rectangle.

with both sides folded over it looks like a triangle

fold over the long edge

Fold long edge over on top of the side with triangle folds. 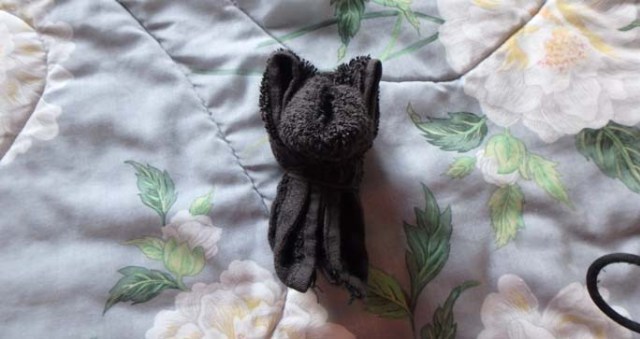 fold in half with previous folds to outside, secure with a rubber band, and shape ears and nose

Fold the whole thing in half with the long fold to the outside. Carefully pull the tips of the corners of the triangles out from under folded edge to make small ears. Shape nose as desired and secure long bits with rubber band under head.

roll both ends of bath towel to center

The skunk uses the standard towel animal body. Start by laying the bath towel out flat. From the short ends, tightly roll both sides to the center.

Fold in half with the rolls to the outside. Pull the tip out of the center of each roll.

take the tips of one roll in one hand, and the other roll in the other hand

Pull them tight and stretch into animal body with four legs. If you can’t pull all 4 legs all the way out at once pull them as far as you can, then set the body down and do one pair at a time. Set the body down with the longer part of the towel running lengthwise across the legs on top. (The side shown in the picture above.) 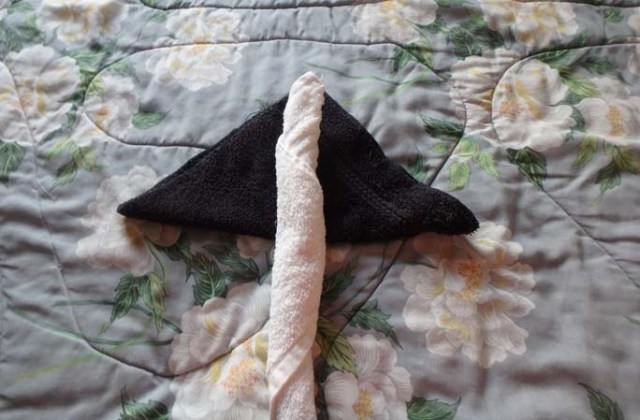 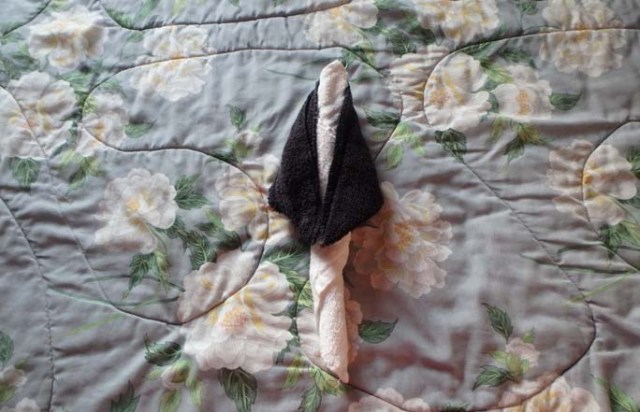 fold the sides of the triangle over the roll.

Fold the black triangle over on both sides along the edges of the white roll.

Set the long part of the white stripe that is not within the black washcloth between the rolls on the towel body, with the tail part hanging out beyond the back legs and adjust the tail part so the black doesn’t cover the white.

Put the head between the legs at the other end of body. Tuck the end of the stripe into the  back of the head and arrange the stripe, tail, head, and body as desired.

Add eyes. Googly eyes work nicely with a bit of double-stick tape to hold them on. Eyes made from things like felt, paper or bits of cloth work fine too. If you really wanted to get creative you could add a little white felt stripe to the face so the skunk has a stripe there too like a real one.

For instructions on how to fold lots of different towel animals, see My Cruise Stories Towel Animal Page.

MyCruiseStories blog tells stories about adventures in cruising on ships big and small. Things to do onboard and in port. Anything connected to cruising. Also food, travel, recipes, towel animals, and the occasional random blog.
View all posts by LBcruiseshipblogger →
This entry was posted in Towel Animals and tagged #towelanimals, how to fold a towel skunk, photos, step by step towel skunk folding instructions with pictures, towel animals, towel skunk. Bookmark the permalink.

2 Responses to How to Fold a Towel Skunk