Posted on December 1, 2017 by LBcruiseshipblogger

bridge view from the stern of the Arcadia

Arriving in Australia by cruise ship is far nicer than arriving by airplane. Besides the fact that the journey is far more fun, cruise ship passengers are not sprayed with disinfectant before disembarking like airplane passengers sometimes are. Customs is done while underway before arriving so disembarkation is quick and easy too. 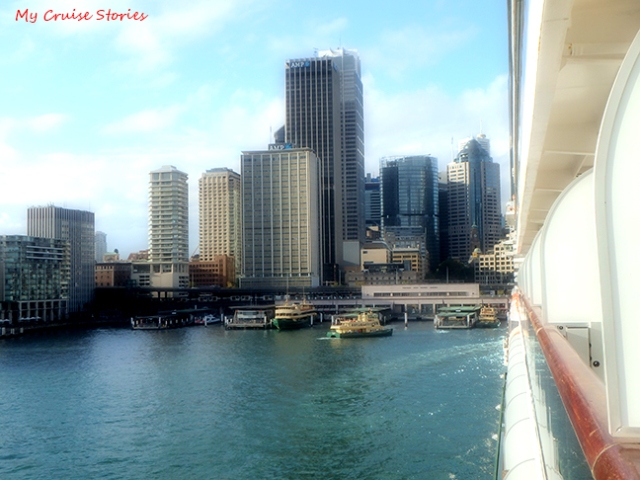 view of city, train station, and ferries from P&O Arcadia in Circular Quay

Sydney, Australia has two cruise ship ports. Ships cruising in or out of Sydney dock either at the Overseas Passenger Terminal at Circular Quay or at the White Bay Cruise Terminal in Balmain. White Bay has two berths, but ships have to fit under the Sydney Harbor Bridge to get there. Public transportation is harder to find at White Bay.

Circular Quay has one berth for cruise ships at the Overseas Terminal. It’s a great place to dock because Circular Quay is a tourist destination in itself. It has all sorts of harbour cruises, ferries, or water taxis available there as well as a train station within sight of the ship. Both the famous Harbour Bridge and iconic Opera House are within walking distance and dominate the view from the ship when docked there. You can also see Luna Park under the far side of the bridge. Sydney’s oldest area called The Rocks is just a short walk away. The Rocks is full of historic buildings, shops, cafés and pubs. My daughter the Aussie says the G’Day Café in The Rocks has the best kebabs in all of Sydney. Cruise ships too large to sail under the bridge stop at Circular Quay. The city centre is nearby. Besides the train tourists can easily get around by city bus or see the sights on the hop on hop off bus, which stops close to the nearby opera house. 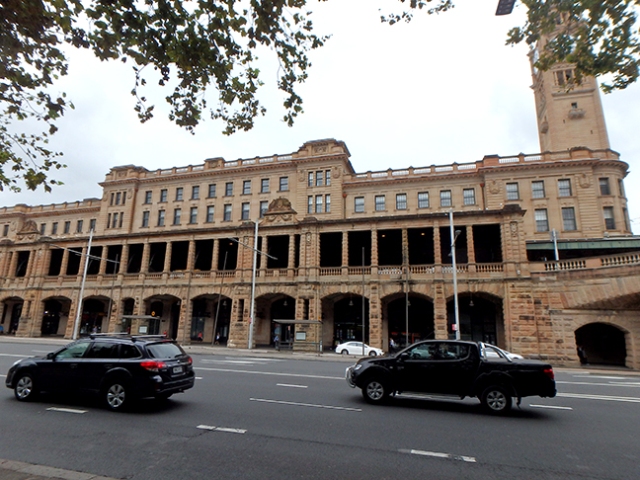 Ships visiting White Bay Cruise Terminal sail under the Harbour Bridge. This terminal is kind of out in the middle of nowhere, but you can take a ferry from the White Bay Captain Cook Wharf to either Circular Quay or Darling Harbour, another major tourist destination. I’ve never been to White Bay since the two cruises I’ve taken to Australia docked in Circular Quay, as did the round trip cruise to Tasmania we took from Sydney on Carnival Legend. Americans and Europeans need an electronic Visa to visit Australia, which is obtained online.

The Legend was a fully domestic cruise so customs was never a concern on that voyage. On both P&O Arcadia and Royal Caribbean Explorer of the Seas customs officials came onboard and interviewed everyone whether they were disembarking in Sydney or just passing through with the ship. Arcadia was on a world cruise. Some passengers stayed on board nearly 4 months for a round trip from South Hampton England which crossed both the Atlantic and Pacific oceans twice. Others cruised various legs of the voyage embarking and disembarking at a number of different ports along the way. The ship stayed overnight in Sydney, but since that was our final destination we disembarked the morning we arrived and took the train to our daughter’s house about an hour out of Sydney.

Things to do in Sydney, Australia

From Circular Quay you can get just about anywhere too far to walk to in Sydney by train, boat or bus. Hop on hop off busses do a route through the city and another route farther out which includes the famous Bondi Beach. Besides the regular trains, light rail runs through some areas of the city. The train from Circular Quay stops at Central Station, from which you can catch trains or light rail to all sorts of destinations including the Blue Mountains or the airport. 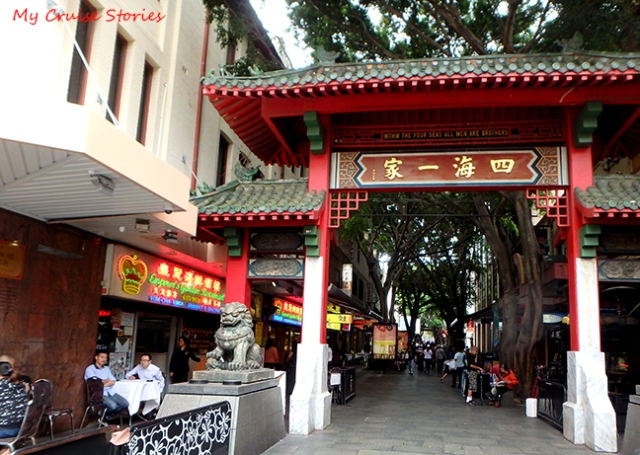 Some of Sydney’s highlights besides the Harbour Bridge, the Opera House, Circular Quay, Darling Harbour, The Rocks, and the city centre include Paddy’s Market, the Queen Victoria Building, Centerpoint Tower, and Chinatown. Sydney also has museums, art galleries, and beaches.

Sydney Harbour Bridge with Luna Park across the water

The Arcadia offered a 4-day train trip shore excursion for passengers disembarking in Sydney and those moving on with the ship to the next port could choose from Leisurely Sydney, Sydney Sights Opera House & Bondi, Blue Mountain Experience, Sydney Harbour Bridge Climb or Hunter Valley Wine Tasting and Lunch if they wanted to book an excursion rather than exploring on their own. The ship docked at Circular Quay the first day, moved out to anchor during the night, and tendered from offshore the second day.

9 Responses to Cruising to Sydney, Australia