Afternoon Tea on the Legend

Posted on February 26, 2016 by LBcruiseshipblogger

Whenever we’ve gone to the afternoon teas on Carnival ships before they seemed like one of the best kept secrets on the ship. Each tea we’ve attended had a different selection of excellent treats found nowhere else on the ship, and a small number of people in attendance. 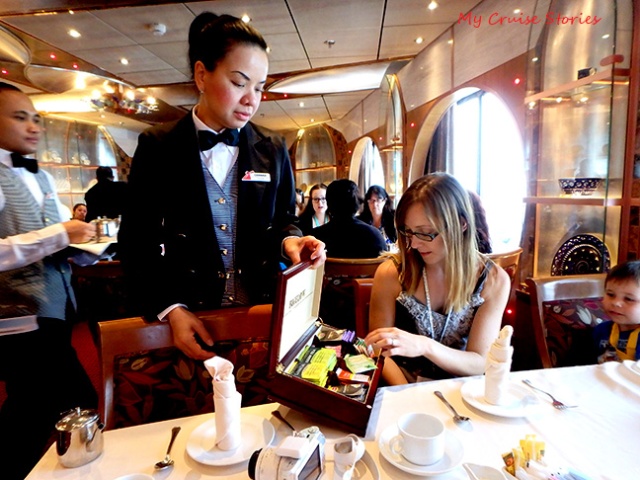 Apparently Australians like their tea far more than Americans do. Afternoon tea on the Legend drew quite a crowd. Carnival serves afternoon tea at 3pm on sea days, with the location published in the Fun Times daily newsletter delivered to each cabin the previous night. 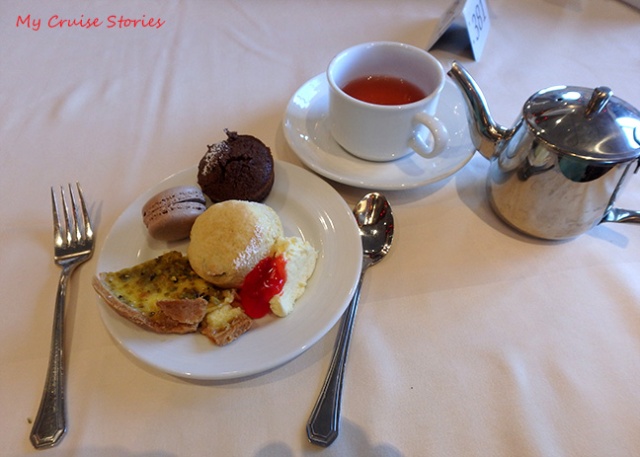 tea biscuits with cream and jam and other goodies

Just before 3:00 a small crowd gathered outside the locked door to the dining room. When the time came the door opened and people filed in, following the host to the prepared tables near the windows at the stern of the ship. The crew seated guests in an orderly fashion flowing from one table to the next as the line moved along. More people streamed in once the initial crowd got seated. Soon they filled an area several times as large as we’ve ever seen used for afternoon tea before. 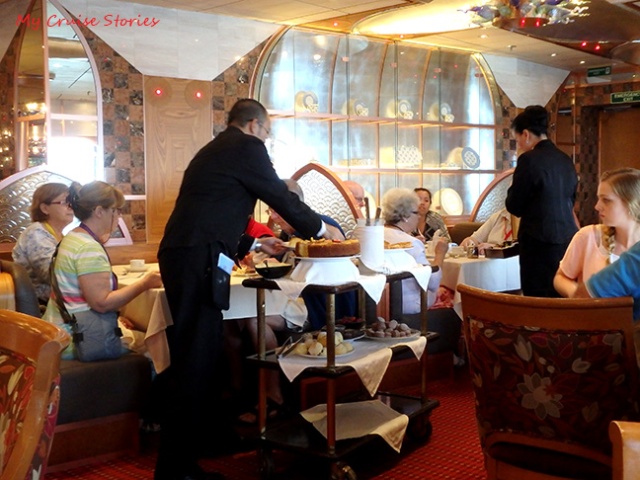 Tea service on the Legend

Waiters visited each table with a selection of teas, followed by teapots of hot water. Once people stopped trickling in the waiters rolled out the tea carts. Starting with a cart at each end of the occupied area of the dining room, the waiters worked their way toward the middle of the tables filled with people. At each table they stopped to offer the occupants their choice of any or all of the delectable selection of treats available on the cart. Even my 3 and 5 year old Australian grandkids enjoyed the tea, each one finding treats to their liking and having their tea the Aussie way – with milk.

goodies on the tea cart

I’ve heard some people don’t go to the teas because they don’t want to dress up, but they needn’t worry because the tea doesn’t seem to have a dress code. People come as they are. A few dressed up, most came casual in jeans or shorts. People are thinking of High Tea when they think of it as fancy. Afternoon tea is a casual affair. The food is good and they do have coffee available for people who aren’t into drinking tea.

MyCruiseStories blog tells stories about adventures in cruising on ships big and small. Things to do onboard and in port. Anything connected to cruising. Also food, travel, recipes, towel animals, and the occasional random blog.
View all posts by LBcruiseshipblogger →
This entry was posted in Australia, Cruise Food, Legend, Shipboard Life and tagged afternoon tea, cruise, cruise ship tea, food, photos, tea, things to do on a cruise, travel, treats. Bookmark the permalink.

2 Responses to Afternoon Tea on the Legend