Posted on September 4, 2015 by LBcruiseshipblogger 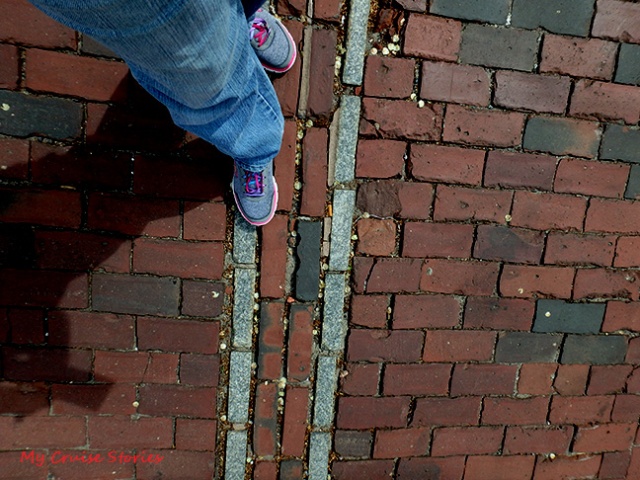 If you have a day to spend exploring Boston, walking the freedom trail brings you to a lot of historical sites and unless you choose to go inside any that have a fee or donation box it doesn’t cost anything.  Though the trail does not have much in the way of signs, it does have a brick line in the sidewalk to lead people along the way. 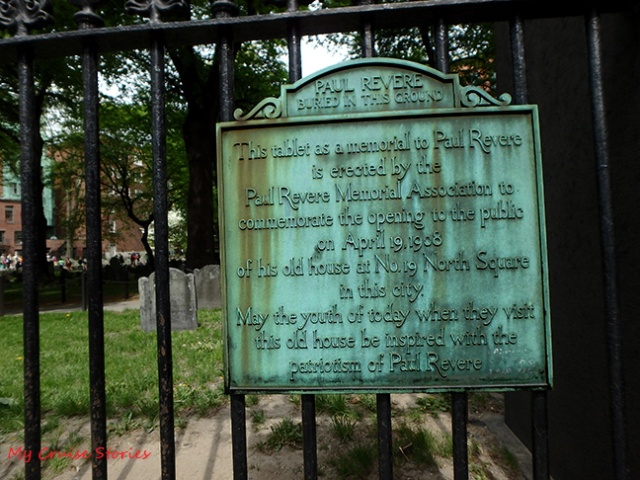 Boston’s Freedom Trail runs for 2 1/2 miles from Boston Commons to the USS Constitution at the Boston Naval Yard. It’s fun to walk the trail and to look at historical places from the revolutionary war.  Some sites like the cemetery with Paul Revere’s grave let people in for free.  Others such as Paul Revere’s house allow tourists inside for a fee.  Some of the churches just ask for a donation. Some buildings house shops and welcome anyone through the door, others you just look at from the outside. 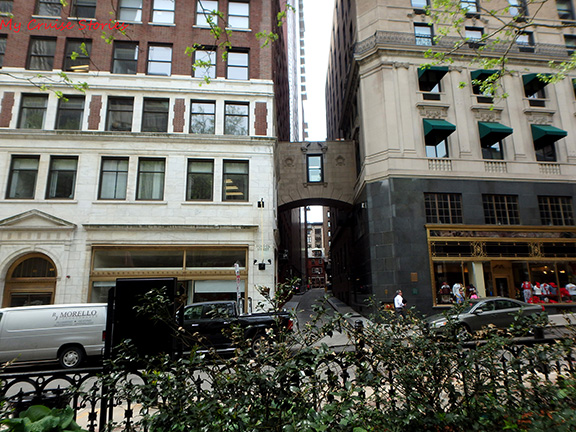 The brick line in the sidewalk clearly marks the trail for most of the way, though in a few spots it has become a bit worn and one place had fruit stands from some sort of farmer’s market making a small detour off the brick line necessary as it passed under a fruit stand. You do have to pay attention to the ground though as the line may suddenly veer off around a corner so anyone looking straight ahead could miss the turn and find themselves lost if they went too far before wondering where the line went. 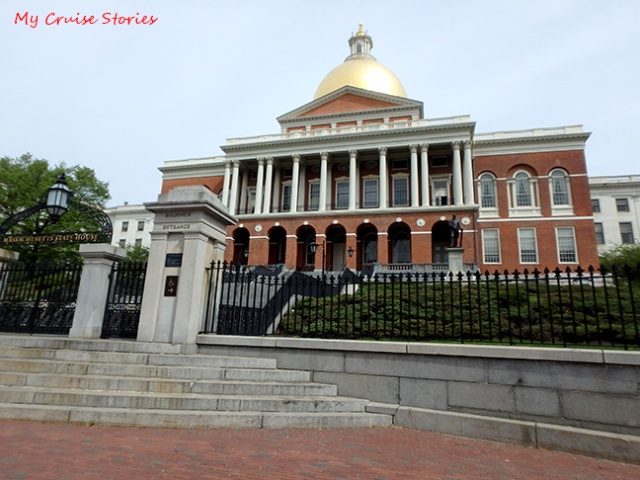 State House across the street from Boston Common

We took the train into town, which on the previous day had mainly college kids who jumped right up to give their seats to anyone older than them. The second day the people mostly looked around 30-40 and none of them even glanced up to see who got on the train at any stop, let alone offered anyone a seat.  Not that I wanted anybody’s train seat, but these people seemed so lost in their cell phones, tablets or books that they probably wouldn’t have noticed if a 95-year-old blind one-legged person on crutches got on the train. 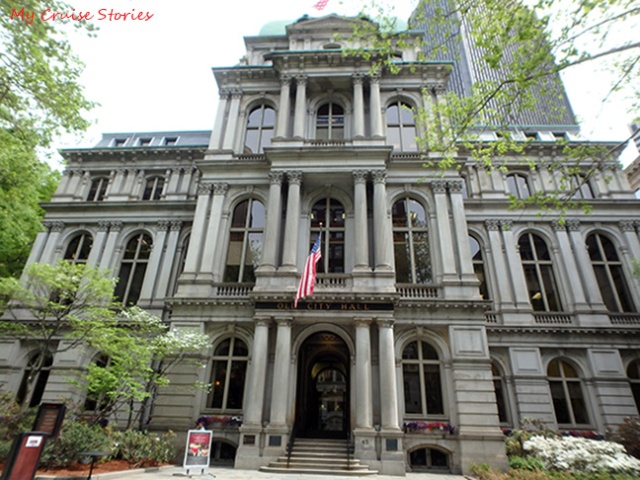 We got off at the Park Street station again in the Boston Commons. We knew the trail started somewhere in the park, but found no signs and no painted stripe, which we had heard marked the trail. We did find a brick stripe leading to the state house, and knowing it was one of the destinations we followed that to see if we could find any other information there, but other than the brick trail we found only a sign about a black heritage trail. We followed the brick line again figuring it must be the marker rather than paint, which it did turn out to be.  The brick line meandered through the park in more than one direction from the state house, but following it uphill on the sidewalk by the train station led to the rest of the trail. 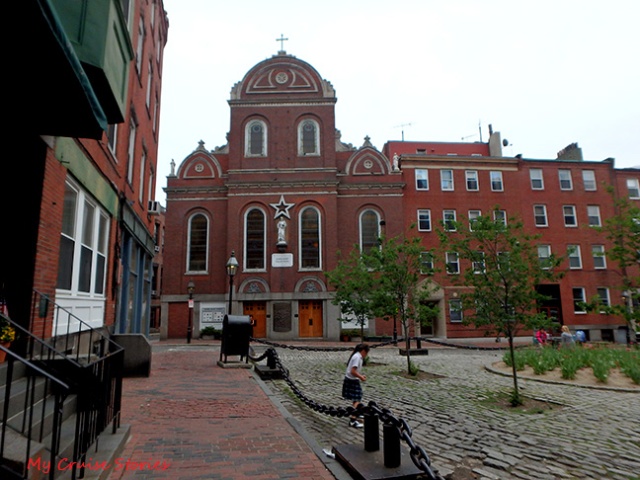 The trail went past quite a few places of historical significance from the revolutionary war. A lot of other buildings in the area also had interesting old architecture whether or not they had any revolutionary war ties. 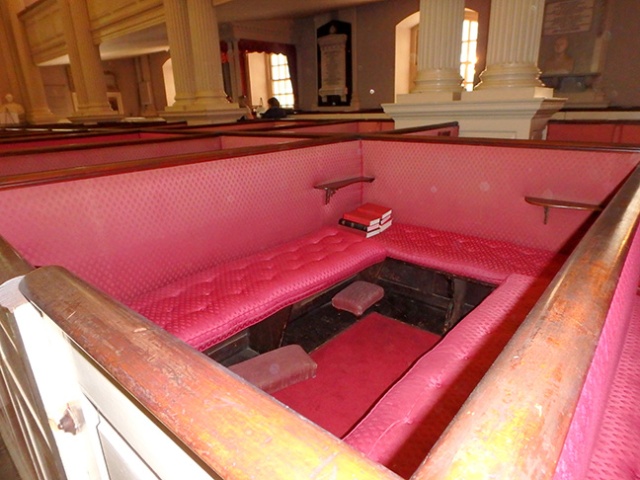 We went inside a couple churches, both of which had the pews in cubicles rather than the open pews modern churches have. Back in the day families had to buy a pew to attend church there. Central heating hadn’t been invented yet so the walls helped keep out drafts.  People brought blankets or even the family dog to help them stay warm. Some worshipers had little coal burning heaters, which could not have been good for people’s lungs. The pews in the galleries on the second floor were available for people who could not afford the downstairs pews. 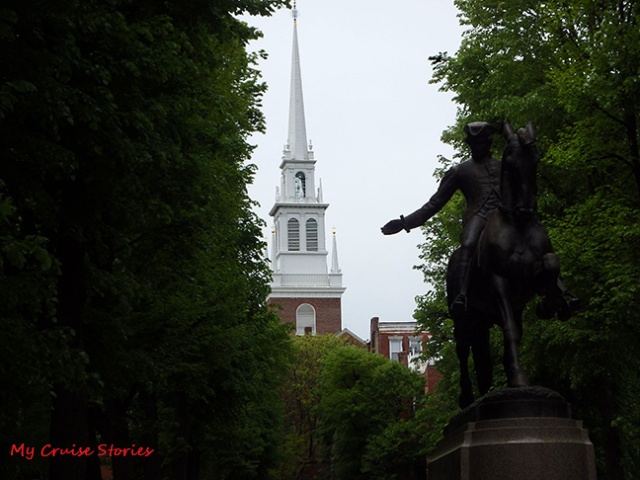 The Old North Church and a statue of Paul Revere

At the old North Church of One if by land and two if by sea fame (from Paul Revere’s Ride by Henry Wadsworth Longfellow) they said the person who hung two lanterns to warn people of an approach of the British by sea had to climb the very tall tower in total darkness.  Apparently they didn’t light the lanterns before reaching the top. Neither church let anyone upstairs or into the bell tower. 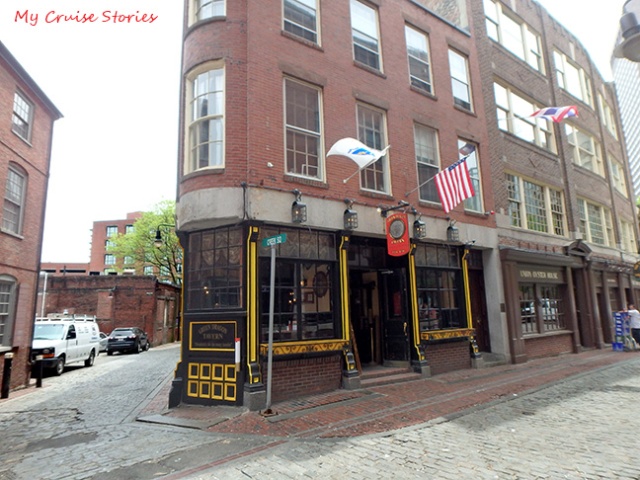 At lunchtime we came across a narrow cobblestone street surrounded in historical buildings, one called the Green Dragon Tavern.  Revolutionaries used the tavern as a meeting place for planning their resistance to England.  The British held councils there as well so when a concealed spy overheard their plans to capture Sam Adams and John Hancock it led to the plot involving Paul Revere’s ride which meant the British found the Americans armed and awake rather than sneaking into a sleepy village.  When the war ended the constitution was ratified at the Green Dragon. 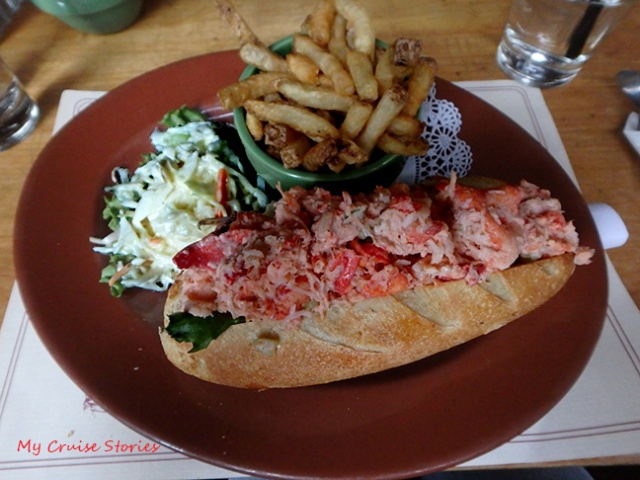 The tavern had a sign out front with lobster rolls as one of the lunch specials. I kept hearing how when in New England one must try a lobster roll, and I wasn’t even sure what exactly that was so I wanted to try it. It turned out to be a lobster salad type filling in a hoagie roll, but rather than the roll sliced in half like a regular sandwich, this one was sliced through the middle of the top and the filling stuffed in the crack. It tasted good, but was kind of hard to eat because the filling tended to fall out when taking a bite.  Later in our trip at port stops on our cruise on the Holland America Veendam I saw lobster rolls advertised in various places, all with hot dog buns instead of the hoagie roll so perhaps that was an upscale pub version of the lobster roll. 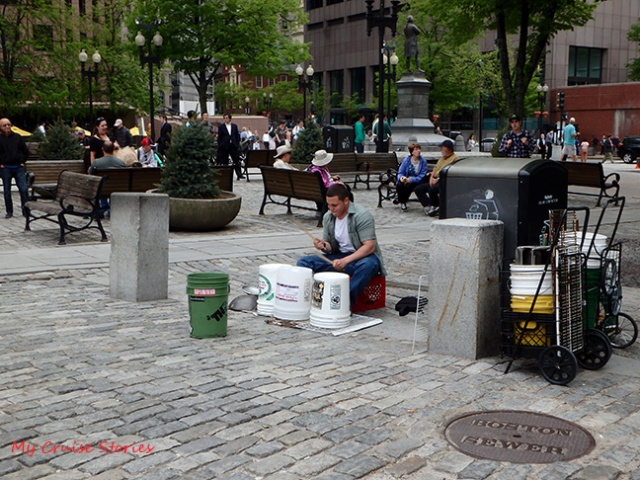 The trail passed through a little square where a busker played music on overturned plastic buckets.  He sounded good enough to attract a pretty big crowd.  We stopped to listen awhile and gave him a tip, which led to several other people offering up tips as well. 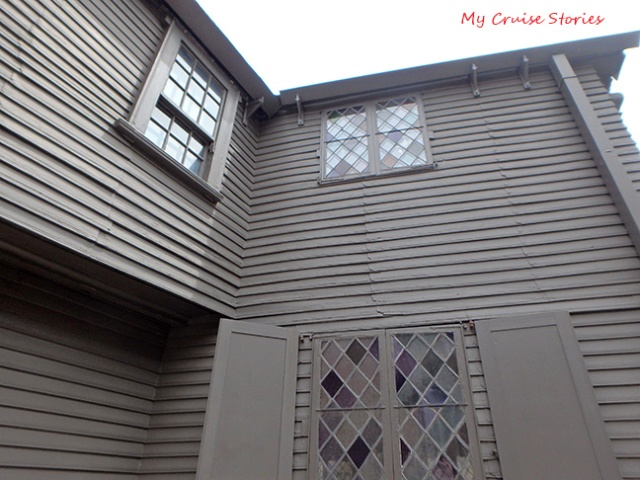 Somewhere along the way we came to Paul Revere’s house.  It just costs a few bucks to go inside so we took the tour.  Some sort of building project took up most of the yard and the entrance through the construction fence was so easy to miss that a group of schoolkids started knocking on a door that was not the entrance.  The workers tried to ignore them in hopes they would either go away or find the way in, but they didn’t stop knocking until someone finally gave up and went outside to tell them how to get in. 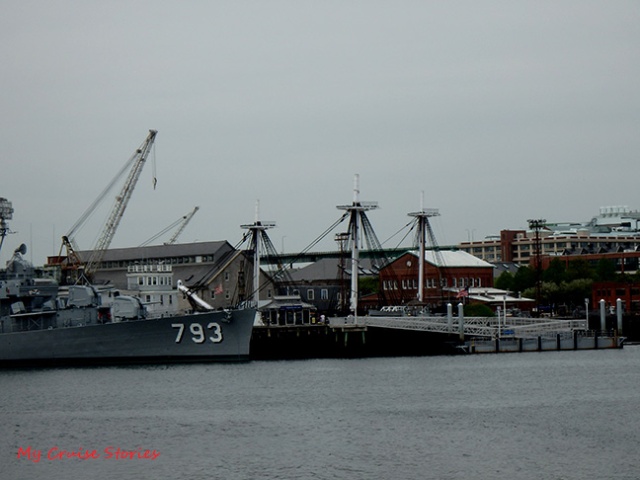 masts of the Constitution behind other ships

The freedom trail leads to the USS Constitution, the world’s oldest commissioned navel vessel afloat.  (It was named by George Washington – it’s that old.)  People normally can see the Constitution (Old Ironsides) up close and even go on board for a tour, but currently it is in drydock so it’s not actually afloat for the next few years.  Not only can people not go on board, but it is behind a fence where you can’t get any good pictures. We didn’t bother crossing the bridge to walk all the way up to it since the trolley tour had stopped by there the day before so we already knew there wasn’t much to see.  From across the water we just saw the masts.