Posted on August 7, 2015 by LBcruiseshipblogger

Would you could you on a boat?  On a boat, that’s it!  The perfect place to eat green eggs and ham if I do say so Sam-I-Am!

Carnival Legend where you too could eat green eggs and ham

Yes you too could eat green eggs and ham on a boat thanks to Carnival Cruise Line’s Seuss at Sea.  Most everyone grew up reading Dr. Seuss books so the stories and characters are familiar to all ages.  The Cat in the Hat even has his own cartoon series now (something I learned from my Australian grandkids) so he’s a star among the preschool set.

Dr. Seuss breakfast decorations include a ice sculpture of the cat – this one is on the Splendor

Carnival’s Seuss at Sea program is fun for kids of all ages.   It has 3 parts, a Dr. Seuss parade, Dr. Suess storytime, and a green eggs and ham breakfast. The festivities start with a parade for the kids, immediately followed by story time.  The breakfast takes place on the last sea day of the cruise and is the only part of the Dr. Seuss program that costs extra to attend.

On parade day on the Legend some of the kids at Camp Carnival including my granddaughter Hannah had their faces painted to look like the cat in the hat. People gathered in the designated area to get ready for the parade.  Crew members handed out pom-poms and Dr. Seuss character cut-outs on sticks to the waiting children. While the smallest kids could easily carry and wave the small lightweight pom-poms, the bigger ones had fun holding the characters. 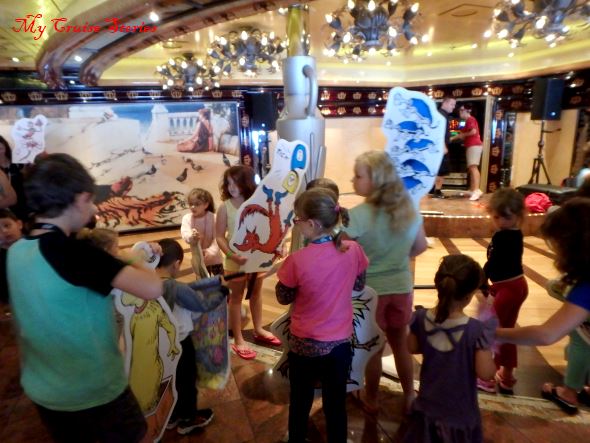 Kids gathering for the Seuss-a-palooza parade

While waiting for the Dr. Seuss characters to arrive and start the parade, the crew taught the kids to chant “Dr. Seuss is on the loose.”  Some were also given bells when the pop-poms and character cut-outs ran out. 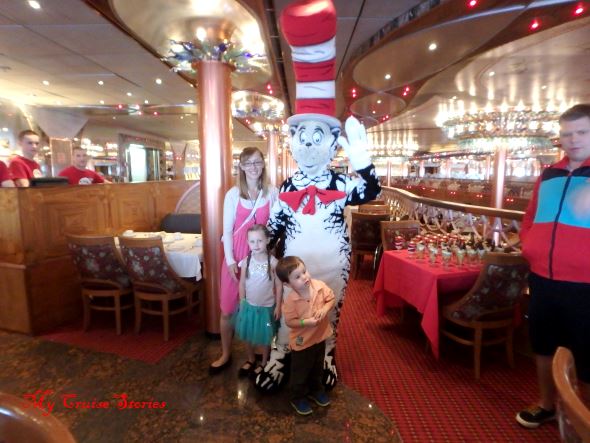 Sheri, Hannah, and Daniel pose with the Cat in the Hat at the breakfast

When life-sized characters (in the form of costumed crew people) showed up the parade started. A crowd of kids and parents noisily followed the characters from the lounge at the back where they had gathered up all the way through the ship on a deck of public areas full of people to the far end and into theater at the front. People couldn’t help but turn away from whatever they were doing and look as the long line of bell-ringing people chanting “Dr. Seuss is on the loose” passed by waving pop-poms and flaunting cartoon characters on a stick.

The Dr. Suess characters on stage at the end of the parade

Upon arrival at the main theater we saw the stage all set up for Dr. Seuss storytime.   While most of the adults found a place to sit out in the theater, the crew invited the kids to sit on the stage – with parents for the littlest ones.

the story involved a dad posing as the cat, a mom to hold props, and a couple little things, um er I mean kids

The entertainment crew picked a couple kids and a couple parents to participate in the story. They had all sorts of props and as a crew member read The Cat in the Hat more and more props came out with the story.

Suddenly the story got interrupted by the captain making a long stream of announcements on an overhead speaker. The kids who had sat so well when enraptured in the story got restless and started moving about the stage. Finally the announcements ended.

Rather than getting straight back into the story with a restless audience, the story reader said “Knock knock.”

Everyone’s familiar with knock knock jokes so it didn’t take long to get “Who’s there?” in reply.

Everyone laughed because that was almost exactly how the Italian captain actually sounded.

With the audience’s attention regained the story went on. It was very cute and far more entertaining than we thought it would be, having gone to it only because of cruising with 3 and 5 year old grandchildren.  Another great reason for cruising with kids – all the fun things you’d otherwise miss out on because you’d never think of going to them without the kids.

The highlight of the Seuss at Sea festivities is the Green Eggs and Ham Breakfast on the last sea day of the voyage. The nominal charge for the breakfast means it won’t get overcrowded because they stop selling tickets if it gets full and since they are sold  in advance the crew knows exactly how many people to expect.  Quite a few adults do attend the breakfast on their own without any children to escort them there.

table all decorated for the Dr. Seuss Breakfast

On the Splendor where things are in American dollars it cost $5 per person, but on the Legend out of Australia it cost $10 each. While we only did the parade and storytime on the Legend with the young grandkids, we went to the breakfast on both ships.   On the Splendor our group ranged in age from 12 to 90, but it’s fun to have strange things to eat sometimes no matter how old you are. 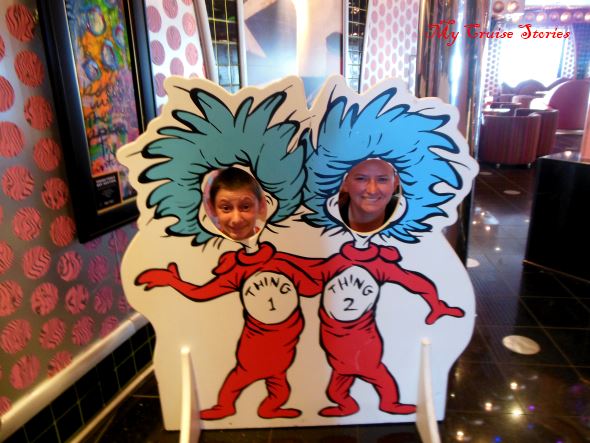 A couple things – Justin and Tina on the Splendor

On Dr. Seuss breakfast morning kids of any age can pose outside the dining room with cutouts of Thing 1 and Thing 2. The décor is all Seuss, with an ice sculpture cat in the hat, red and white striped hat centerpieces at every table, and Seuss characters and decorations all around the area.

Green Eggs and Ham Breakfast Menu from the Legend

All the waiters, waitress and other crew at the breakfast had bright red t-shirts. While thing 1 and thing 2 were the most popular things for the shirts to say, some people had other numbers ranging from thing 0 to thing 99.

The whimsical menu includes many other things besides green eggs and ham. It has brightly colored waffles, cereal encrusted French toast and other interesting choices.  Those with no imagination can order ordinary food.  In typical cruise ship fashion the portions are way too big for kids, and pretty big for a lot of adults as well.

The green eggs and ham resemble eggs benedict, but without the hollandaise sauce and the eggs are whipped as well as dyed green. The French toast with either cocoa pebbles or cocoa krispies (I’m not sure which) tasted a lot better than it sounds.  It seems strange, but was actually quite good.

Daniel and Hannah with Thing 1 and Thing 2

The young grandkids enjoyed posing with the characters, which was well organized on the Legend. They brought people up table by table and everyone got a turn. On the Splendor the character showed up and people scrambled into a line which got cut off at some point so in addition to spending a lot of time standing in line, not everyone got a photo who wanted one. All the ships should take a lesson from the Legend where everyone got a turn to pose with each character without spending their breakfast time standing in line.

even the waffles are brightly colored

Overall the Seuss at Sea program is a lot of fun and a great addition to Carnival’s family friendly entertainment.

this breakfast even comes with dessert

8 Responses to Seuss at Sea