Posted on January 2, 2015 by LBcruiseshipblogger 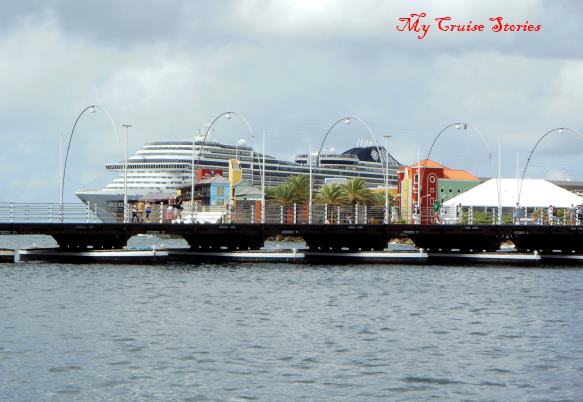 Italian actress Sophia Loren, godmother of the MSC fleet, inspired the décor aboard the MSC Divina.  The color scheme throughout most of the ship is burgundy and silver, often with sparkles. 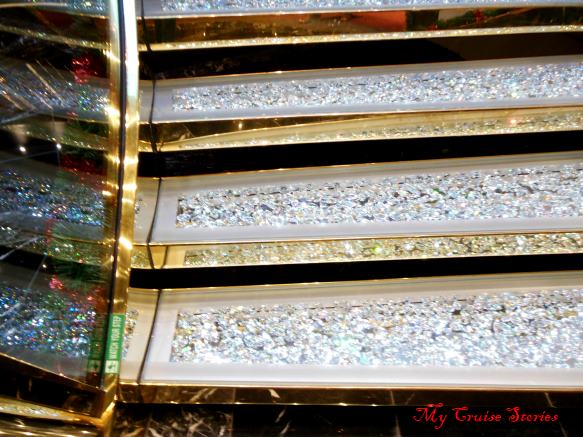 In the high class private area called the MSC Yacht Club, accessible for yacht club suite guests only and defined by MSC as a ship within a ship, silver accents give way to gold, particularly on the spectacular Swarovski crystal stairway – though personally I prefer the atrium’s crystal stairway in silver to the yacht club’s gold.  The silver color sets of the sparkle of the crystal more stunningly in my opinion. 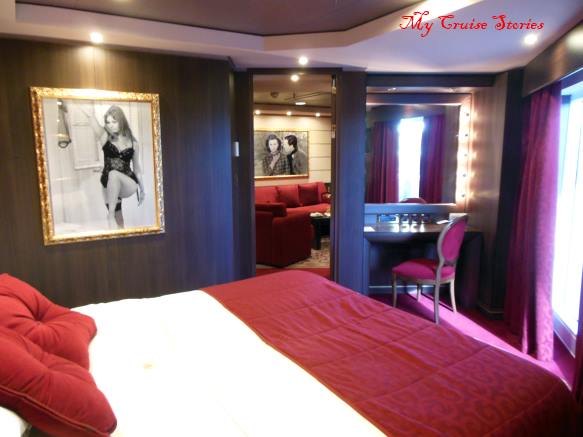 The largest and most expensive suite on the ship, named the Sophia Loren suite, was designed by the actress herself.  It has separate living and bedroom areas with burgundy colored furniture and black & white photos of her hanging on the walls. 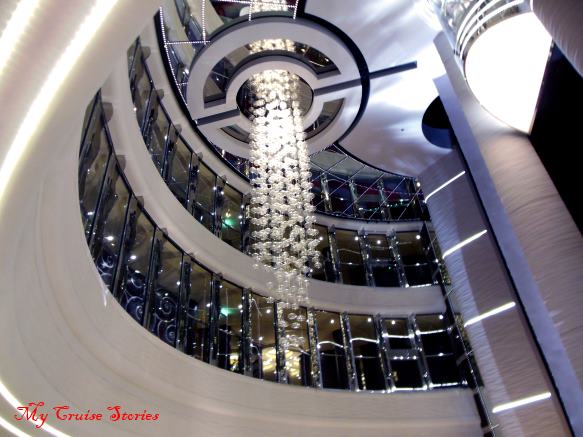 Glitzy without being gaudy, the ship decor makes use of lots of mirrors, lights, sparkles, and silver color to bring about its glamorous appearance and a hint of luxury in the public areas. 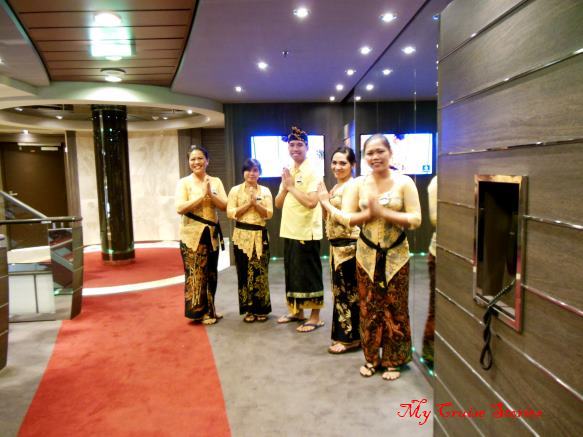 walk the red carpet into the spa 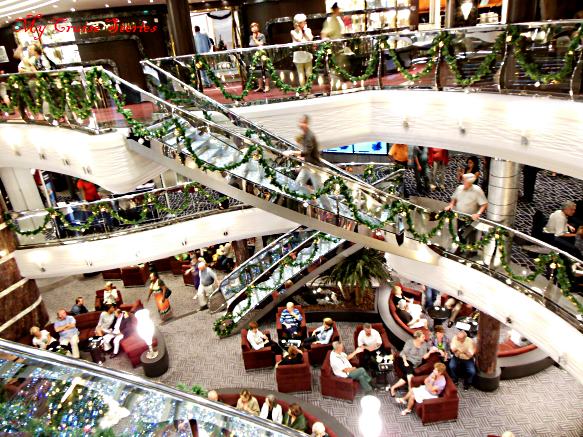 atrium on the Divina

The atrium towers several decks high.  Two flights of swarovski crystal stairs sparkle and shine their way up the two lowest decks of the atrium.  Each stair cost $3000 euros and the ship has 100 of them total including the gold ones in the MSC Yacht Club area. 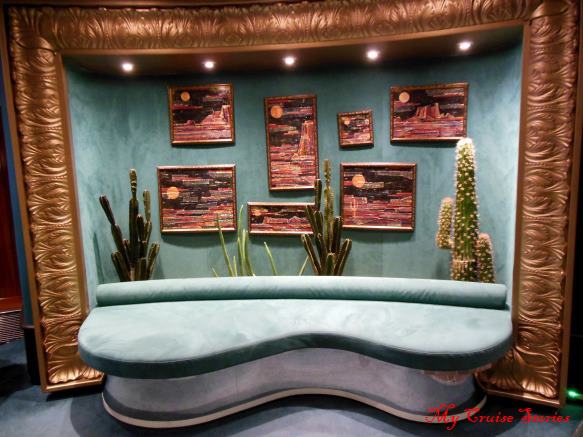 All around the ship passengers can find lots of little nooks where people can sit and relax or gather together with friends. 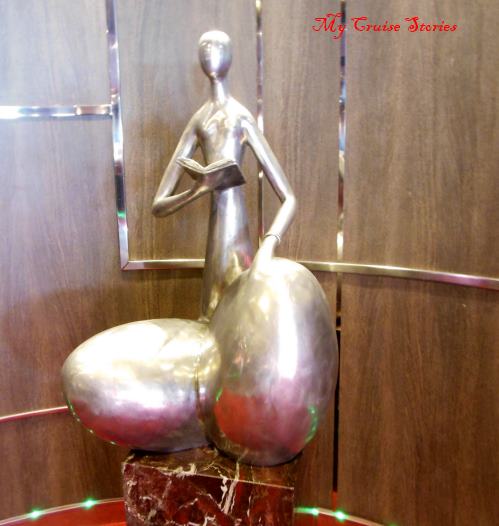 The ship did seem to have quite a number of odd statues.  At least I found them odd.  Misshapen representations of women with skinny upper halves and extremely large legs and derrieres in a variety of poses or doing various activities.  It also had a few painted masks, but other than these strange items the rest of the ship looked quite lovely. 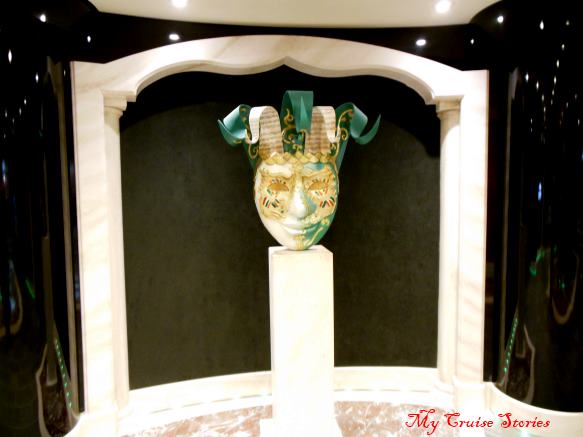 Many old black and white photos placed about the ship show a variety of famous people, most of them visiting Italy around the 1950’s and 60’s – the heyday of Sophia Loren’s movie era, though she has appeared in more recent films such as Grumpier Old Men. 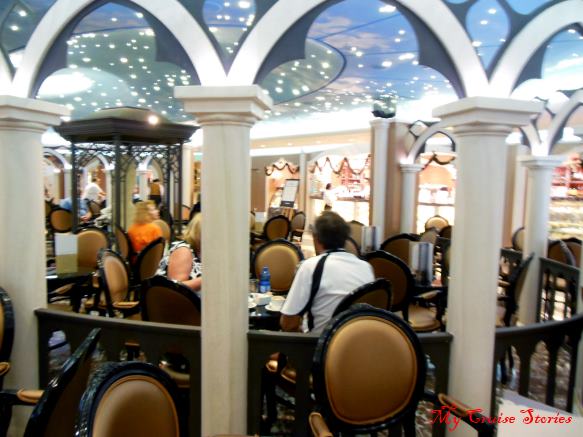 The ship had some multi-use spaces like the Piazza Del Dodge, decorated with a clouds and stars ceiling and old world café look with numerous cute little tables.  This area had gelato and sweets for sale.  It sometimes had watch or jewelry sales, demonstrations, or activities and was also used as a muster station. 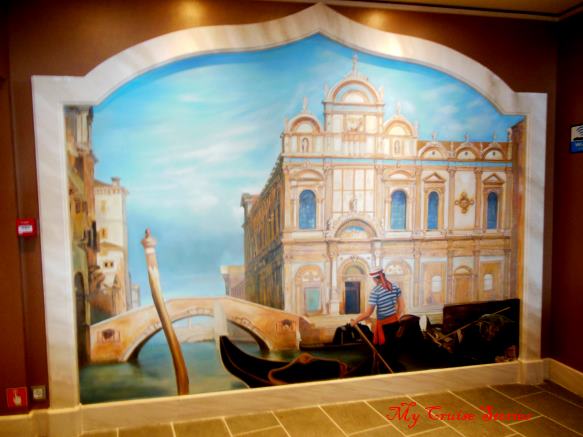 Some hallways, like those leading to the Piazza del Dodge, had painted murals. 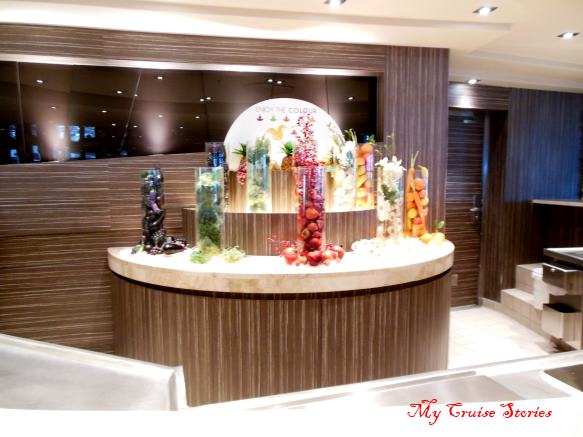 Each bar, lounge, or restaurant area in the ship had its own unique décor, different from every other bar or restaurant or the other areas of the ship.  The crew diligently kept everything clean and shiny. 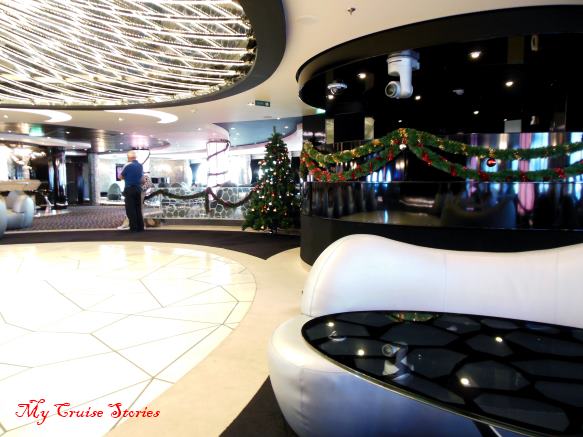 For general information about the Divina including dining room dress codes click here.

For information about Cabins on the Divina click here.

MyCruiseStories blog tells stories about adventures in cruising on ships big and small. Things to do onboard and in port. Anything connected to cruising. Also food, travel, recipes, towel animals, and the occasional random blog.
View all posts by LBcruiseshipblogger →
This entry was posted in Divina, MSC, Shipboard Life and tagged bling, cruise ship decor, Divina, MSC, photos. Bookmark the permalink.

7 Responses to Decor on the MSC Divina Cruise Ship