Posted on June 23, 2012 by LBcruiseshipblogger

It’s summer and boating season has arrived.  John’s boat spent a number of years in Canada, so it’s been ages since we’ve gone boating.  We recently had a rare Saturday that we both had free on a sunny day so he suggested taking the boat out. He’s been wondering about taking our dog, Isabelle, fishing so we brought her along to see how she’d like the boat. 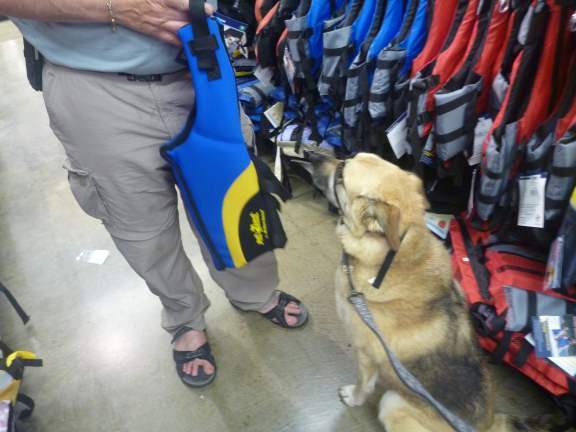 On the way to Lake Washington, we stopped at West Marine to buy a pet life vest.  The salesman in the store said one had saved his cat a couple times when it fell in the water trying to climb poles on his boat before it learned they weren’t like trees.

We went to the boat launch at Coulon Park, which neither of us had seen before.  It’s a pretty big park with lots of amenities.  It seems nice enough for anyone who can manage to stay out of the bathroom.  A venture into the ladies room found water several inches deep on the floor, deepest over the non-functioning drain which was probably clogged by the abundance of toilet paper people had thrown all over the place.  I can’t really blame this on the Parks Department though, since the next bathroom down had a woman at the sink rinsing out her child’s beach toys and pouring the water onto the floor rather than back into the sink. 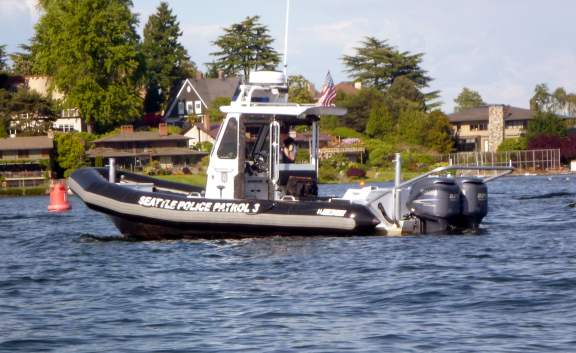 After a quick launch in one of the 8 lanes, we set out into the lake, noticing an Ivar’s restaurant right in the park.  We decided to head for Portage Bay and see if we could find the first house I ever lived in.  We passed the floating bridges and the arboretum.  Near the entrance to the Montlake Cut, we saw a Seattle boat cop hanging around pulling people over and writing tickets. 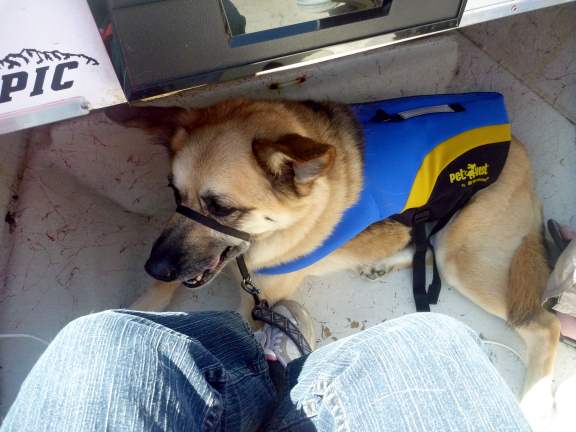 Isabelle trying to hide when the boat went fast

When the boat went slow, Isabelle would pop up and look over the side, sometimes even putting her front paws on the empty seat or the edge of the boat to see better.  When it went fast though, she crouched at our feet.  I think she would have preferred a bigger boat where she had somewhere inside to go.  Not all dogs feel that way though, we saw several riding out on the bows in a variety of boats.

Husky Stadium, home of (what else…) The Dawgs!

Husky Stadium looms large at the entrance to the Montlake Cut.  Quite a few people paddled about in rented canoes with University of Washington painted on their sides.

The bridge house on the bridge over the Montlake Cut somewhat resembles a castle.  Since we have no real castles here we have to make do with poor imitations.

Most boats fit under the bridge, but a sailboat came through so it had to open up and let it pass by.

Portage Bay is home to many houseboats.  We went down the row, knowing we had to look near the University bridge, below the Red Robin restaurant.  We found the house more by landmarks than by looks since the house has been remodeled and the houseboat in front of it stripped down to the float and rebuilt in a totally different style.  Or maybe even replaced completely.  Where the original cabin that once came from the woods sat, now an odd modern artsy structure stands in its place.  The houseboats are high dollar real estate now, but once were the cheap place where folks who couldn’t afford land houses lived.

University Bridge (with I-5 bridge behind it)

My grandmother lived in that houseboat, or at least one that sat in that spot, when I was very young and we lived in the house behind it.  We were in too shallow of water for a floating house so ours sat on pilings.  The back side opened onto a dock and deeper water, but in front looking down in the crack between the porch and the boards that held the edge of our yard, we could see water lapping at the shore.  The house has grown and changed color, but it’s still my first house. 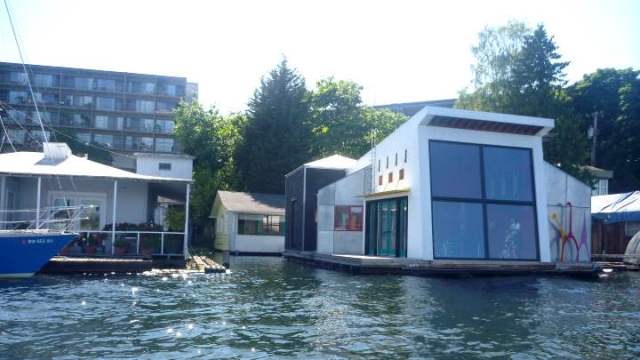 The current houseboat is too tall to see over so all we could see of the house is the end that sticks out beyond the houseboat behind its boat moorage space, which did not have a boat there at the time.

Ride the Duck in Lake Union near the Space Needle

Not far beyond the other side of the bridge in Lake Union, there’s a ramp where the Ride the Duck amphibious vehicle tour drives into the lake.  It’s a pretty fun tour.  You can even buy duck-bill shaped whistles that quack instead of whistling.  People on the ducks waved and quacked at us while we took photos of them.  The tour starts just across the street from the space needle.   The ducks make a loop on that side of the bridge, passing a row of houseboats which includes the one from the movie Sleepless in Seattle.

There’s a lot of interesting architecture along the shores of Lake Union, which is where you end up at the other end of Portage Bay.  We saw what looked like a house made out of an old ferry, and nobody could miss Gasworks Park, where Heath Ledger and Julia Stiles played paintball in the movie Ten Things I Hate About You, although it is not actually a paintball venue.  When the land became a park much of the old gasworks was left in place, historically significant as the last remaining gasification plant where once upon a time people turned coal into gas. 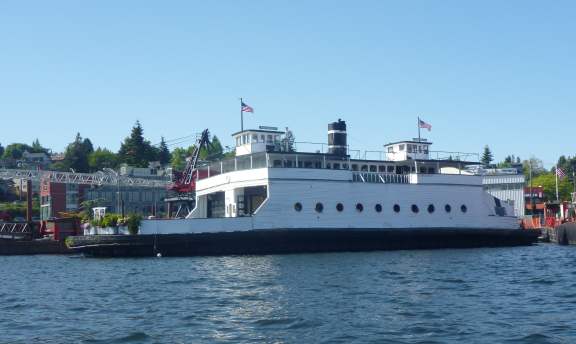 In Lake Union, we saw a couple people kayaking with dogs.  One had an open topped kayak and a big dog.

kayaking with a big dog

The other had a traditional kayak with a small dog who seemed to enjoy hiding down inside and then popping up to peek out the hole.

kayaking with a small dog

We also saw small dogs running around the sterns of larger boats tied to docks along the shore. 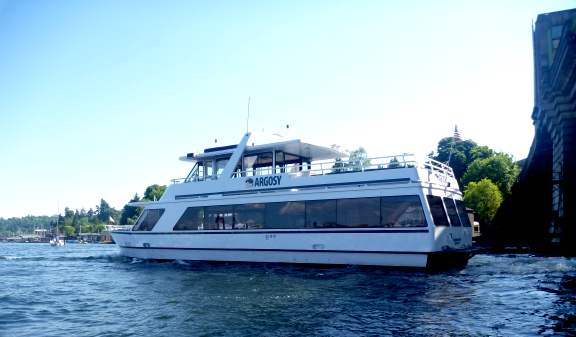 It’s not hard to get out on the lake.  There’s a variety of different cruise lines operating on Lake Union, including a paddlewheel boat.  Also small passenger ferries and rental tour boats.  Or for the more adventurous folk, seaplane rides with Kenmore Air, which has terminals in  both Lake Washington and Lake Union.  Of course dogs are probably not allowed on public tours.

I stand corrected. Apparently dogs are allowed on some public cruises.   Captain Larry Kezner was kind enough to add a comment to this blog.  He says: “Dogs are allowed on the Sunday Ice Cream Cruise, Friday Brown Bag Cruise and Saturday Lake Cruise on the m/v Fremont Avenue. Also on the Seattle mini-Ferry.” http://www.SeattleFerryService.com

After cruising around Lake Union a bit and taking some photos of the space needle, we headed back toward the boat launch.  Going back through the Montlake Cut, most everyone obeyed the speed limit and no wake zone signs.  Everyone except one larger (for a lake boat) fancy boat that looked like kids out in Daddy’s big expensive boat.  They went so fast a poor guy on a stand-up paddle board had to drop to his knees and cling on to keep from getting dumped in the water when their wake hit him.

We figured if that cop was still there, he’d catch them when they came out in Lake Washington.  They slowed down when they saw him.  I got out my camera to get a picture of the boat cop.  His blue lights started to flash.  He didn’t go for the speeders though, he headed straight for …….us.  Is it illegal to take a picture of a boat cop, I wondered. 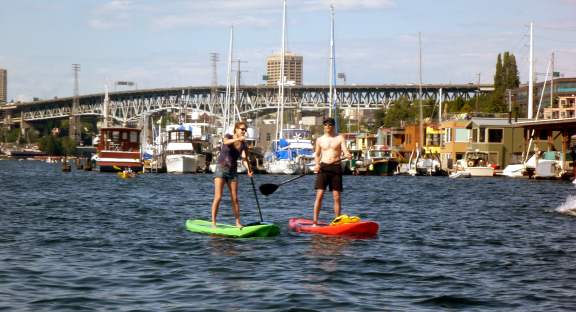 paddle boarders in Lake Union near the floating homes

We stopped and he pulled up alongside amidst Isabelle’s barks and growls.  He said he couldn’t see the registration numbers on our boat.  Apparently they are up a bit too high for his liking, kind of in the curvature of the boat’s structure and he couldn’t see them from 50 feet or so away.  This is a 1980’s boat and the numbers are in their original location.  It’s never been a problem before, but he said they should get lowered next time the boat is up for registration renewal.  Meanwhile we mentioned thinking he’d stop the kids and he said he knew exactly who we meant, but they’d slowed way down when they saw him.  So obviously he knew they’d been speeding, but chose to go after us instead.

Back at the boat launch, a guy in a boat that pulled up to the dock next to us asked if the cop was nice to us.  He was surprised the cop stopped us rather than the kids too.  At least we didn’t get a ticket.  I wonder if they actually can write a ticket for not liking the location of the registration numbers.

10 Responses to Boating with Dogs