How to Make a Towel Cake

Posted on March 23, 2012 by LBcruiseshipblogger 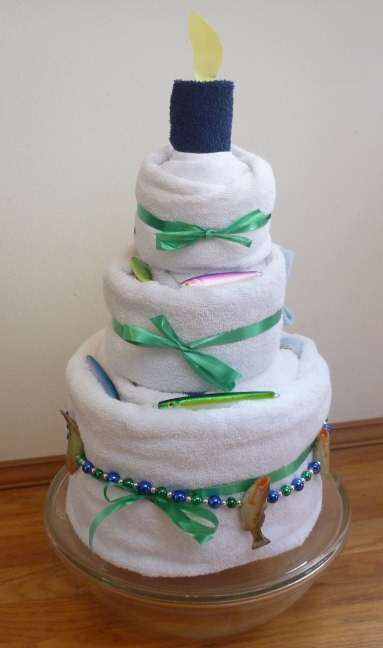 Many cruise ship passengers look forward to returning to their cabin each night to find a new towel animal.  I’ve been posting blogs about how to fold towel animals for awhile.  Something that keeps reoccurring in my google hits is “towel cake.”  I finally got curious as to just what is towel cake?

I posted the question on my facebook page.  One of my towel animal fans responded with the answer that people fold towels into cake shapes for giving them as gifts at wedding or baby showers.  I think the towel cake would make a great gift for a housewarming party too.  My daughter posted a link with some great pictures of bridal shower towel cakes, and instructions on how to fold them on her blog. Unfortunately neither her blog nor the site that link went to still exist.

The cakes looked a lot easier than the towel animals, and I’m pretty good at folding them, so I thought I’d give it a try.  Not having any sort of occasion to make a gift of towels to anyone for, I thought I’d just make a birthday towel cake instead since it is my husband’s birthday.  A no-calorie cake that won’t make anybody fat!  Of course it’s not exactly edible either.

To make the towel cake you need two bath towels, two hand towels, and two washcloths.  I added my own touch to the top layer of mine, folding a third washcloth of a different color into a candle in the center.

step 2 – fold towel in half lengthwise

Pick a size to start with.  Roll one of your quartered towels until the whole thing is resembles a roll of toilet paper. 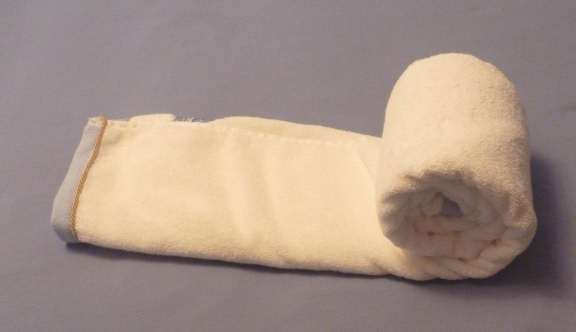 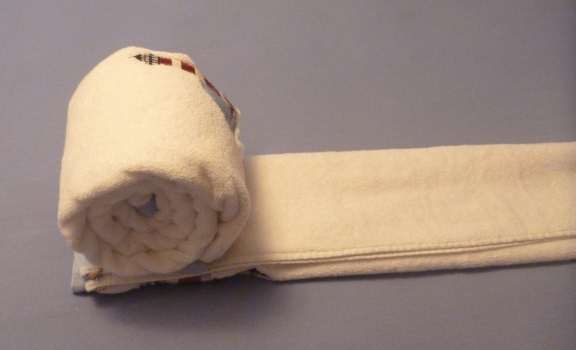 step 5 – roll the second towel around the first rolled towel

Tie a ribbon around it to hold it together.  Repeat for each of the other layers, both towels/washcloths of the same size rolled together into one layer. 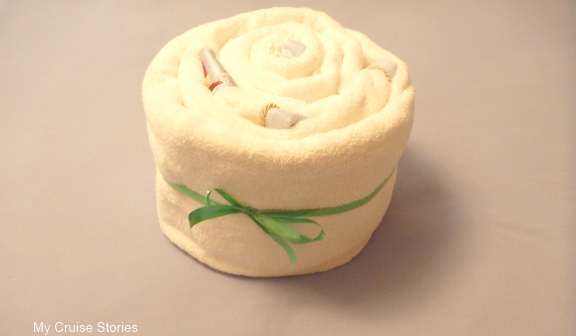 step 7 – repeat with next layer

Stack it up like a layer cake with the bath towels on the bottom, hand towels in the middle, and wash cloths on the top.

Decorate the towel cake appropriately for the occasion.  Bridal shower towel cakes often have plastic flowers, lace, or strings of beads on them.  A baby shower cake could be made from either baby towels or diapers.  Decorate with pink or blue ribbon if the sex of the baby is known and adorn with things like booties, rattles, and other small baby items. 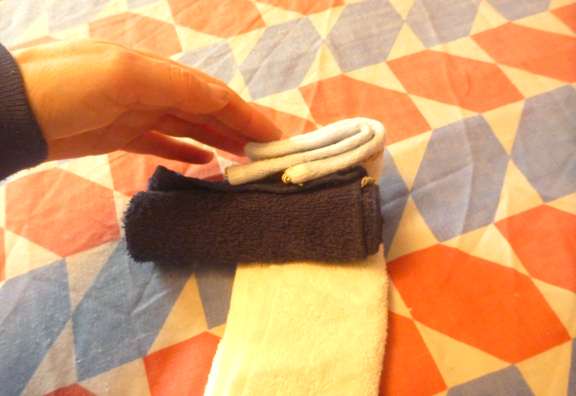 roll the other washcloths around the candle washcloth

My husband loves to go fishing, so I made his a bit fishy.  It has a string of beads with plastic fish interspersed between them on the bottom layer.  (Just that layer because I only had one.)  It needed some more decorations, so I added some Deep Stinger fishing jigs, and some little Point Wilson Darts.  He loved it.  He walked in the door, saw the towel cake, and said “That’s awesome.”  Upon closer inspection, he added, “Why does it have jigs on it?”  He thought for a minute, then added “Oh, is it my birthday cake?”

That just goes to show all it needs is the right decorations and no explanation needed.

3 Responses to How to Make a Towel Cake