Posted on August 20, 2011 by LBcruiseshipblogger

We stepped out of the 4-wheel drive jungle bus onto the muddy banks of Australia’s Daintree River.  Picking our way through the mud and across the makeshift plank path near the water’s edge, we boarded the waiting river boat perched stern end up on the riverbank.

bird on the riverbank

Once the entire busload of people climbed on board (and thus became a boatload of people) the boat left the shore and proceeded down the river.  All eyes watched the riverbanks, looking for any sign of the many creatures dwelling there.

Not all bats live in caves, we discovered.  Several trees came to life as the colony of sleeping bats left their upside down perches on the branches and took flight, disturbed by the noise of our boat.  They must have quite a hard time getting a good day’s sleep as ours was not the only riverboat cruising the Daintree River. 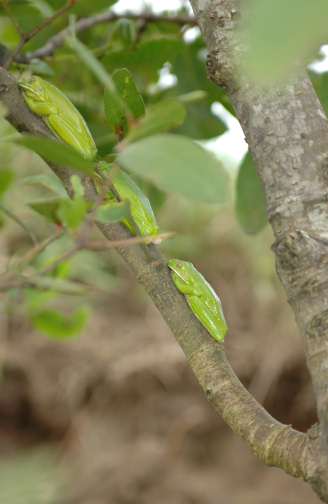 row of frogs on a branch

Farther downstream we found a tree full of frogs.  Not little ones like the Pacific tree frogs we see at home.  Pretty big for frogs.  I didn’t know tree frogs got that big.  We learn all sorts of things while traveling.

Here and there along the banks we saw lots of juvenile crocodiles.  Even adult fresh water crocs are not as big or fierce as the saltwater crocs.  Of course we did not see any of them along the banks of a river.

ferry at the dock on the Daintree River

When the ride ended, the boat docked near a steep bank.

MyCruiseStories blog tells stories about adventures in cruising on ships big and small. Things to do onboard and in port. Anything connected to cruising. Also food, travel, recipes, towel animals, and the occasional random blog.
View all posts by LBcruiseshipblogger →
This entry was posted in Australia, Day Trips and tagged Australia, bats, crocodile, Daintree, photo, River, river cruise, tree frog. Bookmark the permalink.