Posted on February 21, 2020 by LBcruiseshipblogger 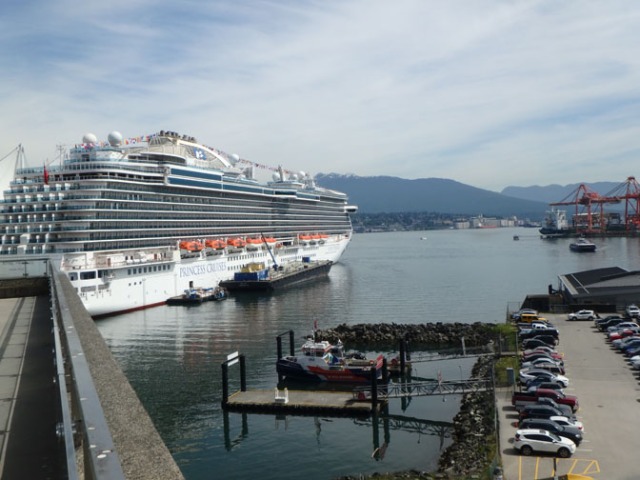 Royal Princess has a variety of cabins that have balconies, one of which is the standard balcony cabin. It also has deluxe balcony cabins and a several different types of suites with balconies. What the ship does not have is oceanview cabins. It’s missing that entire category. On the Royal Princess if you’re not in an interior cabin you have a balcony. Of course balcony cabins have an ocean view, but the oceanview category is for cabins with just a window, not a balcony. 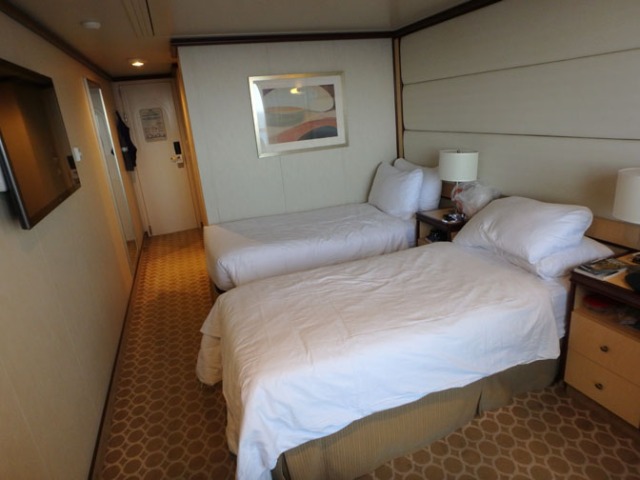 not the biggest cruise ship cabin, but it worked

Being a medallion class ship, entry into the cabins was done through the medallions that passengers had instead of key cards. The door was supposed to sense your medallion and unlock on approach, but we had to touch our medallions to the display by the doorway to get ours to unlock. Another passenger I talked to said his wife’s medallion would unlock their door from several feet away, but he had to touch his to the sensor like we did. So apparently some of them worked better than others in that respect. 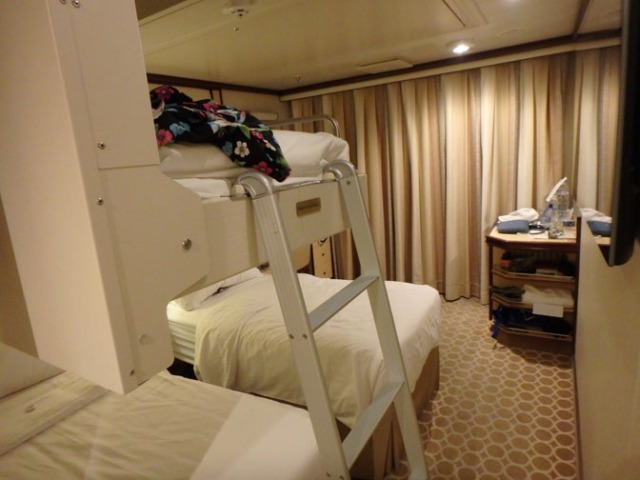 Our cabin had the standard two beds that can either be set apart as twins or together as a queen depending on who is in the room and what sort of bed configuration they want. We had 3 sisters in the room so in addition to the twin beds we also used one of the cabin’s drop-down bunks that fold up into the ceiling. Since the room wasn’t all that large and other than one chair we had nowhere to sit but the two lower beds we asked the steward to put the bunk up in the daytime and have it down just at night except on long port days when we’d be out all day. This made a bit more space in the room as it seems more open without the bed blocking so much of it, and left both lower beds open as a place to sit, which we rather needed since the room had just the one chair.

The balcony had two chairs, but for the majority of the trip one actually would have been enough out there. There was one nice day when we all 3 sat out on the balcony awhile, for which we borrowed the one chair from the room. 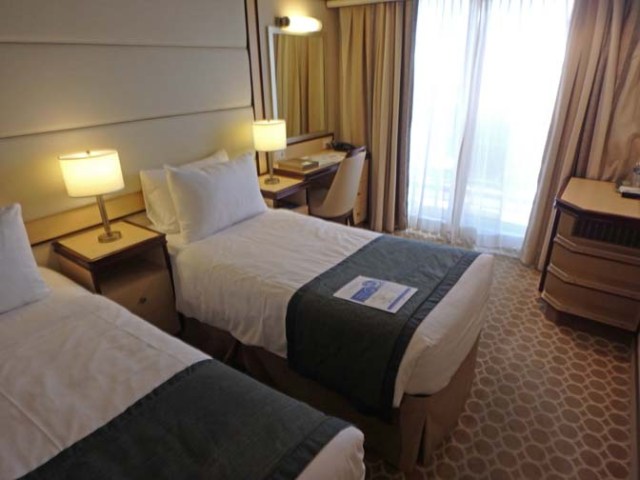 In the mornings we each had our own routine of what we thought was important for our way to start the day. I tend to wake up earlier than my sisters, and on days where we did not have a port stop first thing in the morning I went to the gym for a run on the treadmill. My preference on ships is to run on the promenade deck, but Royal Princess doesn’t have much in the way of an outside promenade deck, and the few small sections it has don’t connect to one another. Luckily their gym was open 24 hours because I run earlier in the morning than most ships open their gyms. According to their published open hours in their daily newsletter it opened later, but one of the crew people told me that was just the staffed hours and the equipment was available for use anytime.

The problem with running at that time of day was that I’d finish about the time my sisters got up and hogging the bathroom to take a shower right when they needed it wouldn’t be very nice. To solve that problem I showered in the locker room at the gym. The showers there looked nice with big square rainshower showerheads, but they did have a major problem. The source of hot water must have been quite distant from the gym because I was always nearly done with my shower before the water finally began to warm up so I spent a lot more time avoiding the chilly water than enjoying the fancy rainshower. Meanwhile our cabin shower (which I only used once the entire cruise) had nearly instant hot water.

the one bit of floorspace big enough for exercising

My sisters had their own morning routines with my younger sister ordering room service coffee that she would sit out on the balcony to drink no matter how cold the weather, even if she had to bundle up like an arctic explorer to sit out there. My older sister claimed the one area of the room with a bit of floorspace in front of the desk and between one bed and the sliding door to the balcony for her morning exercises and yoga. They both used the cabin bathroom for all their showers so they always had a nice hot shower. I thought about trying the one at the spa, but it was quite distant from the gym and the spa wasn’t open that time of morning. I didn’t particularly want to hike pretty much the entire ship between working out and showering so I never did check to see whether or not the locker room at the spa would be unlocked that early. On most ships the spa and gym are in the same area and share a locker room, but on Royal Princess they are on different decks and opposite ends of the ship so each has its own.

big open closet and small closet with shelves and a door

The cabin had a lot of storage space with a good sized open closet next to a small skinny closet with shelves and a door, 2 nightstands with drawers plus the same set of drawers in the desk, and shelves between the countertop and the floor on one end of the counter over the little refrigerator. They all divided well by 3. There were 3 shelves under the counter, 3 in the bathroom, and 3 that had about the same amount of room not taken up by a safe in the tall skinny closet (plus an extra one there). The two nightstands and desk made 3 sets of drawers. The one thing the room didn’t have was enough room under the beds for all 3 suitcases because most of the space there was taken up by bedding for the second bunk that we weren’t using. Two of them fit, but that left the third one taking up space in the closet. They were all about the same size so we couldn’t fit one into another. 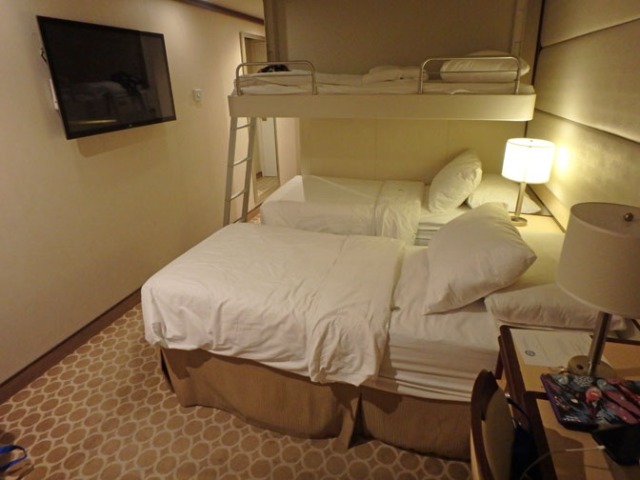 cabin with the bunk down

While the cabin would have been a bit cramped if we actually lived there, it was just a one week cruise and we didn’t spend a lot of time in the cabin so it was fine.