Posted on March 23, 2018 by LBcruiseshipblogger

Cruising In A Suite 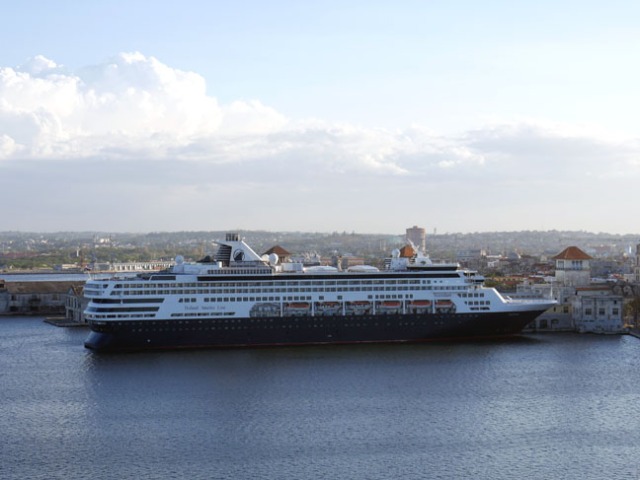 I’ve cruised with Holland America a number of times, but somehow in spite of starting out from quite a variety of ports, and seeing many of their other ships in port here and there, I always end up on one of the same ships I’ve been on before. This was the case with a recent Caribbean cruise on the Veendam out of Fort Lauderdale, on which I previously sailed for a New England cruise out of Boston. 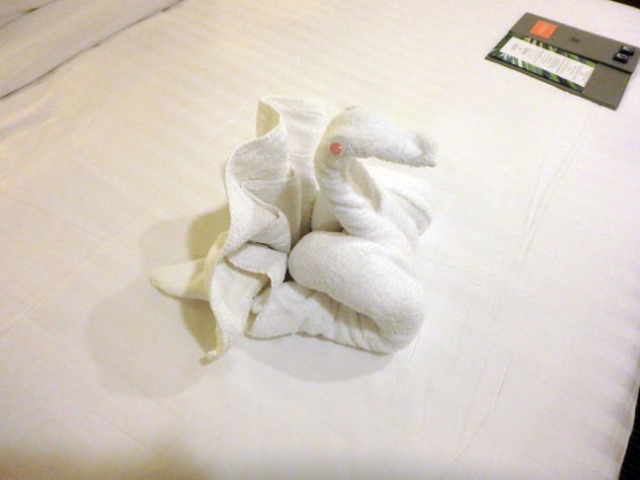 Cruise ship cabins come in a variety of sizes and amenities to suit any budget, as do cruise ships themselves. Holland America doesn’t have mega giant ships like some lines, but even for them Veendam is one of their smaller ships, though not the smallest. While we haven’t ever gone with the super high-priced luxury cruise lines, we have sailed with a number of standard lines. We’ve also gone with different room choices among inside, ocean view, and balcony staterooms. Being mostly budget cruisers, we’d never stepped up a level and ventured into the territory of suites. 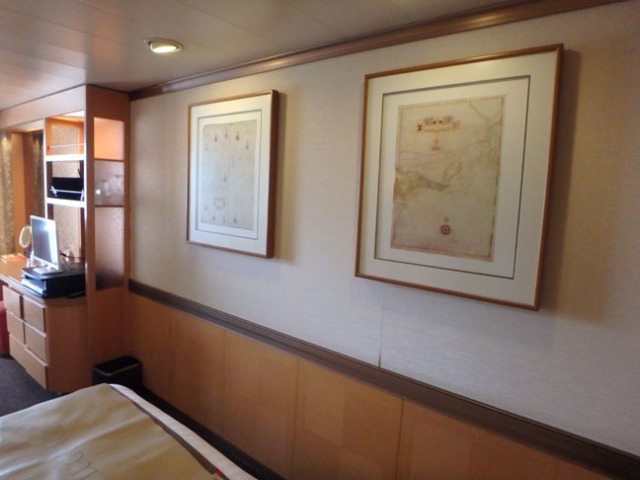 artwork in the room consisted of maps in a foreign language

Wanting to see Cuba while travel there is still an option for Americans, we booked a one week Caribbean cruise that included a port stop in Havana on the Veendam through our most used source of cheap cruises, vacationstogo.com. Our initial booking was category guarantee, ocean view or above. For the most part we’ve gotten pretty good rooms going through category guarantee rather than choosing a specific room. As well as a better price there’s always the possibility of getting assigned a room above the category booked at no extra charge. There’s also a higher likelihood of receiving a call from the upgrade fairy. Which isn’t usually a free upgrade, but an upgrade at a lower cost than the offered room would be if booked directly. 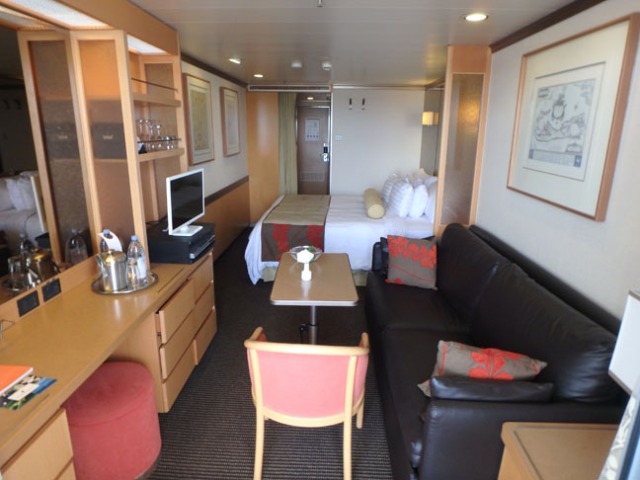 Vista Suite on the Veendam

While I would have stuck with what we originally booked and taken our chances on whatever room we got assigned had I answered the phone when the upgrade fairy called, John took the bait when they offered an upgrade to a suite. As I mentioned before we’ve never stayed in a suite so he thought it would be fun to give it a go, and it was. Even though there was a charge for the upgrade we figured we might never see a suite offered at that price again since it was considerably lower than the advertised price and actually less than it often costs for a week’s cruise in a balcony cabin. 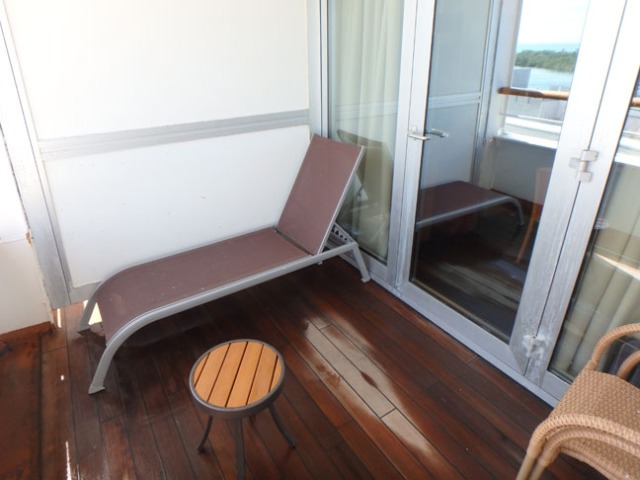 It was of course at the bottom level of the types of suites available on the Veendam. On a lot of ships they’re called mini suites, but on the Veendam they are Vista Suites. They’re nothing like the Pinnacle Suite, which is somewhat like an apartment and bigger than our house. Not even the Neptune Suite, which is significantly larger than regular cruise ship cabins. Mini, or in this case, Vista, suites are more like a larger than average balcony cabin. They do come with some of the perks of larger suites though. Not the priority check in or free laundry, but this one did come with concierge service, though we never used it. Besides being a bit larger of a room, the balcony is more than double the standard size and included a lounger as well as two chairs and a small table. Apparently some of the people who stay in larger suites snub the vista suites though. I overheard one passenger talking to a vista suite steward in the hallway by those rooms. He recognized the steward from a previous cruise and was telling him he deserved a promotion up to the suite floor one deck above. Not even acknowledging that the steward already worked on a suite deck. 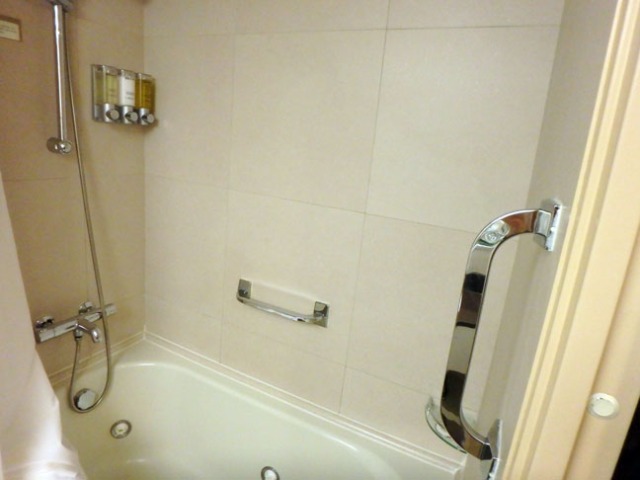 jetted tub in the Vista Suite

The bathroom includes not just a bathtub (which is standard on Holland America in anything other than inside cabins), but a jetted tub. It’s also a shower so they could have designed it a bit better by putting the rather large washcloth rack at the end of the tub away from the shower rather than at the middle where it sticks out in the way of anyone standing there. It’s very nice to have a jetted tub though. I could get used to that even if it didn’t feel very spacious and I’m a small person. The one problem with having a tub/shower combo is that they put the dispenser for shampoo, conditioner, and body wash up high where it is convenient for showering, but you have to stand up to get any when taking a bath – unless you have your own products which you can then set on the small shelf in one corner of the tub at a much more convenient height. 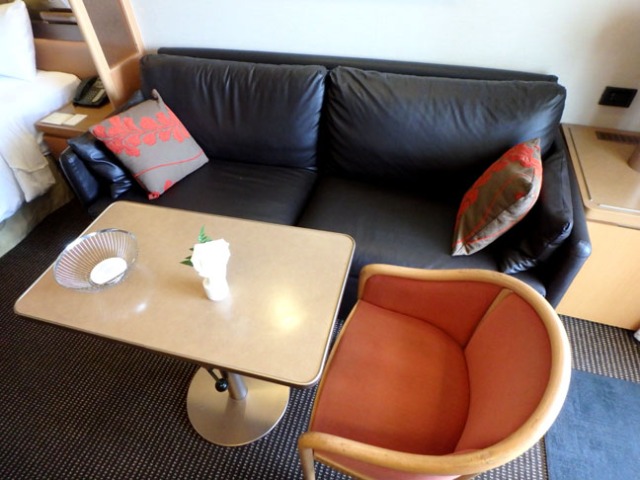 The room had a small refrigerator, also standard on Holland America. Of course it comes full of mini-bar items they want you to buy, but you can have those removed or just work around them if there are other things you want to put in there instead. This room came with the most storage space we’ve ever had in a cruise ship cabin. Which makes sense because it was bigger than the average cruise ship cabin. It has 4 little closets. 2 with a hanging bar and full space to hang things with just top and bottom shelves, and 2 that have more shelves and less hanging space. One also contains the safe. 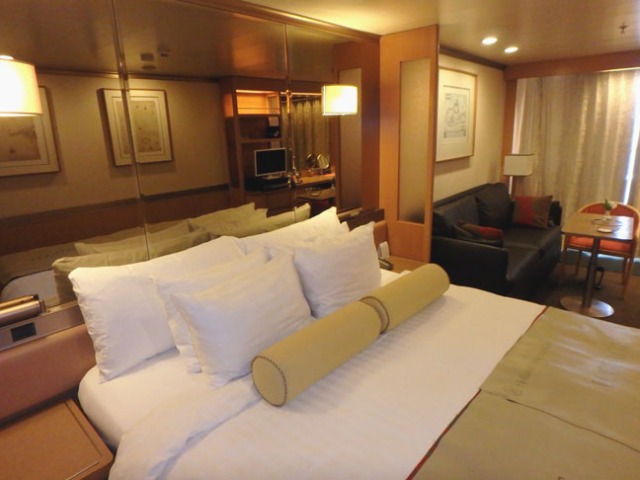 pillow collection on the bed

Nightstands on either side of the bed have 2 drawers each, as well as drawers at the foot end of the bed – which itself seemed bigger than usual. The bed was piled with a variety of pillows of varying sizes and softness so people can pick whichever one is most comfortable for them to sleep on at night and have the whole pile to lean on if they sit on the bed during the day. The desk area also had 3 sets of 3 drawers each. The room had enough storage space available that we didn’t even use it all. There were also a couple shelves above the TV. One had a few glasses on it, but the other was just open and available for storage. 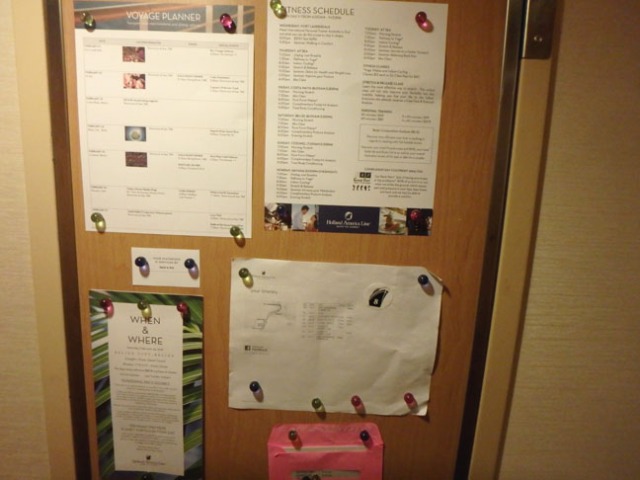 It also had a full sized couch, a little table with a chair, and a stool under the desk. The hallway to the bathroom and closet area had a curtain to close it off from the main part of the room if desired. Veendam is an old enough ship that the walls are not magnetic. Even on older ships the bathroom and cabin doors are magnetic so there’s still somewhere to hang paperwork if you bring magnets. Hanging stuff keeps it organized and out of the way. I print out the itinerary before we go and hang that up along with any excursion tickets we might have and anything else deemed important, like the daily newsletter with its schedule of available activities for the day. 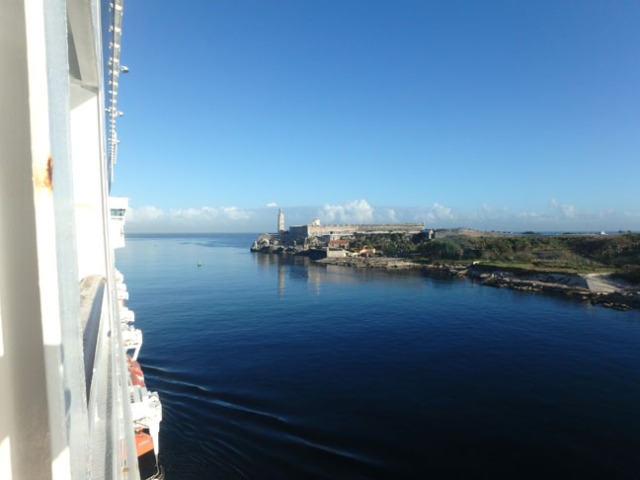 view from the balcony while sailing out of Havana

For suite guests the steward came by the first day with slippers and a Holland America beach bag. He filled the ice bucket twice a day and left chocolates and a towel animal each night, which they also do for cabins that are not suites. The biggest advantage of this room for us was the oversized balcony, which was a great place to sit and read or watch the ocean go by.