Posted on June 15, 2016 by LBcruiseshipblogger

For a totally intriguing dining experience when sailing with Celebrity try dinner at their unique specialty restaurant, Qsine. It is a premium restaurant with a surcharge, but you can save money by booking on a port day when the price is lower. Qsine makes dinner fun with everything from the whimsical décor to wondering how the next dish will be served. Part of the eclectic room on the Infinity has light fixtures made of lamps hanging upside down from the ceiling. The other end has a large chandelier with plenty of supports to keep it from swinging with any movement the ship might experience.

At Qsine the fun starts with the menu

Once seated, Qsine’s guests receive a menu resembling an ipad. Food orders come family style for the table rather than individually for each person, but each person’s rectangular plate and tiny silverware gets replaced for each dish. The waiter brings a dish of tasty rolls to munch on while waiting for the first dish. 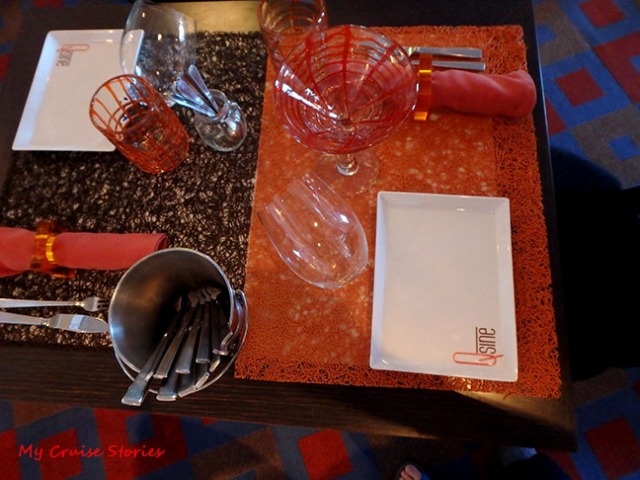 The menu has 20 choices, some of which come in a small taster size with just one item in a unique container. Other selections have a variety of items served in interesting ways and the one choice could make a whole meal by itself. You can order as many as you like, though it would take either a really big appetite or a lot of wasted food in order to try everything in one meal. Each menu choice comes served in its own special way, none of which involves food just sitting on an ordinary plate.

Spring rolls come springs, one of the many whimsical serving dishes at Qsine.

The disco shrimp comes served in a clear ball with flashing blue light, which shines brightly in the restaurant’s low lighting, which seems about as bright as candlelight though it has no candles.

Persian Kebob served on a sword

The Persian kebob has chicken and veggies skewered on a sword. 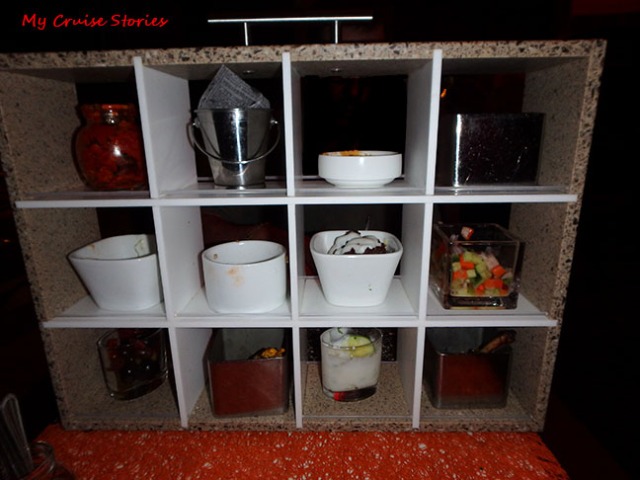 Taj Mahal Mediteranian selection comes in a wooden container with a separate little compartment for each item. Our waiter referred to that one as the “Barbie house” because of its resemblance to the tiny rooms of a dollhouse. The lamb chops in this one were one of the best things we tried.

Another favorite was the potato croquettes, a ball of breaded and deep fried mashed potatoes available either with the popcorn fish-n-chips (which comes in a popcorn box) or the crunchy munchies where different sorts of potatoes each occupy a paper cone on a stand. This comes with French fries, sweet potato fries and homemade vegetable chips as well as the potato croquettes. 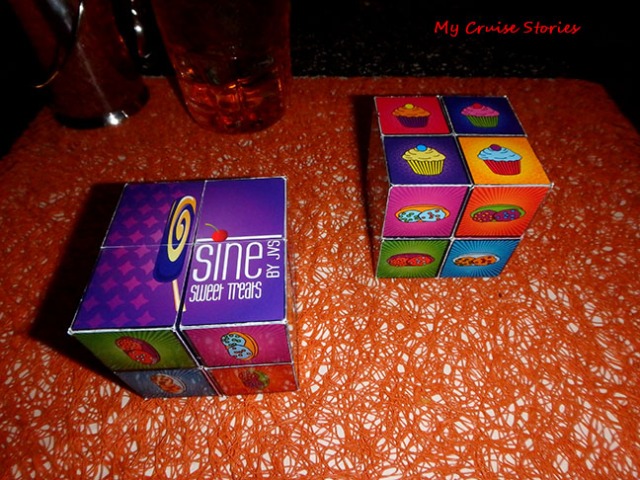 Sushi comes as lollipops. The waiters also come around with marshmallow lollipops which they pass around to whomever wants one. After eating all that they come around with the dessert menu, which looks a lot like a Rubik’s cube and unfolding it into a variety of positions reveals new dessert options at each fold. Selections include things like cupcakes that you decorate yourself, a chef’s surprise which was warm pineapple upside down cake the night we ate there, and the best ever chocolate tombstone which consists of chocolate mousse sitting on a crispy rice bar and topped with chocolate ganache.

It’s hard to pick a favorite from all the tasty items served in unique and entertaining ways, but if I had to pick just one the fantastic chocolate tombstone would probably rise to the top of the list.