Posted on June 11, 2015 by LBcruiseshipblogger

Legend in Port Arthur in the fog

On our cruise to Tasmania, Carnival Legend made its first stop at Port Arthur on a gray cloudy day.  Normally it costs money to see the historic buildings there, but the ship’s tenders brought us right to the dock in the historic site and nobody asked for any money from passengers coming ashore.  Perhaps the entry charge was included in the port fees for that stop.  Whatever the reason, the Legend’s passengers could roam freely through Port Arthur at will.  Ship’s crew offered a free guided tour or people could walk about on their own.  We started out with the tour, but did not stick with it long because my 3 and 5 year old grandkids did not keep up with the tour guide well enough for us to hear anything after the first stop or two.  Luckily we were also given some written information.

ruins of the prison and military buildings

It started to drizzle a bit as we first left the tender, making us wonder if we should have brought our raingear ashore.   It probably wouldn’t have been worth it though since mainly it just sprinkled on off and on with no heavy rainfall. 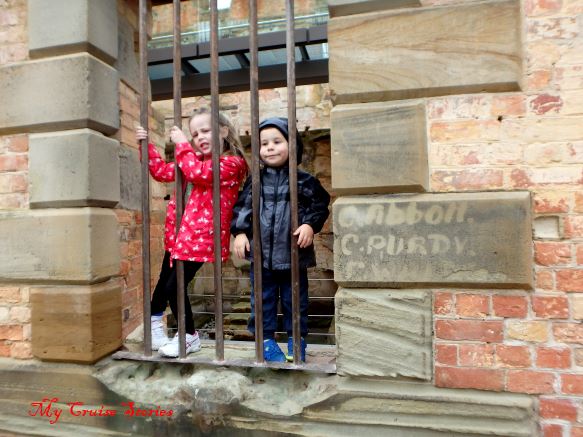 Hannah and Daniel in prison

The kids enjoyed exploring the ruins of the prison and standing in a barred window like prisoners wishing for escape.  In its current condition the prison would not hold anyone as it had no roof and some walls missing.  It is undergoing restoration to preserve what they have left. 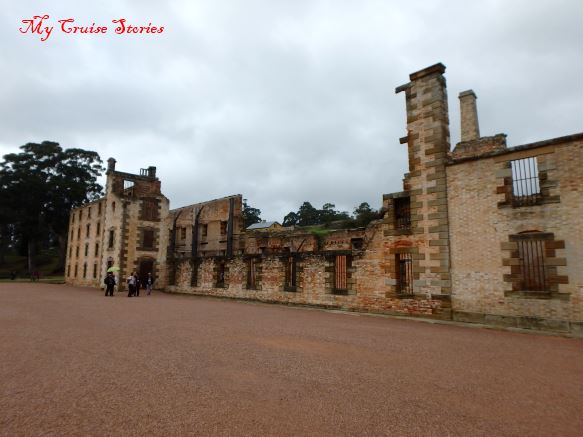 Before the colonists the Pydairrerme people occupied the land where Port Arthur now sits.  The area still has Middens and other cultural sites from their thousands of years of living there.  They still populated the area at first contact with Europeans, but none were known to remain on the Tasman Peninsula beyond 1830.

passengers from the ship flock to the ruins

Port Arthur started as a timber station in 1830.  From 1833 to 1853 the hardest British and Irish criminals – those who re-offended after arrival in Australia, and rebellious prisoners ended up doing hard time at Port Arthur.  Their intent to grind rogues into honest men meant hard labor and forced religion for the prisoners.

Some of the jobs prisoners had to do included working the timber with gangs of men chained together carrying trees on their shoulders.  They built many of Port Arthur’s buildings including making the bricks themselves.  Prisoners built ships at the dockworks and for a time ran a flour mill which was later turned into the large penitentiary whose remains now dominate the landscape. 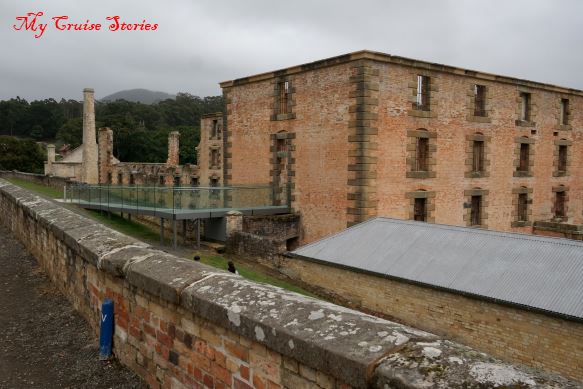 Harsh punishments included public floggings with 50-100 lashes from a cat-o-nine-tails (9-ended whip).  Port Arthur was considered inescapable.  The peninsula it sits on makes the site naturally secure on most borders, and no prisoner could cross the narrow isthmus connecting it to the mainland as it was fenced and guarded by soldiers, man traps, and half-starved dogs.  If hard physical labor didn’t keep the prisoners in line, Port Arthur had a worse place to send them.

nothing left inside most of the penitentiary

The separate prison, intended to reform the worst of criminals, was just as likely to drive them insane.  Prisoners spent 23 hours of each day isolated in a single cell where they ate, slept, and worked.  One hour each day they could exercise alone in a high-walled yard.  On Sundays guards brought them blindfolded one by one to church, where they sat in isolated cubicles where they could see no-one but the priest and were not allowed to talk to one another through the walls. 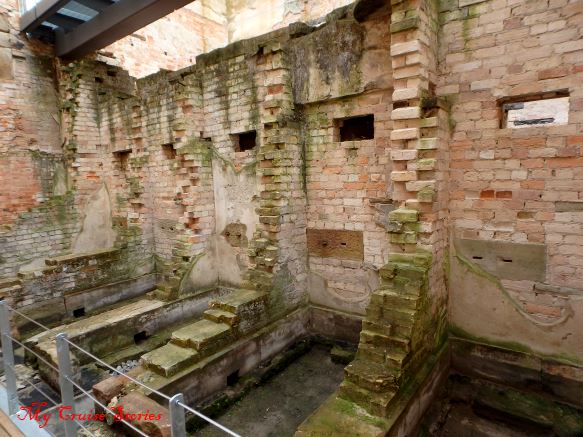 some remaining structure on the inside of the penitentiary

In its later years as a prison between 1853 and 1877 the prison housed many geriatric prisoners.  It was abandoned in 1877, but remains one of the more historically significant places in Tasmania.

The Port Arthur historical site covers many acres and has over 30 buildings, ruins, or other places of interest including a nearby coal mine.  Some visitors to the area take ferry tours out to see Point Puer Boy’s Prison – where juvenile offenders from 9-17 received an education wrought with stern discipline and harsh punishment.

inside the Commandant’s house

Ferries also bring tourists to the Isle of the Dead where around 1100 people from all walks of life at Port Arthur found their final resting place between 1833 and 1877.  Prisoners, military, and civilians including children are buried in graves on the island cemetery.  Industrial accidents and respiratory disease brought about by sleeping in cold cells in wet clothing were the most common causes of death in prisoners.

looking at the Legend through the ruins

We saw just a small section of buildings, the penitentiary, police station, military officer’s quarters and guard towers, and the commandant’s house (which was later a hotel and a boarding house).  As we left the commandant’s house the wind whipped up and the sky threatened torrential rain.  A group vote sent us back to the ship rather than exploring further and risking a major soaking.  We didn’t see any snakes, but a man who worked there said while they hide in bad weather, on sunny days they are everywhere.

MyCruiseStories blog tells stories about adventures in cruising on ships big and small. Things to do onboard and in port. Anything connected to cruising. Also food, travel, recipes, towel animals, and the occasional random blog.
View all posts by LBcruiseshipblogger →
This entry was posted in Australia, Carnival, Legend, Ports of Call and tagged Australia, Carnival, cruise, history, photos, Port Arthur, prison, ruins, Tasmania, travel. Bookmark the permalink.