Posted on March 18, 2014 by LBcruiseshipblogger

One of my favorite blogs that I read regularly is called Lame Adventures.  She writes about her everyday experiences in a humorous way.  Before getting into my story, I have to give credit to the Lame Adventures blog for the title of this one and the idea of making my tragic moment into a blog story. 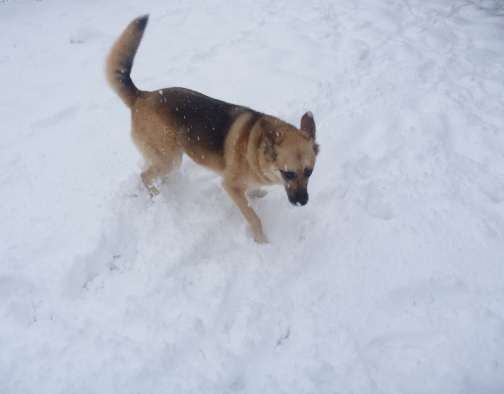 I have a pretty good-sized dog.  Isabelle is a German and Australian shepherd cross (or as my son calls her, the international shepherd.)  About 55 pounds.  Yesterday I took her out for a pee break.  On the way back to the house I noticed the neighbor’s dog Jake outside of his fenced yard.  Neighbor here is not that close since each property has several acres.

As I headed toward the escaped dog he ran out in the road into the path of an oncoming car.  I started running in his direction hoping to get him into his yard before the car got there.  I jog with my dog sometimes and she runs along beside me without causing any trouble.  I hadn’t bothered to cross to the other side of the street though, and she’s used staying on the dirt strip alongside the pavement rather than running on the road itself.

Isabelle ran along quietly until she noticed Jake on the loose and got all excited.  She took a sudden turn and ran right in front of me, launching me over top of her back for a hard landing on the pavement.  I broke the fall with the non-leash holding hand and can barely move that arm now.  Also got a skinned knee and swollen cuts above and below one eye.  The car went around first Jake then me and Isabelle then went on its merry way without stopping to see if I was OK, though they must have seen me fall.

I managed to get up and get over to Jake’s place to put him inside his yard.  I had intended to go up to the door and let his owner know he’d been out, but was too dizzy by that point to do anything more than open the gate, let him in and latch it shut.

I got about halfway back home before my dizziness got to the lay down or fall down point so I crossed over the ditch between the street and my yard and laid down in the grass to recover.  Passing out from things like injuries runs in my family and has happened to me before.  I learned the hard way when that feeling comes I can’t ignore it.  Meanwhile a truck went by and this one stopped to ask if I was OK.  I didn’t know my face was bleeding until the guy in the truck said so.  I didn’t want the guy to think he had to get out of his truck and carry me back to my house or something so I got up and barely made it back to the house in time to lay down again on the other side of the door.

Once the dizziness passed I found that I could hardly move my left arm.  It’s not easy to do things with only one functioning arm as I discovered in trying to do pretty much anything all evening.

Jake escaped again shortly after and I still can barely move my arm this morning.  My hand is swollen and the fingers are all purple.  The cuts and swelling around the eye look worse too, but it’s the severe lack of mobility in the elbow that worries me. Now I’m faced with having to visit a doctor, which is a daunting prospect since my health insurance has a $4000 deductible so is basically the same as no insurance at all.

4 hours at the walk-in clinic later I’m sitting here with my arm in a splint and a sling.  I have to wait up to two days to hear from the orthopedist I was referred to just to get an appointment to find out if he can set the bone and put a cast on it, or if it requires surgery with a pin put in it.  Sounds expensive.   A lot of money spent each month (mainly by my employer) to pretend to have health insurance does not help much when it is actually needed.

I’ve heard an old saying that no good deed goes unpunished and at this point I may be inclined to agree.

Update:  A visit to an orthopedist brought the news that my options are surgery or no surgery, neither of which will restore a full range of motion to that arm.

More about this story in The Things We Take for Granted and Not All Therapy is Mental.

MyCruiseStories blog tells stories about adventures in cruising on ships big and small. Things to do onboard and in port. Anything connected to cruising. Also food, travel, recipes, towel animals, and the occasional random blog.
View all posts by LBcruiseshipblogger →
This entry was posted in Randoms and tagged dogs, injuries, life, useless health insurance. Bookmark the permalink.

15 Responses to My Lame Adventure