Posted on February 17, 2013 by LBcruiseshipblogger

One major thing Cruise Ship passengers can always look forward to on any cruise ship is the food.  Norwegian Pearl has a variety of food options including the main dining rooms and buffet available at no extra cost, so those who prefer not to spend any extra on food during their cruise can eat well.  They also offer plenty of specialty restaurants that do charge extra as another dining option.  We mainly stick to the free eateries, and had many tasty meals there on the Pearl.

One night though we tried something different and had dinner at one of the pay-extra eateries, Teppanyaki, a Japanese style grill.  At the appointed time of our reservation, a representative from the restaurant came out to the waiting area to lead us and the others dining at our table inside.  There we all sat at one of four tables, each surrounding three sides of a very large hibachi grill.

Everyone’s heard the phrase dinner and a show.  When eating at Teppanyaki dinner is the show.  Each table has its own chef, and reservation times for the start of a meal for that particular table.  After our group got seated around the table and menus passed to each of us, our table’s chef came out to start the show.  Once people finished using the paper menu to order from, they had the option of folding it following the origami instructions on the other side.

egg creature on the grill

First he did tricks with eggs and a very large knife.  Eventually the eggs ended up on the grill, where they got joined by a large pile of rice.  Once cooked he blended the eggs into the rice, but not until after he had shaped them into something resembling some sort of animal and chopped them into bits. 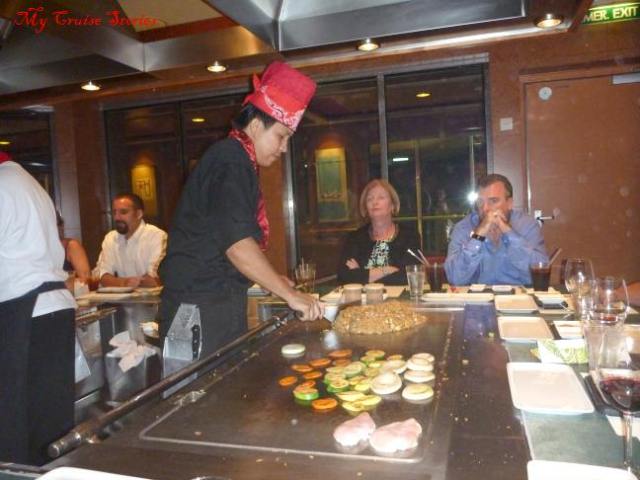 veggies on the grill

The chef added vegetables onto the grill.  A stack of onion slices became a volcano before a flash of steel from the chef’s knife divided it into separate piles to add to the other vegetables and serve to the guests.

While we watched him cook the rice and vegetables, a waitress served the miso soup and seaweed salad courses.

Chef at work with the meats

Next the chef served the rice and vegetables to all the waiting guests while he set about cooking whatever main courses people had chosen from the menu.  I had the chicken yakiudon and apparently enjoyed it too much to bother to stop eating and take a picture since I don’t seem to have one.

Throughout the whole process he impressed everyone with his knife skills.  Teppanyaki would be worth the extra charge just for the show alone, so it was rather a bonus that we liked the food as well.

Following dinner we had a choice of fruit sashimi or green tea cake for dessert.  In spite of the very green color, the green tea cake and ice cream tasted quite good.

Teppanyaki is one of the more popular pay extra eateries on the Norwegian Pearl, and after having eaten there I can certainly see why, and would recommend this experience to other folks who plan to book a cruise on the Pearl or any other Norwegian ship that has the Teppanyaki restaurant.

You are about to experience the Japanese style of cooking called “Teppanyaki”. Our chefs will show off their amazing skills by slicing, dicing and juggling while preparing delicious meat, poultry, fish and vegetables on an iron “Teppan” griddle.

Select your choice of one of our Teppanyaki Classics or Combination Main Courses. All choices are served with Garlic Fried Rice
and Japanese Teppanyaki Vegetables with our Onion or Creamy Mustard Dipping Sauces

Choose one of the following: