Posted on September 24, 2011 by LBcruiseshipblogger 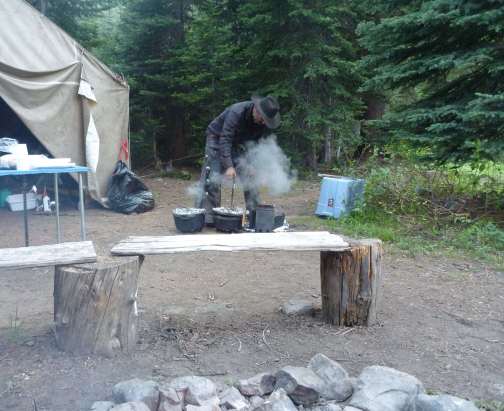 On a recent pack trip with Icicle Outfitters, I had all sorts of adventures.  My sister, niece, and I stepped out of our car and into a different world after meeting up with our guides at their ranch and then riding into the wilderness from a trailhead halfway up a mountain.

moving the dutch oven with special tool, the can in front heats the briquettes

We rode to a glacier, fished in a high mountain lake and stream, saw meadows full of vividly bright wildflowers, and experienced up close the aftermath of a forest fire from several years past.  One say we rode to an old historic trapper’s cabin.  Our camp had daily visits from deer and birds.

At mealtime we had a new kind of adventure.  I’d heard of dutch ovens, but never actually seen one in action.  Aaron, our guide, said he loved dutch oven cooking so much he even cooks that way at home.

Our first evening in camp we got settled into our tent after a long day’s ride to get there, not really paying a whole lot of attention to what Arron or our other guide, Bailey did while we set up our sleeping bags and things.  We left the tent to find Aaron standing next to a stack of iron pots covered in charcoal briquettes.  From those pots he produced salmon, bread, green beans, and a fruit cobbler.  Quite a tasty introduction to dutch oven cooking.  Another night we had pork chops.

Aaron said he could make anything in a dutch oven, including birthday cakes, which he had from time to time.  I would imagine he often cooks steaks, but since they cater to the dietary needs or requests of the guests and 2 of the 3 of us don’t eat beef, we did not have that sort of thing.  If they take out a group of vegetarians, they don’t cook meat at all.

For breakfast we had fresh baked cinnamon rolls straight from the dutch oven, and in a different one, oatmeal.  Another morning we had a dish that included potatoes, eggs, and ham.  We also had bacon every morning.  He fed us well.

At one meal I brought my camera, to photograph whatever came out of the pot, which happened to be something he called Sheepherder’s Stew.  He served it over rice, with salad and bread on the side and a peach and pineapple cobbler for dessert.

He had a can sitting next to his stack of dutch ovens that he used to get the briquettes burning before putting them on the ovens.  He also had some long handled tools used for moving the pots and removing the lids.

“Cooking with briquettes”, he said, “is an exact science, while using coals from the fire means guesswork.”

The size of the dutch oven as well as the material it is made out of determines how many coals to use.  For a 12 inch cast iron dutch oven, 15 coals on the top and 9 on the bottom makes 350 degrees.  Aluminum pots need an extra 4 coals top and bottom.  For either another 2 briquettes (one top and one bottom) raise the temperature 25 degrees.

A 14 inch cast iron dutch oven takes 17 coals on top and 11 on bottom to reach 350 degrees.  For every additional 2 inches of pot size from there add 3 more briquettes top and bottom for 350 degrees.

Bread or biscuits means changing the ratio to prevent burning the bottom of the bread.  They take just 4 coals on the bottom and 18 on top for a 12 inch cast iron dutch oven.

He shared the recipes for the meal I took photos of, and everything he made tasted wonderful. 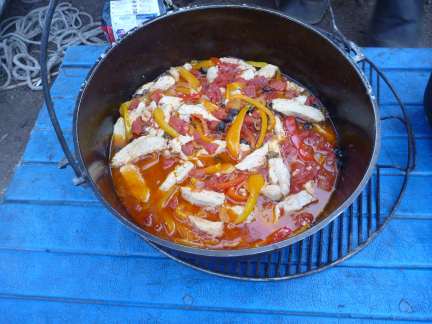 saute veggies above in butter

a pound or so of boneless skinless chicken, cut in strips (use more or less depending on how many people you are feeding and how much they tend to eat)

brown chicken in a skillet 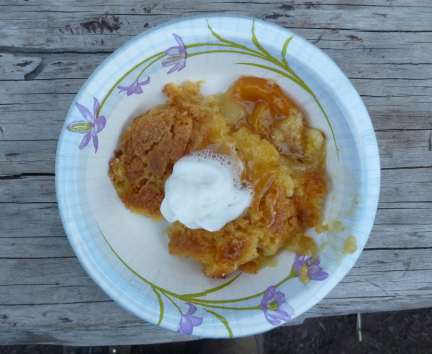 mix peaches, pineapples and pie filling in dutch oven.  Dump cake mix over top, straight from the box, not mixed with anything.  Put 6 pats butter on top and cook 35 minutes in 350 degree dutch oven.

For easy clean-up line the dutch oven with aluminum foil.